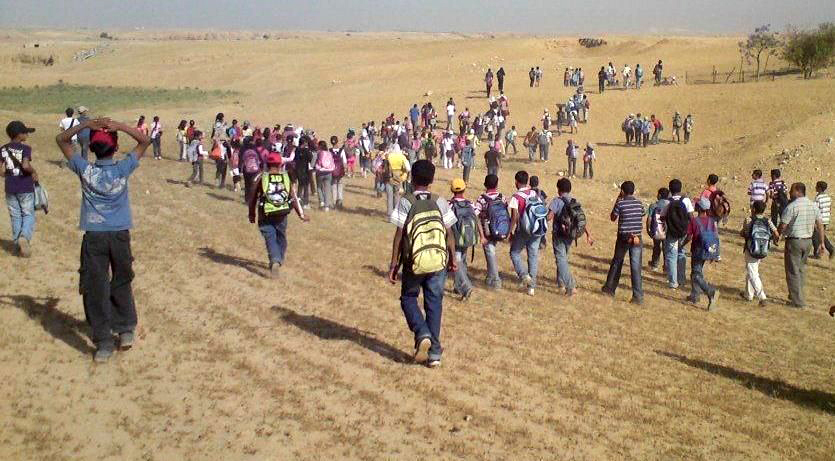 Adalah (‘Justice’ in Arabic) is an independent human rights organization and legal center. Adalah’s mission is to promote human rights in Israel in general and the rights of the Palestinian minority (20% of the population), in particular. This work includes promoting and defending the human rights of all individuals under the control of Israel, including Palestinian residents of the occupied Palestinian territory.

Once you learn about the plight of the Bedouin in Israel, Adalah asks that you join them to build on these statements and contribute to the growing campaign by doing the following:

Action #1: Spread the word about the Bedouin people in the Naqab (Negev)

Raising public awareness about the plight of the Bedouin citizens in the Naqab is the first step to counter many myths about the community and to recognize the urgent need for action to stop Israel’s plan of forced displacement. Share Adalah’s reports, photos, videos, and other materials with as many people as you can.

Action #2: Call on your representatives to demand justice for the Bedouins

Contact your parliamentarians, government officials, local council representatives, civil society organizations, and other influential actors to raise their concerns about the situation in the Naqab and to demand that Israel stop the forced displacement of the Bedouin citizens. Use Adalah’s materials and try to reach as large an audience as possible.

Since the establishment of the state of Israel in 1948, the Bedouin citizens of Israel in the Naqab desert have faced a state policy of forced displacement, home demolitions, and dispossession. Traditionally, the Palestinian Bedouin lived as herders across the Naqab, herding camels, goats, and sheep. Today, over 80,000 Bedouin citizens live in roughly 36 “unrecognized” villages that either predate the establishment of the state, or were created under Israeli military rule in the early 1950s. The state denies the inhabitants of these villages access to basic services such as water, electricity, sewage, education, healthcare, and safe roads. The state deliberately withholds these services in order to “encourage” the Bedouins to give up their ancestral land.

In 2011, the Israeli government approved the Prawer Plan. The fundamental aim of the plan is to forcibly displace the Bedouin citizens in the unrecognized villages to concentrated, government-planned townships in the northern Naqab, and to expropriate their lands. In 2013, following popular demonstrations and extensive international pressure, the Israeli government froze legislation that would have facilitated the discriminatory plan through law. However, toward the end of 2016, Israeli Minister of Agriculture Uri Ariel declared his intention to promote an amended version of the Prawer Plan in the near future, which is in fact little different from the original plan.

Despite rejection of the plan by much of the Bedouin community, and strong disapproval from the international community, the Prawer Plan is being implemented on the ground. Israeli authorities are demolishing and razing hundreds of homes, structures, and agricultural fields every month, and thousands of Bedouin families are being evicted or coerced into leaving their lands. The plan is therefore grossly violating the rights of Bedouin citizens to property, dignity, equality, adequate housing, and freedom to choose their own residence.

Although Israel’s human rights violations in the Naqab are continuing, the campaign to halt the state’s discriminatory plans is also intensifying. In addition to local opposition from the Bedouin citizens in the Naqab and the wider Palestinian community in Israel, many international actors, groups and citizens have taken a stand for the rights of the Bedouins to remain on their lands in the Naqab and to live in dignity as equal citizens.

The United Nations and the European Parliament both criticized the original Prawer Plan and called for its cancellation. The United Nations Committee on the Elimination of Racial Discrimination (CERD) urged the Israeli government to withdraw the Prawer Plan on the grounds that it was “discriminatory” and would “legalize the ongoing policy of home demolitions and forced displacement of the indigenous Bedouin communities.”1
Further, in a report released in February 2014, the U.S. State Department called the treatment of the Bedouin one of Israel’s “most significant human rights problems,” noting that relocation  would require them “to give up claims to land they had [inhabited] for several generations and would separate them from their livelihood.”2

Adalah’s experience shows that international, media, and public pressure can have a crucial and tangible effect in preventing Israel from carrying out its policy of forced displacement.

For example, on November 21, 2016, the community in Umm al-Hiran received word that the Israeli authorities would begin to demolish houses and to evacuate the village the next day. A team from Adalah, alongside other partners, went to Umm al-Hiran and stayed overnight in the village to bear witness to and document the events. Adalah issued press releases and updates on its Facebook and Twitter pages, and mobilized dozens of journalists and activists to come to the village.

As a result of the mass publicity, including the presence of Arab members of Knesset and the international media, the demolition was averted that day. If it was possible to prevent the state’s plans that day, then it is also possible to do so for all the unrecognized Bedouin villages, so long as we maintain our strong and sustained advocacy and media work.

In December 2016, Ahmad Abu Al-Qi’an was forced by Israel to destroy his own home in Umm al-Hiran, one of the 36 unrecognized Bedouin villages in the Naqab. “All these houses you see are my family’s houses,” says Ahmad as he looks over the ruins. “There were 12 houses.”

The families of the Abu Al-Qi’an tribe, who currently live in the twin villages of Atir and Umm al-Hiran, were initially expelled in 1948 from their lands in Khirbet Zubaleh that they had cultivated for generations. During the 1950s, the Israeli military governor ordered them to move to their current lands to establish their village. Despite this, to this day the state has not legally recognized the new village, nor provided basic services.

In the 2000s, the Israeli government advanced a plan to expand a man-made forest called “Yatir” (sponsored by the Jewish National Fund) over the ruins of Atir, and to establish a new Israeli Jewish town called “Hiran” over the ruins of Umm al-Hiran. The state seeks to expel the 1,000 Bedouin residents to the impoverished Bedouin township of Hura.

In May 2015, after a 13-year legal battle represented by Adalah, the Israeli Supreme Court decided by a 2-1 majority to authorize the state’s plan to demolish the villages.

Months later, the Israeli police arrived at Ahmad’s home and coerced him into signing a deal to demolish his own house, threatening that they would do it by force and impose a heavy fine if he did not comply. In return, Israel promised a housing solution for his family in Hura. “They came at midnight and threatened me,” Ahmad explained. “I asked them, ‘Where am I supposed to go?’ They told me, ‘Sign here. We aren’t going to argue now. Just sign it.’”

Ahmad’s family was then evicted to an empty plot of land without electricity or running water. They now live in tin shacks they built by themselves. “What kind of life is this?” asks Ahmad. “It’s better to die than to live like this.”

Smuggle a sheep to Israel! Minister of Agriculture and Rural Development Uri Ariel needs to know that the Bedouin people should be free to control their own communities. You can send a picture of a sheep (or goat or camel) to Uri Ariel. You can draw a sheep, or find a photo on the internet. Get creative and write a message on your picture such as the phrase, “If you really want to respect the Bedouin people, their lands, traditions, and communities, abandon the Prawer Plan!”

You can send it via fax at +972 03-9485835 or via email at (mankal@moag.gov.il). Next, share the picture you sent on Twitter, Facebook, or Instagram and encourage others to carry out the same action. Include a link to this page of the Kumi Now website along with the hashtags #AbandonthePrawerPlan, #KumiNow, and #Kumi46.

“A Prayer to the New Year” by Fadwa Tuqan

In our hands is a fresh yearning for you,
In our eyes songs of praise and unique melodies,
Into your hand as choral offerings we will thrust them.
O you who emerge as a sweet fountain of hope,
O you who are rich with promise and desire.
What is in store for us that you hold?
What have you got?
~
give us love, for with love the treasures of
bounty within us burst forth …
with love our songs will grow green and will flower
and will spring with gifts
riches
fertility.
~
give us love, so we may build the collapsed universe within us
anew
and restore
the joy of fertility to our barren world.
~
give us wings to open the horizons of ascent,
to break free from our confined cavern, the solitude
of iron walls.
Give us light, to pierce the deepest darkness

And with the strength of its brilliant flow
We will push our steps to a precipice
From which to reap life’s victories.

By Fadwa Tuqan, a famous Palestinian female poet of the resistance. As translated by Lena Jayyusi and Naomi Shihab Nye and published in Desert Songs of the Night: 1500 Years of Arabic Literature, edited by Suheil Bushrui.