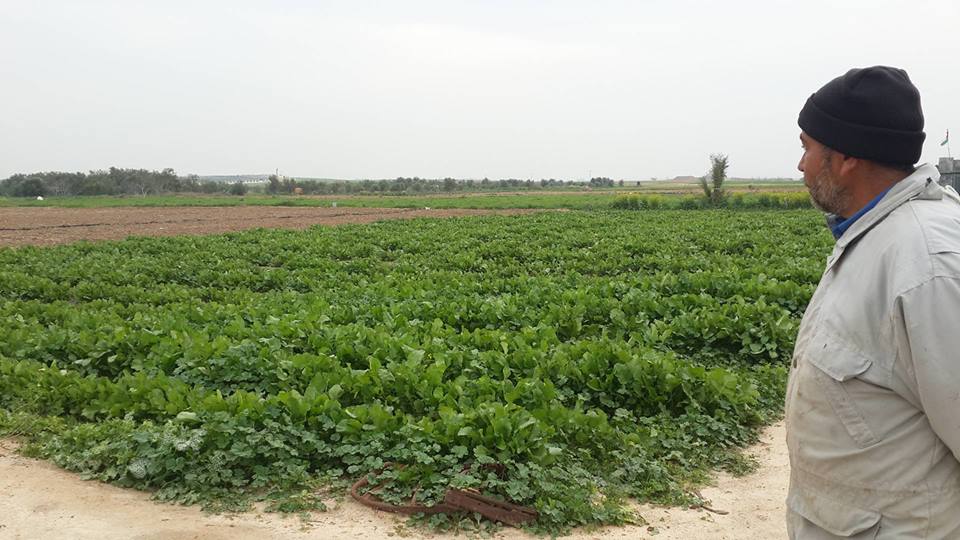 Palestinian farmers across the occupied Palestinian territory face a number of unnecessary challenges, including settler violence, the destruction of olive trees, land seizures by the military, industrial pollution from Israeli factories, and walls and checkpoints that keep them from working their land. Farmers in the Gaza Strip have been most affected due to the destruction of the 2014 Israeli offensive. Aid Watch Palestine is working to monitor the aid dollars that are meant to assist Gaza farmers. Here’s what you need to know about farmland in Gaza and what you can do so that together we can rise up.

Aid Watch Palestine (AWP) is an independent, Palestinian-driven initiative that stimulates and supports efforts to make international aid more accountable to Palestinians—starting with reconstruction of the Gaza Strip. They invite the Palestinian community and aid actors – local and international, public and private – to join them in critical and constructive scrutiny of aid. Together, we can utilize aid to advance the Palestinian cause and focus on long-term solutions.

To achieve this vision, AWP works to ensure that:

Aid Watch Palestine estimates that around $68 million of aid money was disbursed to cover part of the damages to the agricultural sector due to the war. Most of the interventions by donors were directed to help the victims of aggression, small farmers, fishermen, and owners of animal pens.

1 Factsheet: Impacts of each Israeli Occupation’s Summer Offensive 2014 and Delayed Reconstruction on the Agricultural Sector in the Gaza Strip, found at http://pngoportal.org/en/266.html

Our feet stuck in the mud of the farmlands along Gaza’s eastern border; falling down was inevitable. I got up, wiped the mud stains on my clothes, and continued walking through 250 dunams of farmlands owned by the Ministry of Awqaf (religious endowments) and rented to a number of farmers.

One of those farmers, Mosaad Khalaf Habib, accompanied Aid Watch Palestine through those farmlands to assess precisely the farmers’ losses and follow up on the reconstruction process of the Gaza Strip.

Habib says: “I had a number of eggplants, pepper, and tomato crops back in 2014, all of which were completely leveled and destroyed. In 2014, I got a written financial statement estimating my losses of about $14,470, but it remained a dead letter as no financial compensation is paid for the agricultural sector. They attributed the problem to the Palestinian division between the ‘two governments’ in the West Bank and Gaza Strip. The Ramallah government refuses to send the money so that the Gaza government doesn’t seize it.  As you can see, the only victims are the farmers, particularly those living in the buffer zones.”

He continues: “Since 2000, which marks the beginning of the Second Intifada, no one could reach those 5 dunams up there as they are right next to the eastern border. In the 2008 war on Gaza, the buffer zones were repeatedly invaded by the Israeli occupation forces. Their tanks and bulldozers were crossing into our lands, leveling it and shelling our water well. We documented everything but we didn’t receive any compensation in return.”

Habib says, “In 2014 war on Gaza, the Israelis shelled the well again as well as the farmlands and irrigation networks. The Red Cross and other organizations assessed our losses but gave us nothing till now. We are starting over again now so that we can feed our families.” Habib adds, “When they come to assess our economic losses, they assess everything including the damaged houses, lands, and cars. Then, they approve a specific sum of money equaling our losses and include it in a paper statement that remains as said before a dead letter.” Habib affirms, “The farmers are crucially in need for monetary compensation so they can continue working.”

He adds, “There are many fertile farmlands, but there are no irrigation networks available and therefore, we can’t get use of it.”

It is worth mentioning that Habib is a father of a twelve-member family comprising 5 boys, 6 girls, and a wife.

Habib continues, lamenting the “chemicals emitted from the Israeli missiles which burned our lands and weakened it. In addition, the Israelis leveled all the trees in the area in 2008 forcing farmers to start over again each time.”

On this year’s crop Habib says: “The crops this year will be few as a result of the Israeli unjust practices. After they sprayed crop-killing chemicals on our crops, and we started over again, they flooded our new crops with water. We call upon the Ministry of Agriculture and the governments in Ramallah and Gaza to help farmers and compensate them for their losses so that we can continue working and pay our debts.”

This week, commit to writing in bold and big letters the hashtag #OpenGaza on every piece of paper currency you come across. The more bills in circulation with this message, the more people will see it. Respect currency laws if able. Alternately, you could write #OpenGaza on every assignment you turn in, prescription you write, business card you hand out, email you send, etc. Take pictures of whatever you write on and post them to social media. Include a link to this Kumi campaign page and the hashtags #OpenGaza and #KumiNow.

This is the sort of action you can take all year! Have #OpenGaza printed on your next order of business cards, etc. Share your creative ways of making this an ongoing action by posting your ideas on social media using the hashtags above. Include a link to this page of the Kumi Now website along with the hashtags #OpenGaza, #KumiNow, and #Kumi23.

“The Seed Keeper” by Fawaz Turki

pour acid onto our songs

the blood of our massacred people

muffle with your technology

the screams of our imprisoned patriots,

our grass and soil

raze to the ground

every farm and every village

our ancestors had built,

destroy every city and every town

every tree and every home

every book and every law,

flatten with your bombs

erase with your edicts

can find a place to hide.

Do that and more,

I do not fear your tyranny.

I guard one seed

my forefathers have saved

that I shall plant again

By Fawaz Turki, a poet, essayist, author, and commentator from Haifa. As published in Anthology of Modern Palestinian Literature, edited by Salma Khadra Jayyusi.