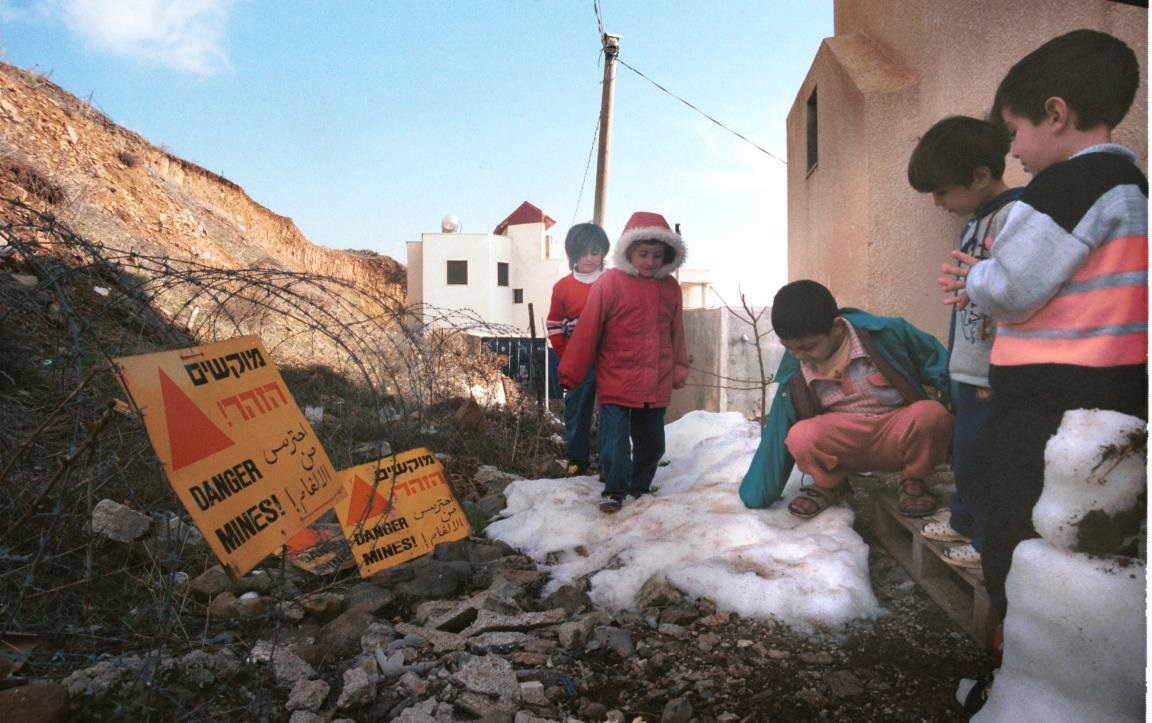 Cut in two by the 1967 Arab-Israel War, the Syrian Golan faces a wide set of problems. The Israeli government is systematically marginalizing its Syrian population in order to turn the occupied Syrian Golan into ‘Northern Israel’. Al-Marsad, the Arab Human Rights Centre, exists to protect the human rights of this marginalized population. Here’s what you need to know about human rights in the Syrian Golan and what you can do so that together we can rise up.

After you read about the history and occupation of the Syrian Golan, Al-Marsad suggests that you:

Following the Israeli occupation, approximately 95% (130,000) of the native Syrian population was forcibly transferred or displaced from their homes and forbidden from returning. Subsequently, the Israeli military began a widespread campaign to demolish homes, destroying one city and 340 villages and farms. These were replaced by Israeli agricultural settlements, often built with stones from the destroyed villages and farms. In 1981, Israel enacted the Golan Heights Law which purported to annex the territory into the State of Israel, an illegal action widely condemned by the international community.

Today, there are at least 26,000 Israeli settlers in the occupied Syrian Golan, living in 34 illegal settlements. Together with the Israeli military and authorities, they control 95% of the land. Meanwhile, the remaining native Syrian population of approximately 26,000 live in five villages located in the far north of the occupied Syrian Golan, controlling just 5% of the land.

Land appropriation and property destruction: Under the guise of the ‘Hermon National Park’ plan, the Israeli authorities are seeking to designate 20,000 acres of land around two of the remaining Syrian villages as a national park. If approved, the plan would particularly affect the largest remaining Syrian village, Majdal Shams, leaving only agricultural land in the south – a main source of livelihood – available for urban expansion. The remaining Syrian villages are already severely overcrowded due to discriminatory land and housing policies that make it close to impossible to obtain building permits. As a result, people are forced to build without permits, risking large fines and the demolition of their homes. In September 2016, Israel demolished a Syrian home for the first time in over thirty years. Subsequently, many partial home demolitions have taken place.

Illegal settlements and exploitation of natural resources: In October 2016, Israel approved plans for the construction of 1600 units in the settlement of Katzrin. This follows previous plans in 2015 to encourage 100,000 new settlers to move to the occupied Syrian Golan over the next five years. A substantial settlement agricultural industry has developed on the exploitation of fertile soil and abundant water resources. Tourism is also a staple of the settlement economy. Referring to it as ‘Northern Israel’, the Israeli government promotes the occupied Syrian Golan for hiking, camping, wine-tasting, and other recreational activities. Such activities and accommodations are almost always located in settlements or owned by settlers. Furthermore, international travel companies such as Lonely Planet, Booking.com, and Airbnb misleadingly describe the occupied Syrian Golan as part of Israel and promote accommodation and tourism in the settlements.

And in 2013, the Israeli government issued a license to a private Israeli company, Afek Oil & Gas, to conduct oil exploration in the occupied Syrian Golan. Afek proudly claims that the region contains ‘Billions of Barrels of Israeli Oil’.

Conflict in Syria: The conflict in Syria is of huge concern to the Syrians in the occupied Syrian Golan as they fear for the safety of relatives and friends across the ceasefire line and elsewhere in Syria. Furthermore, the fighting shakes the windows in villages close to the ceasefire line and the location of Israeli military bases in Syrian residential areas adds to concerns given their potential as military targets.

Landmines and military bases: Since 1967 Israel has utilized vast areas of land for military training and bases, leaving behind substantial waste, including landmines. Numerous landmines have also been laid in and around Syrian villages – often within meters of homes and where children play. In total more than 9000 acres – over 6000 football pitches – are mined.  Since 1967, at least 66 Syrians have been victims of landmines in the occupied Syrian Golan. 16 died, half of whom were children. Israeli civilians, Israeli soldiers, and tourists have also been victims of landmines.

Revocation of residency & travel restrictions: Like Palestinians in occupied East Jerusalem, the native Syrian population in the occupied Syrian Golan hold permanent residency permits. Yet while Palestinians in East Jerusalem are permitted to have Jordanian nationality, the native Syrian population are recognized as having an ‘undefined’ nationality and are only awarded an Israeli ‘Laissez-Passer’ if they wish to travel. This creates onerous restrictions and costs for international travel. The total cost of the visa process can be in excess of $500 USD. Of most concern is that visa applications are frequently denied by countries including Russia, Ukraine, the United States, and the United Kingdom.

In addition, approximately 100 people have had their residency status revoked following travel abroad for study or work, leaving them unable to return.

On his return home, Saleh remembers people in the community whispering that he “would have been better off dead than to have survived and be handicapped forever.” However, through great determination and courage, Saleh ignored such comments and worked hard to overcome his disabilities. He trained to become an accountant and is a prominent member of the Syrian community in the Golan.

Write to international travel companies such as Booking.com, Lonely Planet, and Airbnb that misrepresent the occupied Syrian Golan as part of Israel and promote accommodation and tourist activities in illegal Israeli settlements. Tell them that this misrepresentation is false advertising and violates consumers’ rights. Request that these companies comply with international human rights and humanitarian law standards and stop promoting accommodation and tourism in illegal Israeli settlements.

Share your messages to the travel companies on social media along with the phrase “Don’t exploit the occupied Syrian Golan!” Include a link to this page of the Kumi Now website along with the hashtags #OccupiedGolan, #KumiNow, and #Kumi8. If on Twitter also tag @GenieEnergy.

“In the Name of the Father” by Shay Fogelman

My political dispute with my father wasn’t resolved over the years. He’s still convinced that the state of Israel must keep control of the occupied Golan…I could easily attribute the source of our differences to his war experiences or to the generational gap between us, but things are more complicated. My father sees the Golan Heights as a homeland where Jewish history has been developing for thousands of years…I prefer to look at the future, and am positive that we must leave the Golan Heights and reach a peace agreement with Syria, even tomorrow morning if possible.

However, in recent years I’ve returned to the Golan Heights many times. I had a deep journalistic interest in the tradition of the Druze villagers and in their complex identity as a minority living under an occupation. My meetings with them produced a number of articles I published in Haaretz…

One of the investigations that yielded the most discoveries came about unexpectedly, when I heard from a Druze villager that until the war, tens of thousands of Syrians resided in a number of towns and villages in the Golan. This surprised me. In the Israeli history books and in my research on the wars in the region I never read about what became of the Syrian villages, towns and farms. My father didn’t mention a civilian population when he described the wars in the Golan, and I never saw any traces of civilian settlements on our trips, only dozens of bunkers and army camps.

For several months, I rummaged through the archives and interviewed Israeli combatants and officers and Druze still living in the Golan, uncovering secret military documents and new testimony. I found that a substantial part of the Syrian civilians living in the Golan had left their homes right after the war broke out. Most of them had left because they feared the battles, and later the IDF prevented them from returning to their homes. But I also discovered that there were instances of organized evacuation, in which the few residents who remained in the villages were put on army trucks and transferred over the border with the aid of the International Red Cross. Their homes were either bulldozed or blown up in the months after the war. Israel only left the army camps in their place, serving a widespread myth about the Fearful Golan Heights.

Unlike the other territories Israel occupied in 1967…the Golan Heights were nationalized in the early Eighties. By means of a controversial law…the government decided to apply Israeli law to the Golan. No country in the world acknowledges this annexation and the U.N. Security Council has unanimously adopted a resolution calling on Israel to annul it…

From “In the Name of the Father” by Shay Fogelman, a reporter and contributor for Haaretz Newspaper in Israel. This chapter can be found in The Holy Land, edited by Ithamar Handelman Smith.