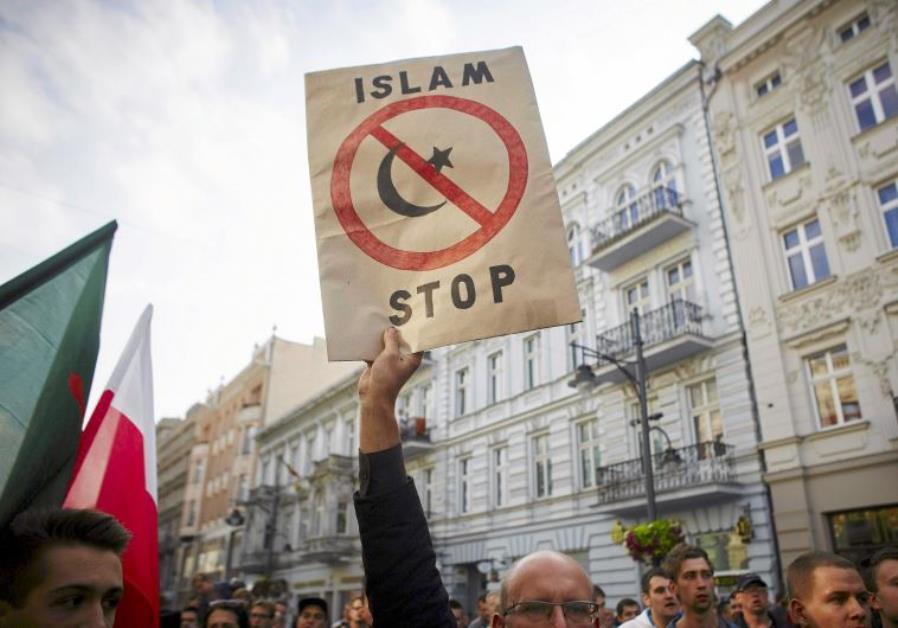 The constant slings and arrows inherent in the Israeli occupation of the Palestinian territory have all the markings of Islamophobia. While not all Palestinians are Muslim, the overarching view in Western media of Palestinians as terrorists has done nothing to build global support for the anti-colonial struggles of the Palestinians in a way that the world supported the struggles in Ireland, India, and South Africa. Al-Quds University in Jerusalem is working to define and counter this Islamophobia, particularly in how it affects Palestine’s struggle for justice. Here’s what you need to know about Islamophobia and what you can do so that together we can rise up.

The mission of Al Quds University in Jerusalem is to equip students with the necessary tools to overcome overwhelming challenges and to shape a successful future. This is made possible through the promotion of academic research and professional excellence.


Al-Quds University also aims at the development of a multicultural mindset to go with the current reality of the political and socio-economic situation in Jerusalem, since Jerusalem’s unique constitution as a mosaic cross-road of different nations, cultures and religions, giving special emphasis on introducing students especially, but the university community as a whole, to the multi-cultured heritage of human civilization.

You can find Al Quds University in Jerusalem on their website at https://www.alquds.edu/en. Or find it on Facebook at https://www.facebook.com/Alquds.edu, Twitter at https://twitter.com/alqudsu, or http://www.youtube.com/alqudsuniv. Or check out Hona Al Quds, their social media site, at http://www.honaalquds.net/en/.

Islamophobia consists of violence against Muslims in the form of physical assaults, verbal abuse, and the vandalizing of property, especially of Islamic institutions including mosques, Islamic schools, and Muslim cemeteries. Islamophobia also includes discrimination in employment—where Muslims are faced with unequal opportunities—discrimination in the provision of health services, exclusion from managerial positions and jobs of high responsibility; and exclusion from political and governmental posts. Ultimately, Islamophobia also comprises prejudice in the media, literature, and everyday conversation.

Who Are the Islamophobes?

Islamophobia is well documented in the United States, France, Denmark, Israel, and across Europe, but occurs in every country with a Muslim minority. The perpetrators can either be individual citizens or government or military officials, or Islamophobia can be embedded in company, organizational, or governmental structures and policies.

Sometimes the line between individual and institutional Islamophobia gets blurred. The following example might clarify the point:

Forty-eight-year-old Kamal Raza Butt, a Pakistani man who is visiting friends and family in Nottingham, England, is set upon by a gang of white youths. He is allegedly called “Taliban” and then punched to the ground and later dies in hospital. Two 16-year-old youths are charged with manslaughter, seven others are freed on bail pending further inquiries.

Did the mob act on the spur of the moment? The incident is presented in the media without questioning the motives. What motivated the Nottingham attack remains unclear. One thing is certain: if the roots of Islamophobia are not addressed, the problem will persist.

Institutionalized Islamophobia, on the other hand, reflects governmental laws or policies. As an example let us consider the case of secularism (laïcité) in France. While the separation of Church and State was ingrained in French law in 1905, the concept was more recently used to pave the road for a law in 2004 that prohibits the wearing of religious symbols by students in public schools. While the law bans such symbols for all religions, there is concern that the primary target of the law is Muslim schoolgirls wearing head scarves. Christians, for example, rarely wear oversized crosses as signs of their faith, and as the law only forbids “conspicuous” symbols, small items, like crosses on necklaces and small pins of the Star of David, are often allowed.

Since the implementation of the law, there have been inconsistencies in the enforcement of the law. For example, in 2015 a 15-year old girl was sent home as the school judged her long black skirt to be a sign of her faith. At that time the Collective Against Islamophobia in France “documented 130 similar cases across France since January 2014, and Ms. Ray (a spokeswoman for CAIF) said they were becoming more frequent. The cases often involve skirt length, she said, but schools have also objected to sweaters or to headbands that they say are too broad and are meant to evoke head scarves.” And in their 2019 report they documented 676 such Islamophobic acts, a 52% increase over 2018.

Incidents on the Rise

While we could discuss at length countless examples of Islamophobia, reality really sets in when we take a statistical look at Islamophobia and other religious hate crimes. Sharp increases in such hate crimes seem to have begun in the early 2000s. This rise could be attributed to the growing number of Islamophobes and Islamophobic institutions, and the normalization of hostility towards Islam. The ease with which information travels in the age of globalization takes the Islamophobic act from its local context to the international arena, thus creating an impression that there is a universal Islamophobic ethos that haunts Muslims.

Over a decade on, and in light of continuing immigration from North Africa and the Middle East and the rise of right wing parties across the EU, the situation is only worse. In 2018 the Foundation for Political, Economic and Social Research (SETA) released their “European Islamophobia Report” for 2017. In it, they provide a big picture of Islamophobia across Europe, and include a number of concerning statistics, including:

In Germany, 100 attacks occurred on mosques, 908 attacks targeted German Muslims, and there were 1,906 criminal attacks on refugees (5.2 attacks per day).

And in Austria 256 Islamophobic incidents were documented.

And in England and Wales the Home Office reported in 2018 that “hate crime has rocketed by 40 per cent in a year across England and Wales, as the number of offenses recorded hits a record high” while “more than half of religiously-motivated attacks in 2017–18 were directed at Muslims and the next most commonly targeted group was Jewish people.” Overall, the number of hate crimes “more than double the total five years ago—and all categories saw a rise.”

Seventy-Two Virgins and the Hijab

While Islamophobia takes many forms, it is most easily understood by looking at two “symbols” of Islam, one false and one real:

Perhaps the most potent symbol of Islamophobia is how easily it is accepted that Islam believes that a martyr is granted “72 virgins” in Heaven. It is a matter of fact that the “72 virgins” construct does not exist either in the Qur’an or in the most authentic of the Hadith compendia.

Mustafa Abu Sway writes, “As a person who attends the mosque on a regular basis and has listened to hundreds of Friday sermons around the world, I cannot recall even one instance when this construct was mentioned in the mosque. I tracked this construct to a book by a 9th century Muslim scholar, Al-Tabarani, in his Mu‘jam. The conclusion is that this construct does not form part of the Islamic faith, but tends to be misused by Islamophobes for their twisted reasons.”

On the other hand, Islamophobic policies target the hijab as a symbol of Islam. These policies are clearly Islamophobic, as they rarely target, or are intended to target, non-Islamic types of headscarves, such as the Jewish tichel, Indian sari, or Sikh turban (dastaar). A government that adopts the banning of the hijab or other forms of head coverings maintains a deep-seated antagonism toward Islam. The sad fact is that many countries have passed or are considering such bans. While these debates are often couched in terms of security or secularism, the reality is that the women wearing these headscarves are being targeted because of their religion.

Another type of institutional Islamophobia is the constitutional and legal structures behind which Islamophobes can hide. Attacking Islam and Muslims takes place in the name of the freedom of expression, which is protected by the First Amendment in the United States. This legal structure allows Islamophobic institutions and neo-con pundits who are driven by an irrational fear of Islam and Muslims to malign Muslim leaders and to smear mainstream Muslim organizations. When well-known Islamophobes like Jerry Falwell, Billy Graham, and Pat Robertson made defamatory statements about Islam, none are held accountable; it is not possible to try them and win according to U.S. law.

One can contrast this with their Evangelical colleagues in another part of the world. A state tribunal in Australia found two Evangelical Christian pastors who conducted a church seminar on Islam guilty of inciting hatred against Muslims. Daniel Nalliah and Daniel Scott of Catch the Fire Ministries were tried under Victoria’s new race and religion hate laws after the Islamic Council of Victoria filed legal action, charging Scott called Muslims demons, liars, and terrorists.

This trial is good news; people of conscience should help create race and religion hate laws in all countries. An alliance between the various communities is needed to combat all forms of hate crimes, including Islamophobia, which should be criminalized.

Islamophobia and the Palestinian Question

One of the organizations that systematically uses crude and vile Islamophobic statements is the Israel Hasbara Committee (an unofficial non-governmental organization). Their website features hundreds of Islamophobic articles that aim ultimately at discrediting the Palestinians and their just cause.

Only enemies of peace would continue to be against an end to the Israeli occupation. To be against the establishment of a Palestinian state could be described as an essentially Islamophobic position.

Through the week, Kumi Now will publish essays and stories from different organizations further exploring the rise and affects of Islamophobia and highlighting what they are doing to stop it.

“What was the problem?” I asked her in Arabic.

She looked at me in shock.  That often happens when I speak Arabic.

“I’m Jewish, I just happen to speak a bit of Arabic.  Are you okay?”

“Yes, it’s because I’m religious, I wear the niqab.  I get stopped every time.” Then, she switched to almost flawless English.  “I am only coming into the West of the city because I have a daughter with disabilities, and I come here to arrange aspects of her care. Otherwise, I would not come here.  This harassment is so unnecessary.”

What are you supposed to say to that?  I couldn’t give her advice or fix the problem; she is a Palestinian woman and she will be harassed by male Israeli soldiers, security guards, and police likely for the rest of her life.

She was so calm, so powerful in her forceful conviction and relaxed demeanor.  So often, we just assume that Muslim women in hijab or niqab must be submissive or meek.  Not so.

By Leanne Gale. Originally published by Mondoweiss at https://mondoweiss.net/2014/06/ordered-jerusalem-frisked/

Make it a point this week to reach out and make these connections:

“This is Not a Humanizing Poem” by Suhaiymah Manzoor-Khan

This will not be a ‘Muslims are like us’ poem.

I refuse to be respectable.

Instead love us when we’re lazy,

love us when we’re poor.

Love us when we aren’t athletes,

when we don’t bake cakes,

when we don’t offer our homes

or free taxi rides after the event.

When we’re wretched, suicidal, naked and contributing nothing. Love us then.

Because if you need me to prove my humanity,

I’m not the one that’s not human.

Suhaiymah Manzoor-Khan is a Muslim woman poet from Pakistani heritage known for her writing, plays, and spoken-word. You can watch her performance at https://www.youtube.com/watch?v=G9Sz2BQdMF8.