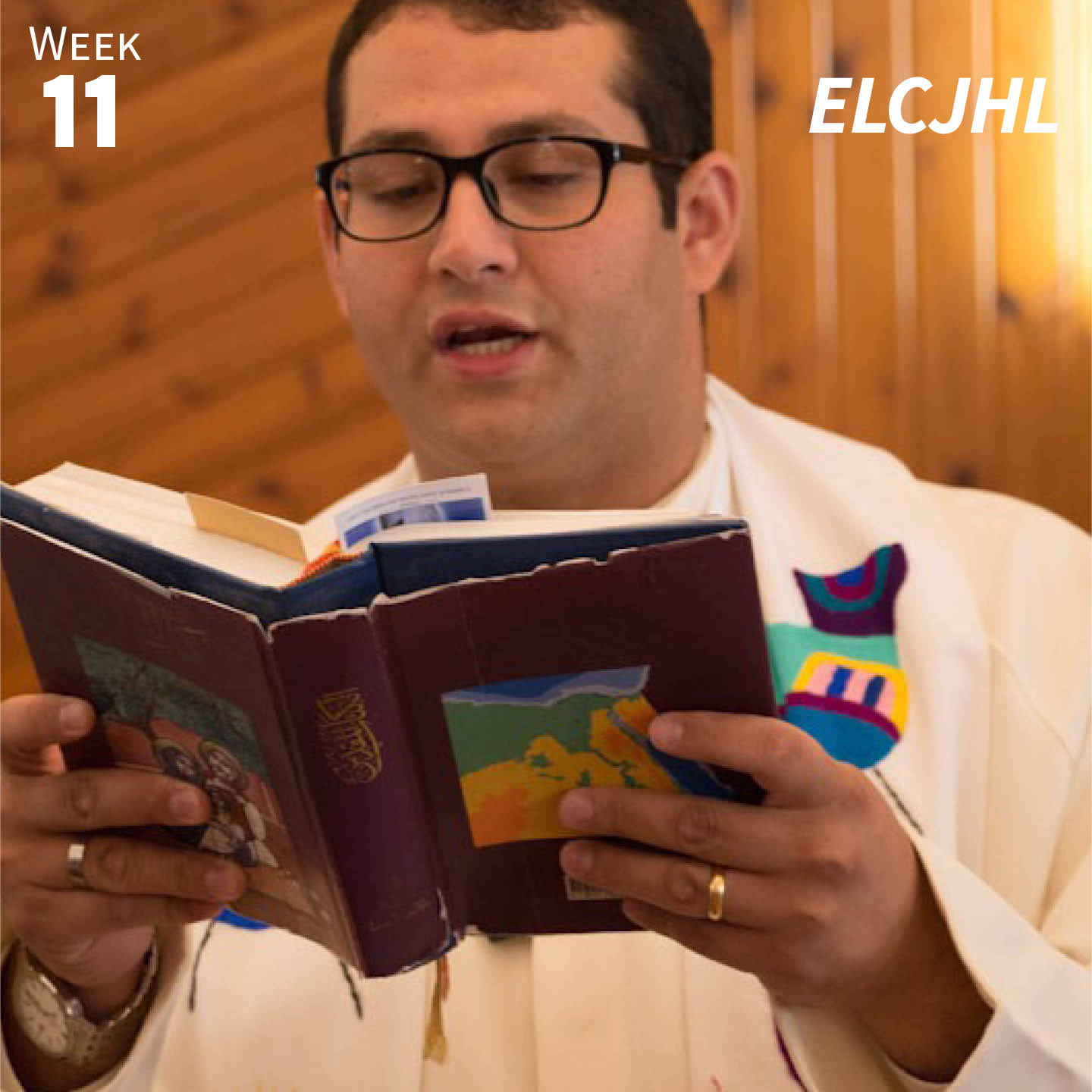 Palestinian Christians are facing increasingly difficult circumstances due to the Israeli occupation. This has led many Palestinian Christians to emigrate, leading to a diminished Christian presence in the Holy Land. The Evangelical Lutheran Church in Jordan and the Holy Land (ELCJHL) is working to preserve this community by offering quality educational opportunities. Here’s what you need to know and what you can do so that together we can rise up.

The ELCJHL is a worshipping community. We have six Arabic-speaking congregations: in Ramallah, Jerusalem, Beit Jala, Bethlehem, Beit Sahour, and Amman, Jordan. We also have a joint ELCJHL/ELCA English-speaking congregation in Jerusalem. Our churches are important spiritual centers for our congregants, who are often struggling to survive in the midst of the long military occupation of Palestine. Sunday morning worship, Bible studies, a lay preacher academy, women’s groups, and youth groups are some of our vital congregational ministries.

ELCJHL believes the keys to solving the problems of Christian emigration from the Holy Land are to:

A central challenge facing Palestinian and other Middle Eastern Christians is emigration. Various pressures are making many Christians depart from their traditional homeland. Recent surveys among Palestinian Christians have pointed to several clear reasons why our community, in particular, migrates out.

The top reason given by those who choose to emigrate is the general lack of freedom and security in the Palestinian territories and the lack of peace on the horizon. This includes issues such as:

We can see from the data that the main reasons for Christian emigration away from Palestine—lack of freedom and deteriorating economic prospects—are tied directly to the experience of the Israeli occupation. This is a long-term and harmful trend for our Lutheran congregation members.

Our church, small as it is, has made a tremendous impact on Palestinian society. Arab and Middle East Christians maintain a crucial balance in the region. We seek to be agents of peace, brokers of justice, ministers of reconciliation, defenders of human rights and gender justice, initiators of dialogue, and apostles of love.

One of the ways we have made such a wide impact is through education.

Our Lutheran schools are located in Ramallah, Bethlehem, Beit Sahour, and Beit Jala. We also operate an Environmental Education Center in Beit Jala. The witness of these schools is the same as the witness of the entire church—we are known for moderation and peace-building. We teach Muslim and Christian students side-by-side. All of our schools are co-educational. All of our schools require peace education as part of the regular curriculum, and many participate in other peace-making and diplomacy opportunities such as the Model United Nations.

Through our schools, we impart the Evangelical Lutheran ethos in the Palestinian context:

Today, our four schools serve 3,000 students. The schools of the ELCJHL are committed to peace education.

Pastor Ashraf Tannous and The Struggles of Christians in Palestine

It’s a Sunday morning service like many others. Filled with scripture reading and hymns accompanied by organ. During How Great Thou Art, those who know it well close their books, singing from memory. After the service people drink coffee and tea in the hall next to the sanctuary.

This congregation, however, isn’t in the United States or Canada. It’s the Evangelical Lutheran Church in Beit Sahour, Palestine.

Some people consider Beit Sahour to be the birthplace of Christianity. The city’s name — depending on the original language — refers either to the shepherds or the wise men in the biblical Christmas story. Two different sites in the city claim to be the fields where the shepherds saw the angels of the Lord. The city of Bethlehem lies just to the West.

Living as a Christian in the Holy Land is a special experience for Rev. Ashraf Tannous, the pastor of the Beit Sahour congregation.

What makes the situation worse for Tannous is the feeling that his Christian family around the world has turned their backs.

Choosing to live in Palestine isn’t easy. His father’s family was driven from their home in Lydda (Lod in Hebrew), in 1948 during what’s known as The War of Independence in Israel, and the Nakba (Catastrophe) for Palestinians. They fled to Jordan where five of Tannous’s aunts and uncles still live, unable to return to their homes.

Travel to Jerusalem, about 30 minutes away, requires a permit which isn’t guaranteed. And even with a permit it means passing through military checkpoints. The former pastor of Tannous’s congregation lives near an Israeli settlement and worries his land will be taken. In nearby Bethlehem, multiple refugee camps are filled with generations of Palestinian families who haven’t been able to return home for nearly 60 years. The unemployment rate in Palestine was over 26 percent in 2014, it was just under 6 percent the same year in Israel.

Tannous has seen the Christians and Muslims in his community leave Palestine fleeing the conflict or leaving because it’s too hard to earn a living and support a family.

It’s a struggle to keep faith alive under occupation, says Tannous. “Most of the time we ask [God] to end occupation, to live a very beautiful life, peaceful life,” he says. “And when we don’t get these prayers fulfilled, when people don’t get it, they feel they are left by God.”

Tannous says the role of the church in this context is to help maintain hope for a peaceful and more just future. “To confirm for our people that our hope, faith and love does not come from the people themselves but it comes from heaven, from Jesus Christ the one who taught us how to hope, how to love and how to appreciate our life here.”

Tannous believes strongly in the role of the church in Palestine, but he doesn’t always feel the Christian community worldwide supports them. Despite Palestine being the land of Jesus, many are surprised to hear there are Christians living there today. “Most of the Christians all over the world, unfortunately, don’t know that there are Christian brothers and sisters in Palestine, fighting for the justice, fighting for freedom,” he says. “People think that Christianity came from Europe or America, and they forget that it comes out from this Holy Land.”

Tannous also believes it’s the role of all Christians to put their faith into action, working for an end to occupation and conflict. He likes a quote from Dietrich Bonhoeffer, “Faith without hope is sick,” but he would take it further, asking Christians to build relationships and advocate for justice. “I mean faith without hope, without love, without bridge building, without working for the others, without cooperating with the others…without working against humiliation and checkpoints and walls is as well sick.”

“When you are a Christian you have to work for love, for peace, for reconciliation,” he says. “Defending the people who are living under occupation.”

Tannous knows that no description he offers can give a true picture of life in Palestine. His words alone aren’t enough for some to take action. That’s why he invites Christians around the world to come and see the struggles of life in the Holy Land. “The moment people come and see and recognize the existence of Christians, and not only Christians, the first Christians,” he says, “this might change lots of things.”

Regardless of what religion or philosophy you hold, call and write your nearby churches and say, “This is the week of prayer as part of the World Council of Churches prayer cycle for Palestine and Israel. Palestinian Christians have made a call for churches around the world to listen to their cry for justice. They implore you to not ignore the injustice they suffer and ask: Can you help us regain our freedom, so that peace, justice, and love can prosper in the Holy Land? Please stand in solidarity with them and make their voice heard.” To learn more about the World Council of Churches prayer cycle visit: https://www.oikoumene.org/en/resources/prayer-cycle.

Attend a service at the church you have asked to speak. If they say Yes to speaking about or praying for Palestine and Israel, name the church and say #SheSaidYes on social media. If the church says No, name the church #SheSaidNo. Include a link to this page of the Kumi Now website along with the hashtags #ChristiansintheHolyLand, #KumiNow, and #Kumi11.

A well-known hymn sung by many Palestinian Christians

(God of peace, rain peace upon us,)

(God of peace, fill our hearts with peace.)

(God of peace, rain peace upon us,)

(God of peace, give our land peace.)