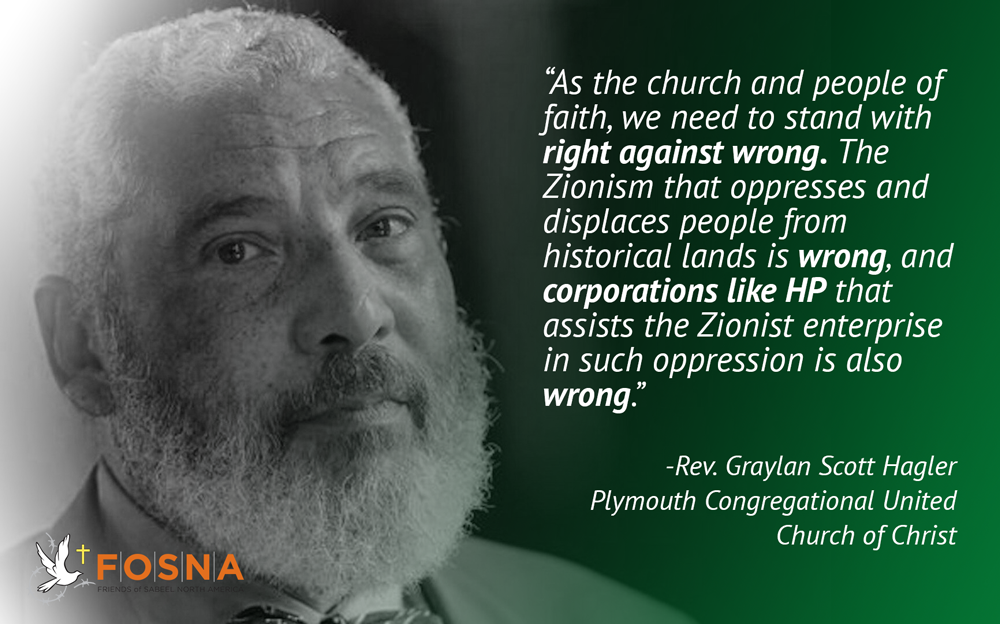 Palestinians in the occupied territories suffer daily, in all facets of their lives, due to the occupation. Unfortunately, the Israeli government is not alone in profiting from the occupation. Several corporations and companies pad their bottom line thanks to the occupation, and Hewlett-Packard is one of the largest. Friends of Sabeel North America (FOSNA) is helping lead the campaign against Hewlett-Packard. Here’s what you need to know and what you and your church or organization can do so that together we can rise up.

Friends of Sabeel North America (FOSNA) is a nonprofit, tax-exempt Christian ecumenical organization seeking justice and peace in Palestine through nonviolent advocacy and education. We support the work of Sabeel Jerusalem, and we organize for Palestine in churches and faith communities across the United States.

Here’s what you can do today to make your church, school, or other organization HP-free:

Take your campaign to social media by publicly tweeting at (or posting on the Facebook wall of) an organization or institution that you are a part of or is popular in your community and tell them why they should not do business with Hewlett-Packard. You can use language like “It’s time for us to boycott companies profiting from human misery.”

Our HP-Free Church campaign is part of a larger international effort to boycott the Hewlett-Packard (HP) companies in accordance with guidelines of the Boycott, Divestment, and Sanctions (BDS) movement. The BDS movement calls for the boycott of and divestment from companies that profit from Israel’s illegal occupation of Palestine. It is based on tried-and-true methods used by activists from South Africa to the United States in pursuit of civil rights. The demands of the BDS movement are rights-based and call for Israel to be held accountable in accordance with international law. The demands are the end of the illegal occupation and complete dismantling of Israel’s apartheid wall, the implementation of the Right of Return (U.N. Resolution 194) for all Palestinian refugees, and equal rights for all Palestinian citizens of the state of Israel.

HP is directly involved in sustaining Israel’s occupation of Palestine. In 2015, Hewlett Packard Co. split into two corporations: HP Inc. (consumer goods) and Hewlett Packard Enterprise (corporate services). Both have contracts with the state of Israel and Israeli military, and both benefit from the HP brand name.

HP Enterprise provides servers to the state of Israel for its population registry. IDs issued based on this registry determine one’s level of rights. Under this system a hierarchy exists where Jewish citizens of Israel have more rights than Palestinian Israeli citizens, who have more rights than Palestinians from the West Bank, Gaza, or East Jerusalem.

HP Inc. is the exclusive provider of computers to the Israeli military, which carries out the occupation of the West Bank, including East Jerusalem and the Gaza Strip, and in the last decade has carried out the brutal siege of Gaza.

HP Enterprise provides servers and technology used in Israeli prisons. Israel’s prison system is used to suppress Palestinian political activity, and to stifle opposition to its policies. By helping Israel run its prisons, HP is at the heart of Israel’s use of mass incarceration to undermine Palestinian opposition to apartheid.

Recently, the global campaign targeting HP has seen significant positive progress. HP corporations have dropped several significant contracts, but we need your help to increase the pressure until they are no longer complicit and commit to not engage in such activities in the future.

The campaign to boycott HP is a growing global movement by activists around the world. To date, more than 1.8 million people have signed a petition calling on HP to end its role in Israeli apartheid. And in 2014, 1,000 activists marched on an HP conference. Dozens of student governments have called on their universities to divest from HP. In the United States the Presbyterian Church, Unitarian Universalists, United Church of Christ, Quaker Friends Fiduciary, Alliance of Baptists, and Mennonite Church USA have all divested from Hewlett-Packard. To bring these denominational decisions to the local level, we launched the HP-Free Church campaign in December 2016. Over 20 churches across the United States have pledged not to buy HP computers, printers, ink, and other products until the tech company ends its involvement in the occupation for good and institutes policies that guarantee it will not engage in such activities in the future. We encourage you to help us add to this list and spread the campaign internationally!

“Our work on the HP-Free church campaign has sharpened our skills for action on all kinds of issues locally. Because we’re acting together for justice in Palestine and peace in the Holy Land, we’re learning how to act bravely for immigrants in our community. We’re learning how to act courageously for civil rights among transgender kids and gay couples. Because we took the step of becoming an HP-Free church and live with the criticism, we’re stepping out in faith and action all over our city and state. It’s unleashed a great spirit of care and determination in us. We can’t continue to preach solidarity and act as if it’s optional in the church. We can’t continue to denounce occupation and participate in it—with our investments and our choices and our spending habits. We are an HP-Free church because our Palestinian friends, beleaguered and organized, have asked us to act in faith. We are an HP-Free church because solidarity requires action.

Over the years, I’ve heard so many dear Palestinian leaders—young and old, Christian and Muslim—cry out for freedom and insist on action in the West. They’ve paid such an enormous price for their pain and courage. What am I to do? Nothing? If I do nothing, if the church does not act, we are complicit in injustice, in occupation, in human misery. Jesus urges us to stand on the other side of history. Moses doesn’t suggest that Pharaoh let the Hebrews go. He insists on it. Jesus doesn’t suggest that we free the imprisoned and liberate the oppressed. He insists on it.

I’ve been criticized mightily in our community. Some have even suggested that I’ve encouraged anti-Semitism through my support for the BDS movement. But I’m not buying it. I stand with a growing coalition of Israelis and Palestinians, a growing coalition of Jews and Christians and Muslims. We do this work together. We boycott HP as an act of moral courage and defiance: a protest against occupation, bigotry and destruction. It’s time for the church to act like the defiant, loving, creative church of Jesus Christ. It’s time for us to boycott companies profiting from human misery, and the occupation of the poor, and the destruction of native communities. For us, the HP-Free movement is a step in that direction.”

HP means something different for Palestinians living under occupation. Use #HP and play with the letters ‘H’ and ‘P’ to send a creative message, illustrating one of HP’s many possible meanings. For example, #HP – How Pathetic, Help Palestine, Hear Please the cry of Palestinians, How have People wronged the Palestinians, or How is Peace possible with companies profiting from the occupation.  Use one of these messages or get creative and make your own meaning for HP!

Include a link to this page of the Kumi Now website along with the hashtags #HPFree, #KumiNow and #Kumi15.

“These are among the hardest words I have ever written. But they are vitally important. Not only is Israel harming Palestinians, but it is harming itself. The 1,200 rabbis may not like what I have to say, but it is long past time for them to remove the blinders from their eyes and grapple with the reality that Israel becoming an apartheid state or like South Africa in its denial of equal rights is not a future danger, as three former Israeli prime ministers — Ehud Barak, Ehud Olmert and David Ben Gurion — have warned, but a present-day reality. This harsh reality endured by millions of Palestinians requires people and organizations of conscience to divest from those companies — in this instance, from Caterpillar, Motorola Solutions and Hewlett Packard — profiting from the occupation and subjugation of Palestinians.

The Noble Peace Prize recipient, the Most Reverend Desmond Tutu, is a South African Anglican cleric and theologian known for his work as an anti-apartheid and human rights activist. From “Justice requires action to stop subjugation of Palestinians” published in the Tampa Bay Times: http://www.tampabay.com/opinion/columns/justice-requires-action-to-stop-subjugation-of-palestinians/1227722

More info on the HP international campaign and the BDS movement: https://bdsmovement.net/boycott-hp