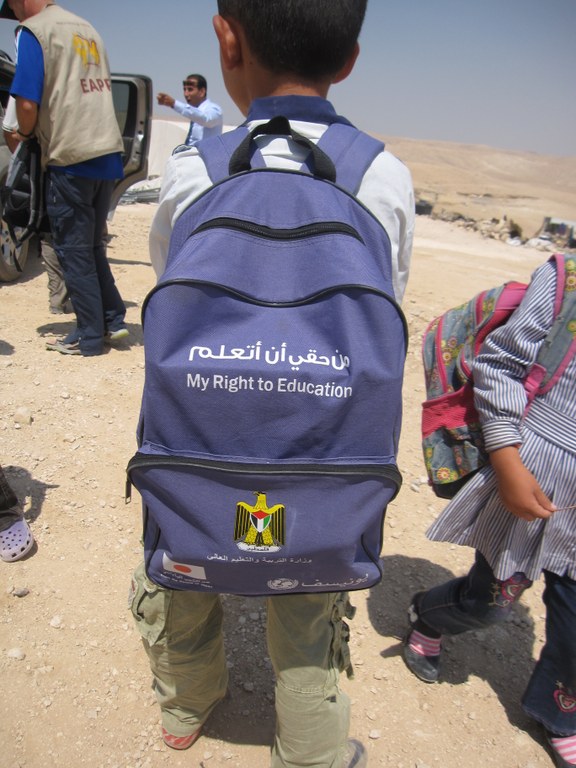 Among the constant injustices, big and small, perpetrated on the Palestinians, those that affect children are the most difficult to bear. MA’AN Development Center is fighting for the rights of Palestinian children. Here’s what you need to know about issues facing children in the occupied Palestinian territory and what you can do so that together we can rise up.

MA’AN Development Center is an independent Palestinian development and training institution established in January, 1989, registered as a non-profit organization. The main office is located in the West Bank city of Ramallah and it has four branch offices located in Gaza, Khan Younis, Tulkarem, and Jenin. MA’AN’s work is informed by the necessity of creating independent, self-reliant initiatives that lead to the development of human resources for sustainable development, which incorporate values of self-sufficiency and self-empowerment.

Within conflict situations, children often bear the brunt of the tension; whether in the form of direct engagement in warring such as in the case of child soldiers, being caught in the ‘crossfire’ as particularly vulnerable members of society, or with regard to their heightened experience of the poverty that can be inflamed by such conflicts1. Due to these realities, their fundamental rights as children are often violated. Most notably, these rights are set down in the UN Convention on the Rights of the Child (CRC)2 that entered into force in 1990, and which reflected a shift in the way that children were perceived around the world.

Israel ratified the CRC in 1991 without reservation; yet today’s reality of child arrests, exploitation, torture, and on-going denial of the right to play and of access to education (among other violations) for Palestinian children in the State of Palestine reflects Israel’s flagrant disregard for its important obligations under international law. Indeed, the common treatment of Palestinian children by Israeli Occupation Forces (IOF) has been condemned both domestically and upon the international stage as comprising clear violations of the CRC3.

The right to access quality education constitutes one of the most fundamental human rights. It concerns the progressive development of the individual, both as a person, and as a responsible citizen. It is one of the main factors enabling an individual or family to develop their quality of life, and is central to the progressive economic, social and cultural development and growth of society.

The protracted conflict and the decades-long occupation have jeopardized the access to education in the occupied Palestinian territory and the attacks on education by Israeli military forces and Israeli settlers in Palestine constitute grave violations of children’s rights to education and development. In the West Bank, access to education is undermined due to the detention of children, military operations and Jewish-Israeli settler-related incidents; the shortage of physical infrastructure due to building restrictions in Area C and East Jerusalem; and movement restrictions such as the checkpoints and the separation wall. In the Gaza Strip, armed conflict and the ensuing damage and destruction of facilities, the Israeli Blockade, and the internal Palestinian divide have severely disrupted services, including the ability to conduct regular educational activities. Combined with their negative psychosocial effects, these factors have affected student wellbeing, performance and completion rates.

These attacks are particularly prevalent in the most vulnerable areas of the West Bank – Area C, H2 (The closed off military zone in the Palestinian city of Hebron) and Jerusalem, all of which are atomized by Jewish settlements that aim to gain complete and sovereign control over the occupied territories. The perpetrators act with impunity and the attacks are persistent enough to create a constant atmosphere of fear and terror for children and their teachers, generating great psychological distress, anxiety, helplessness, and ultimately severely diminishing levels of educational attainment. The need to create safe and protective environments for education is critically urgent, as is the enforcement of a strong accountability mechanism to hold Israel responsible for its actions.

Schools in the West Bank occupied Palestinian territory, Area C, the H2 area of Hebron city and Jerusalem remain the regions most at risk of attacks. Area C and H2 comprise over 60 percent of the West Bank and are under Israeli’s direct civil and military control. Palestinian civil jurisdiction is limited to less than 40 percent of the West Bank (Areas A and B). The movement and access restrictions imposed by Israel throughout the West Bank since 2000, the construction of the Separation Wall begun in 2002, the expansion of Jewish settlements in Area C4, and Israel’s lack of respect for international laws and conventions5, have grave implications for Palestinian children’s safe and continued access to education.

Obtaining permits for school construction in Area C is severely hampered by the discriminatory planning regime applied by the Israeli authorities6. Structures including schools built without permits are vulnerable to demolition7. For example, in 2013 the Ecumenical Accompaniment Programme in Palestine and Israel (EAPPI) reported that over 39 schools had received demolition orders or written stop work orders. In total these 39 schools serve around 4,305 students8. In 2012, movement between towns and villages in the West Bank were controlled by a series of roughly 500 Israeli checkpoints, gates, earth mounds and trenches dramatically increasing the time needed to travel to and from schools and fuelling the uncertainty of arrival. These checkpoints affect roughly 2,500 children from a multitude of communities9. By 2005, the Separation Wall had already impacted both the quality of, and access to education through shortened teaching hours and growing dropout rates. In August, 2015, John Dugard, United Nations Human Rights Special Rapporteur for the Palestinian territories, explained that “The quality of education has deteriorated because schools have been obliged to shorten teaching hours as a result of wall gate-opening times. Furthermore, children are being forced to drop out of school either to help supplement diminishing family income or because their parents can no longer afford to send them to school”.

Incidents of attacks documented over the last three years include harassment, verbal abuse, physical violence, shooting of rubber bullets, gas and sound bombs, live ammunition, and arbitrary detentions by the Israeli Occupation Forces (IOF) of students and teachers at military checkpoints and along the access roads to and from school, and from inside the school itself10. All students and teachers interviewed for this report said that harassment and abuse were a daily occurrence on their way to and from school. A student from the Tarek Bin Zayad School in the vulnerable H2 area of Hebron explained that, “When we [the students] walk [along] the street, we always look behind us as we are expecting an attack.” Another student from the Qurtoba School in H2 describes her experience in this way: “When we go home from school, the settlers come with sticks and hit us on the legs. One time, settlers came from behind the school. I couldn’t run away as my legs were paralyzed with fear. Ten settlers surrounded me, beat me and spit on me. They came into the school over the roof, took our flag down and destroyed all our security cameras.”

According to Monitoring and Reporting Mechanism data11, a total of 42,151 students have been affected by these attacks between the years of 2012 – 2015. In the past three years, attacks against schools in the West Bank have risen dramatically. From 97 reported attacks in 2012 to 273 in 2014. This constitutes a 300 percent increase (based on MRM data). The IOF (Israeli Occupying Forces) remains the primary perpetrator of abuses, accounting for 85 percent of violations of humanitarian access and 94 percent of attacks against schools since 2012 (MRM data). 2 Office of the High Commissioner for Human Rights. (1990). ‘UN Convention on the Rights of the Child’. See Annex 1.

4 UNCTAD, Report on UNCTAD assistance to the Palestinian people: Developments in the economy of the Occupied Palestinian Territory, July 2015, p.4

5 Report of the Special Rapporteur on the situation of human rights in the Palestinian territories occupied since 1967, Richard Falk, January 2014, p.3, para 3.

7 UNOCHA ,Humanitarian Factsheet on Area C of the West Bank July 2011.Most of Area C has been designated as military zones and for expansion of Israeli settlements, severely constraining the living space and development opportunities of Palestinian communities. While it is virtually impossible for a Palestinian to obtain a permit for construction, Israeli settlements receive preferential treatment in terms of allocation of water and land, approval of development plans, and law enforcement. See also interviews with teachers at Qurtoba School, Hebron, by Brendan O’Malley in May 2012.

8 See EAPPI Factsheet 2013 No. 3, Access to Education: Creating a safe environment despite occupation.

10 See MRM Report on the oPt

“He asked for my Facebook password,” said Ahmad H., 17, recalling his first interrogation at Ofer military prison on August 1. “I gave it to him. He logged in and said it had inciting photos.”

“I told [the interrogator] of my arrest earlier in April 2016 for 10 days, when I was interrogated [at Shikma prison] in Ashkelon about my Facebook account. I told him I deleted everything upon my release and the account is clean. I told him to check it.”

Ahmad told Defense for Children International – Palestine, that his interrogator at that point accused him of “obstructing the interrogation, claiming that I had asked someone to delete the photos, but I denied it.”

The interrogation lasted one hour, during which he had no parent present or access to legal counsel.

On August 7, Ahmad was interrogated again, this time for three hours.

“[The interrogator] kept questioning me about posting inciting pictures on my Facebook account. I told him I had not posted anything after my release and I had not asked anyone to delete the ones I had posted.”

“Israeli authorities must immediately stop using administrative detention against Palestinian minors,” said Brad Parker, attorney and international advocacy officer at DCIP. “Inability to file charges against children due to lack of evidence should never be grounds for holding them indefinitely without charge or trial.”

Share our recipe for hummus found below and have a potluck with friends or community members! Talk about education in Palestine, discussing information from this page of the Kumi project or watching some of the short videos listed under ‘Additional Resources’. The goal of this action is to educate yourself and those in your community about Palestine.

Take a photo of your potluck and share it on social media. Also share one of the short videos listed under ‘Additional Resources’. Include a link to this page of the Kumi Now website along with the hashtags #RightsofChildren, #KumiNow, and #Kumi24.

Top the hummus and enjoy: Spread your Hummus onto a plate and top with whatever you’d like. Traditionally, hummus is topped with olive oil and a few whole chickpeas. However, you can also add some smoked paprika, cumin, za’atar, parsley leaves, tahini sauce, pine seeds and/or fresh herbs! Anything goes here — it is your hummus, after all.

Shine on me so I can see you,

Let me have a little light.

I beg the sky that’s covered with Jerusalem

with Mt. Carmel, child of the mountains,

to preserve all the little boys born

into catastrophe hoping for life

There they go, down the icy roads

as they seize the grass, and water and the forced belonging.

On a lovely rock in Galilee

the lad who tried so hard to come to you,

rising to welcome you

dedicating all candles to your eyes—

For whom does earth remove its human robes?

is bound by bleeding bodies

Our brothers, our foes

pierce us with bullets

Why do the eyes of madness turn away?

For whom does the night bird cry?

From “Days in the Life of a Palestinian Boy” by Waleed al-Halees, a contemporary Palestinian poet from Gaza. The piece was translated by Lena Jayyusi and Naomi Shihab Nye in Anthology of Modern Palestinian Literature and edited by Salma Khadra Jayyusi.

Addameer, “The Right of Child Prisoners to Education”: http://www.addameer.org/sites/default/files/publications/addameer-report-the-right-of-child-prisoners-to-education-october-2010-en.pdf

Addameer, “In the Shadow of the 2014 Gaza War: Imprisonment of Jerusalem’s Children”: http://www.addameer.org/sites/default/files/publications/imprisonment_of_jerusalems_children_2016.pdf