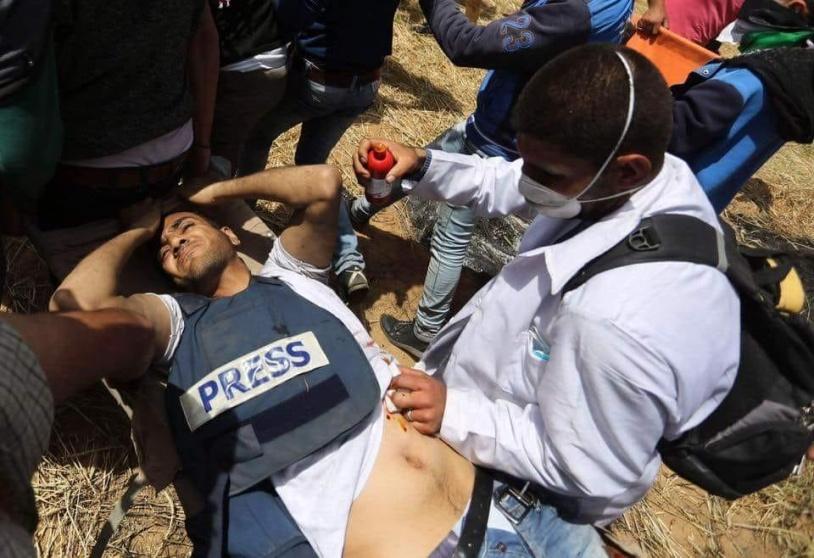 Palestinian journalists face regular threats of censorship and violence. Frustratingly, this censorship has been aided and abetted by tech giants such as Facebook, Twitter and Facebook. The Palestinian Center for Development and Freedoms (MADA) is fighting for freedom of speech and a free and independent press in Palestine. Here’s what you need to know and what you can do so that together we can rise up.

The Palestinian Center for Development and Freedoms (MADA) was established in 2006, where a group of passionate vision-driven Palestinians “citizens and journalists” joined forces to promote and defend the right to freedom of expression and opinion. For the first two years MADA was run solely by volunteers and activists who believed it was time to make a difference, and aimed to support the journalists who face daily numerous oppressive constraints while exercising their professional duty.MADA is an independent, non-governmental, and non-profit organization, The center operates throughout the Palestinian territories based in Ramallah, working daily to develop the Palestinian media and to promote and defend media freedoms and freedom of expression.

MADA stands side-by-side with Palestinian journalists, monitoring and disseminating all violations on their rights, empowering them to speak up and end their self-censorship, offering them free legal consultation and representation, promoting and defending their right to freedom of expression and opinion and right to access information, and contributing to the development of Palestinian media in order to develop and promote democracy in Palestinian society.MADA’s organizational development is a continual strategic process that responds to research and studies that identify the gaps and challenges in media service provision and protection. In short, MADA’s vision is a free and professional media in Palestine.

MADA encourages you to join in their vision by putting pressure on the Israeli government to A) stop the policy of targeting the Palestinian press and journalists and to B) cancel the Israeli Facebook law, through which Israel could close Palestinian, and any dissenting, pages and accounts.

The first half of 2018 witnessed a significant increase in the number of violations against media freedoms in Palestine.

In the first half of 2018, there were a total of 208 Israeli attacks against media freedoms in Palestine, an increase of 64% compared to the same period in 2017, when there were 127 attacks.

The seriousness of these physical attacks is not only in their number, but also the forms of attacks: a total of 62 journalists were hit by live bullets, rubber bullets, and gas bombs fired directly at their bodies. A number of these journalists were wounded by explosive fire, which killed two of them.

Indifferent to the rights conferred to the media and journalists by international laws, including the rights of protection and immunity, which enable them to freely work, the Israeli occupation forces have made journalists targets of its soldiers and snipers. They have done so in order to cover the crimes committed by the Israeli Army against the peaceful Palestinian demonstrators taking part in these marches and to prevent Palestinian voices from being heard at the global level.

The murders of Yasser Murtaja and Ahmed Abu Hussein are added to another 41 murders of journalists in the West Bank and Gaza Strip committed by Israeli occupation forces since 2000. 17 journalists were murdered in the attacks on Gaza in 2014 alone. In addition, dozens of journalists, both men and women, were injured during those attacks, leaving many with permanent disabilities.

On May 14th, 2018, the freelance photographer Yasmin Akram Al-Na’ouq (24 years old), was shot with a bullet in her back and hit with a gas bomb while she was covering the return march events, to the east of Jabalia/Gaza Strip.

Based on the investigations of MADA field researcher, Al-Na’ouq was wearing her press uniform, and had approached to within roughly 200 meters of the border fence to cover the events of the return march. But as she continued to approach, she was unaware that she was about 50 meters away, while shooting dozens of demonstrators in that area. In the meantime, the soldiers stationed near the border fence fired a brutal barrage of live bullets. One of the bullets hit her in the back while she was shooting video with a tablet. The tablet fell from her hand and broke. She had hardly asked for help when a small drone fired about 30 gas bombs, two of which hit her in the back: one directly in the back and the other towards her side.

Al-Na’ouq reported that she lost consciousness and did not wake up until she reached the field medical point in the eastern part of Jabalia and heard the doctor saying that she needed to be taken to Al-Awda Hospital. She soon lost consciousness and did not regain it until late at night in Al-Awda Hospital, where she found herself on the bed with her family surrounding her.

Al-Na’ouq was discharged from the hospital at 3:30 PM on the following day, May 15th, under the doctor’s warning to avoid movement for fear that the injury in her back may be aggravated. The doctor also asked her to take a CT Scan for fear that there might be laceration in the bones. However it took until June 7th to get the scan given the overcrowding at Al-Shifa Hospital, overwhelmed as it was with those wounded in the peaceful return marches.

Yasmin Al-Na’ouq stated that she is still suffering from difficulties breathing and headaches due to gas inhalation, exhaustion, and back pain.

When dissent and the truth are repressed, the best response is to shout your dissent louder and share the truth widely. Facebook, Twitter, and YouTube have cooperated in allowing the Israeli government to monitor and censor online Palestinian content. This censorship has limited the ability of human rights activists and organizations to speak openly and legally under international law. And, of course, there is no similar agreement allowing Palestine to monitor and censor Israeli individuals and organizations.

As such, pledge to share at least one piece of well-written, eye-opening Palestinian reporting, or one of the articles/reports listed below, each day this week. If you are unsure as to which news organizations routinely produce legitimate journalism from Palestinian journalists, you can start with:

When you share these articles across your social networks include a link to this page of the Kumi Now website along with the hashtags #KumiNow and #Kumi28.

The barring of Christians in Gaza from celebrating Easter in Jerusalem. (+972)

The shooting a blindfolded and bound Palestinian 15-year-old boy. (Mondoweiss)

The shutting down of a boys football tournament in Jerusalem (Maan)

A trinity of oppression (Palestine Square)

Article 19 of the Universal Declaration of Human Rights

MADA is committed to the principles of the United Nations on human rights, especially the right to freedom of opinion and expression:

“Everyone has the right to freedom of opinion and expression; this right includes freedom to hold opinions without interference and to seek, receive and impart information and ideas through any media and regardless of frontiers.”