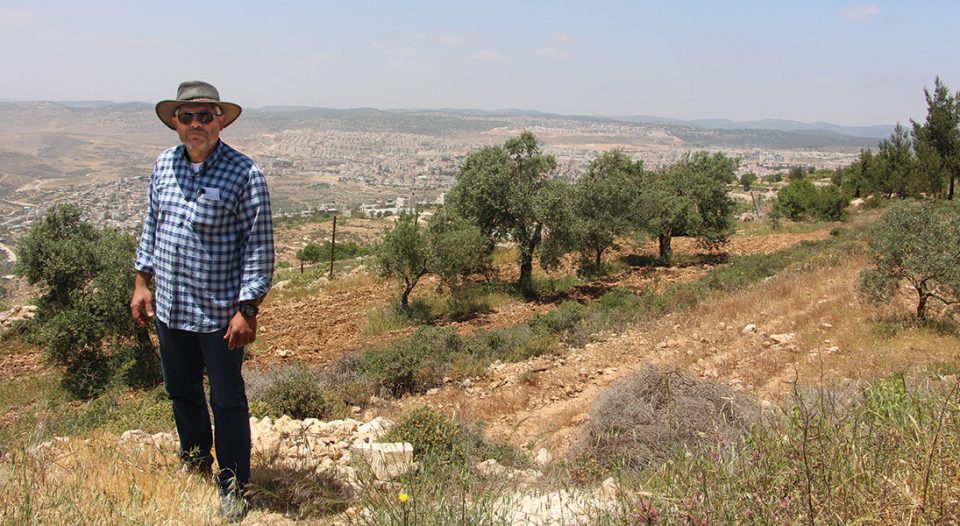 Tent of Nations
Building Permit Discrimination in the West Bank

Palestinians in the West Bank have been systematically denied their rights to improve and build upon their land while, simultaneously, they see their lands encroached upon by settlements and the border wall. Tent of Nations is both an example of how these unjust policies work and how Palestinians and their allies can work to fight these injustices. Here’s what you need to know and what you can do so that together we can rise up.

Tent of Nations is an educational and environmental family farm. Their mission is to build bridges between people, and between people and the land. They bring different cultures together to develop understanding and promote respect for each other and our shared environment.

To realise this mission, they run educational projects at an organic farm located in the hills 9 kilometers southwest of Bethlehem, Palestine. The farm is a center where people from many different countries come together to learn, to share, and to build bridges of understanding and hope.

Tent of Nations offers workcamps and volunteer opportunities, runs children’s summer camps and a women’s empowerment project, and welcomes groups and visitors of all shapes and sizes.

The organic farm on which the Tent of Nations project runs is known as ‘Daher’s Vineyard’. This land, which stretches 100 acres, is owned by the Nassar family. The family has been fighting a legal battle to keep hold of the land since it was classified as ‘Israeli State Land’ and thus threatened with confiscation in 1991. The struggle is ongoing. However, with a commitment to peaceful resistance and through the solidarity of those who have visited the land, much has been achieved. Tent of Nations continues to work to protect and develop the farm as a place where people can meet, learn, work together, and inspire one another.

Read more about the History of Daher’s Vineyard at http://www.tentofnations.org/about/dahers-vineyard-land-history/

In their latest World Report, Human Rights Watch argues that, “Building permits are difficult, if not impossible, for Palestinians to obtain in East Jerusalem or in the 60 percent of the West Bank under exclusive Israeli control (Area C).” As a result, Palestinians have had to build housing and businesses that are under constant threat of demolition or confiscation. And Palestinians living in these areas have significantly less access to water, electricity, schools, and other state services than Jewish settlers living a few kilometers away1.

Furthermore, this effort to unite settlement area, and thereby cut Palestinian areas off from one another, makes an independent Palestinian nation less and less viable. Nor is it just Palestinian residents of Area C that are harmed by these policies: hundreds of communities in Areas A and B have their land reserves in Area C and are therefore cut off from and denied the ability to develop their land2.

Israel uses a variety of tactics to limit Palestinian development: It has removed 70% of Area C from possible development by designating “large swaths of land as state land, survey land, firing zones, nature reserves and national parks; by allocating land to settlements and their regional councils; or by introducing prohibitions to the area now trapped between the Separation Barrier and the Green Line (the boundary between Israel’s sovereign territory and the West Bank)3.”

The remaining 30% of Area C is kept stagnant through a combination of neglect and discriminatory policies. Building permits are rarely approved, and applications are often simply ignored. As of late 2015, the Civil Administration (CA) “had prepared and approved plans for just 16 of the 180 Palestinian communities” in Area C. These plans cover less than 1% of area C. And according to the CA’s own figures, between 2010 and 2014 only 33 of 2,020 building permits applied for by Palestinians were approved – a meager 1.5%.

The statistics are alarming, but it is in the specific examples where the impact is truly seen:

For example, in the Palestinian village of Jub a-Dib, southeast of Bethlehem, Israel has failed to prepare or approve a development plan for the village. The village has never been connected to the power grid, and in 2016, with the help of a nonprofit, it installed 96 solar panels. “For the first time, the residents were able to enjoy a constant supply of electricity.” A few months later, Israeli forces arrived and confiscated the solar panels.

Then there is the demolition of Khirbet Tana4.

And currently, the village and school at Khan al-Ahmar are under threat of demolition so as to fuel the expansion of nearby Jewish settlements5.

Shaiya Rothberg, chairperson of Haqel – Jews and Arabs in Defense of Human Rights, rightly points out the double standard of Israel when it comes to development in the West Bank:

“Israel’s line of defense is that the Jews on the West Bank are Israeli citizens, and so they have their rights, while the Palestinians are not Israeli citizens but occupied foreigners. But that is not a reasonable defense: When it comes to Jews, we act as if we are the legitimate sovereign on the West Bank. And so we swallow up land and resources in Jewish settlements. But when it comes to Palestinians in the very same territory, we are suddenly no more than a foreign power engaging in a temporary military occupation, and so the residents are denied equality before the law. This double standard has resulted in a discriminatory regime that stands in contradiction to the principles of human dignity that lie at the foundation of any form of legitimate government6.”

The reality is that all residents of the West Bank, be they Christians, Muslims, or Jews, are human beings and neighbors in the land of Palestine. The laws of the land must apply, fairly and equitably, to all. All are entitled to water, to power, to education, and other services. And all are entitled to the rights of land ownership and improving their land.

Daoud Nassar, farmer and co-owner of Tent of Nations

When we plant an olive tree we believe in the future. Because the first olives might come after ten years. When you plant a tree you believe that this tree is going to bear fruit: maybe not tomorrow, but in ten, fifteen years. And this is the hope we have to live on.

We had a lot of attacks from the Israeli settlers who came here threatening us with guns, and the last time they came, in 2002, with big machines. They started cutting the ground to build a road, but we managed to stop them legally after three days. But the settlers were very angry and they cut 250 olive trees from our property. In 2014, we had a big destruction of our fruit trees, which we had planted 18 years ago. Military bulldozers came early in the morning on the 19th of May and uprooted and destroyed hundreds of fruit trees, just 10 days before the apricot harvest.

It’s very difficult to hear from a settler who’s coming and saying “God promised me this land!” And when you argue with him about how you bought the land and you have the papers, the documents, from 1916. He said to me once “you have papers from here, but we have papers from God.” It’s very sad to see people misusing their religion for political purposes. It’s not about Jews; there are Christians also and Muslims too.

That’s why we always say religion must bring people together and not separate people from each other.

So even under physical pressure we are still here. Now they are trying to isolate us. The road has been blocked since 2001. We got demolition orders here two years ago. We cannot build, we cannot have access to running water. No electricity. And of course there’s no development.

So even under physical pressure we didn’t give up. The Tent of Nations is located on the hilltop, surrounded by Israeli settlements. The main access to the property has been blocked since 2001. We got many demolition orders, including for tents. We cannot build, we cannot have access to running water. No electricity. And of course there’s no development.

When people are pushed to the edge, provoked by violence, have no hope for a better future, a situation like that will force them to react violently, to resign, or to give up and leave. We said to ourselves, with violence, people will create more violence. With resigning, this would put us in the victim mentality and it is dangerous to become a victim. With running and leaving, we will feel defeated by our own challenges.

So we said, none of the 3 options is good: there must be another way of resistance and without violence. But since it is a long way to go, and before we developed what we call it the fourth way, we said four important things that became our principles: we refuse to be victims, we refuse to hate, we are acting differently based on our Christian faith, and we believe in justice. So we created a fourth way of action, which is the Jesus way. To overcome evil with good, hatred with love, and darkness with light under the slogan ‘We refuse to be enemies.’ Which is a nonviolent, creative, and constructive way of resistance. It is easy to say that, but it’s very difficult to live and practice it.

We believe that in every human being, including what people might call an enemy, there is something bad and something good, although sometimes this good is buried deep down. We have to open people’s eyes, to see and to learn about the truth, and this truth will set us free. When we act in a different way we force the ‘other’ to see us as human beings. This is the Christian witness in this part of the world.

We have a long way for justice, but we have to go following a vision and not focusing on the difficulties we are facing knowing that the suffering will never ever be the end of the story, but it can be seen as a path to achieve the goals and vision.

We will walk with small steps like the farmer using the horse to plow. He’s not allowed to look backwards, because the moment he looks backwards the line won’t be straight. So he has to focus on his vision, but go slowly, slowly. This is what we are learning to do here.

Transcribed and adapted from the film “We Refuse to Be Enemies” from RELEVANT and revised by Daoud Nassar. Available at https://youtu.be/rPVARk1V_hA.

The best way to support the work of Tent of Nations is to visit the farm yourself or encourage friends, school groups, and church groups to include it on their itinerary when they visit the Holy Land for vacation or pilgrimage.

From afar, you can participate in Tent of Nations’ Sponsor a Tree program: http://www.tentofnations.org/support/sponsor-a-tree/

Tent of Nations will send you a certificate for your tree, but you won’t receive it in time to share online this week. Instead, get creative and think to the future as Daoud suggests when he says, “When you plant a tree you believe that this tree is going to bear fruit: maybe not tomorrow, but in ten, fifteen years.” Draw a picture of your tree finally bearing fruit and share it on social media, along with a message such as, “I sponsored a tree at Tent of Nations to support their fourth way of action.” Include the link above along with a link to this page of the Kumi Now website and the hashtags #KumiNow and #Kumi50.

“Unfold Your Own Myth” by Rumi

But don’t be satisfied with stories,
How things have gone with others.
Unfold your own myth,
Without complicated explanation,
So everyone will understand the passage,
We have opened you.

“Israel confiscates solar panels supplying all power for Palestinian village it has not connected to grid for 50 years” from B’Tselem: https://www.btselem.org/index.php/video/20170718_confiscation_of_solar_panels_in_jub_a_dib#full