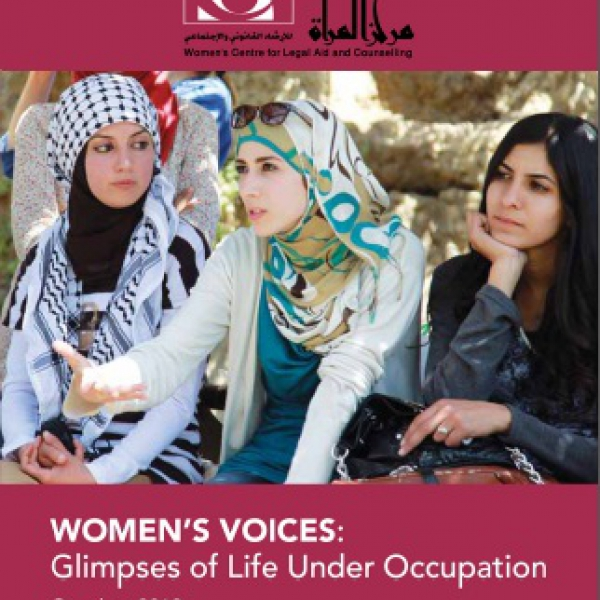 Night raids on Palestinians in the occupied territory are the main tool of violence towards Palestinian women. The Women’s Center for Legal Aid and Counselling (WCLAC) works to document and oppose this violence. Here’s what you need to know about violence against Palestinian women and what you can do so that together we can rise up.

The Women’s Center for Legal Aid and Counselling (WCLAC) is a non-profit, Palestinian grassroots organisation seeking to achieve gender equality and women’s rights based on the principles of democracy, social justice, and respect.

WCLAC employs many methods to realise and address the causes and consequences of gender based violence in Palestinian society, stemming from the internal factors of traditional, patriarchal society, to the external of Israeli occupation. For the last 26 years, they have conducted research, opened dialogue, and brought issues affecting Palestinian women into the public political consciousness.

WCLAC’s work is inclusive of Palestinian women in the West Bank, Gaza, and East Jerusalem, each area facing its own obstacles in obtaining access to their rights and autonomy.

WCLAC encourages anyone who is passionate about supporting women’s rights in Palestine to write to their local political parties/ parliamentarians /local councils on the following:

You can find the Women’s Center for Legal Aid and Counselling on their website at http://www.wclac.org/english/. Or find it on Facebook at https://www.facebook.com/Womens-Centre-for-Legal-Aid-and-Counselling-WCLAC-256930734377028/ or Twitter at https://twitter.com/WCLAC_English.

Gender-based violence remains a threat to Palestinian women. One of its most prominent forms within the occupied Palestinian territory and East Jerusalem is night raids. Based on current figures, WCLAC estimates that approximately 1360 night raids occur every year, commonly resulting in arrests, even of children. Settlement construction has been directly linked to the increase in night raids and arrest cases and a surge in settler violence.

WCLAC’s motive is the documentation of testimonies from Palestinian women who are survivors of occupational violence and attacks. Women field workers are employed by WCLAC to collect these testimonies by collecting interviews in the affected areas. This is to obtain a first-hand account of the effects of night raids and arrests on Palestinian women. Direct accounts are a vital step in identifying offences so that we can take an evidence-based, legal approach in reporting the issue.

WCLAC has penned official submissions to the United Nations (U.N.) special rapporteurs on offences directly affecting women in Palestine. In June 2016, a report on Israeli night raids on Palestinian residencies highlighted the effects of night raids on women through 50 testimonies collected during the reporting period. The report noted that there was a direct correlation to night raids and the proximity of the location to Israeli settlements (illegal under international law) and checkpoints. The safety of settlers illegally occupying land in the Palestinian territory has forced Israeli military to act as a protector for them, increasing tensions, and leading to the implementation of fear tactics such as night raids and unlawful arrests. The psychological harm inflicted on women by these tactics is made blazingly apparent from the testimonies collected.

In May 2017, WCLAC was invited to submit a report to the Special Rapporteur on human rights in the Palestinian territories on issues affecting Palestinian women in Jerusalem. During the reporting period 30 testimonies were collected; almost half of all testimonies involved night raids. WCLAC reported that the emotional and mental effect of night raids on women and their families was severe and sustained. Tensions are high between settlers in East Jerusalem (Palestinian territory), who comprise roughly 40 percent of the East Jerusalem population of 540,000, and Palestinians, meaning attacks are not uncommon and many women live in fear and insecurity. Often, women report they are scared their children will be arrested for being in the wrong place at the wrong time.

WCLAC has submitted a number of suggestions to the United Nation’s Committee on the Elimination of Discrimination against Women (CEDAW) for Israel’s 6th periodical review in 2016. Night raids were a prominent theme in the submission, noting that the frequency of raids had increased since the upsurge in violence in October 2015, and in that month alone 42% of testimonies claimed that soldiers made death threats. The submission urged that CEDAW include a section on night raids in its final report to Israel. Other issues directly affecting women included in the submission were the treatment of women’s rights defenders, the unlawful transfer of female prisoners outside of the occupied Palestinian territory, and the effect of Israel’s war in Gaza, including the enormous casualties and destruction of infrastructure, including water and sanitation structures.

In 2017, WCLAC contributed to the Human Rights Council’s Universal Periodical Review for Israel by submitting a report on the situation in Israel/Palestine regarding the treatment of Palestinian women and presence of gender-based violence. WCLAC identified specific issues which are having the largest and most detrimental effects on women. WCLAC argued that night raids were used to intimidate Palestinians and maintain a system of authority, resulting in long-term psychological effects on women and their children. In many cases, women have reported symptoms of trauma following a night raid. WCLAC recommended that Israel take immediate action to stop the abuses and violations against women and children by its forces.

In addition to the aggression and detrimental effects seen in night raids, Palestinian women are also subjected to the restrictions of a patriarchal system which culturally and socially weighs over women’s lives. In Gaza, WCLAC reported that while women in the occupied Palestinian territory face the highest levels of gender-based violence, they lack support services and ways to access them. Many offences will go unreported from fear of social consequences and lack of safe spaces. Israel’s blockade on Gaza traps civilians in a space without adequate resources or services, and with a lengthy, expensive, and exhausting process to attain them. During Ms. Dubravka Šimonović’s (the special rapporteur on violence against women), visit to the occupied Palestinian territory, WCLAC submitted data in regards to gender based violence in Palestine. The presence of dangerous and discriminatory acts perpetrated by patriarchal systems, and Israeli occupation, is an ongoing issue. Within her report, the special rapporteur noted the importance of WCLAC’s co-establishment of TAKAMOL, a legal-health-social service for women who are survivors of gender-based violence, and its establishment of centers providing services to battered women.

Most recently in WCLAC’s work, members of the center attended the 35th Session of the Human Rights Council in Geneva to co-host a special side-event on ‘Violence Against Women: The Case of Palestinian Women Under Occupation’. The event invited open dialogue between women’s rights experts and members of the audience about how occupational violence is intertwined with gender-based violence within family and society. One topic addressed was the discrimination women face under family reunification law, restricting them from accessing social benefits and medical care, and essentially stripping them from their rights as custodians over their Jerusalemite husbands.

For Shereen, a mother of four from Hebron who married a Jerusalem I.D. holder, the family reunification process has been lengthy and expensive. “For about nine years I lived in Jerusalem in fear; I couldn’t apply for family reunification because I was younger than 25 years old, thus I was not free to move around. I missed many of the family occasions at my parents’ house in Hebron, and also my family couldn’t visit me.” After applying in 2016, more than six months later she was still waiting for her permit, and now remains trapped in her home waiting for random checks to prove she lives in East Jerusalem. “I feel that I am a stranger living in my own country, I don’t have the most basic rights of living with my family and moving freely.”

Post a picture of the flowers you shared on social media, along with the message “By not holding Israel accountable to international law, the U.N. is allowing violence against Palestinian women and girls.” On Twitter you can tag U.N. Women @UN_Women, while on Facebook it is @unwomen (https://www.facebook.com/unwomen/). Include a link to this page of the Kumi Now website along with the hashtags #KumiNow and #Kumi6.

“The Deluge and the Tree” by Fadwa Tuqan

“The Deluge and the Tree”

When the hurricane swirled and spread its deluge
of dark evil
onto the good green land
‘they’ gloated. The western skies
reverberated with joyous accounts:
“The Tree has fallen!
The great trunk is smashed! The hurricane leaves no life in the Tree!”

Had the Tree really fallen?
Never! Not with our red streams flowing forever,
not while the wine of our thorn limbs
fed the thirsty roots,
Arab roots alive
tunneling deep, deep, into the land!

By Fadwa Tuqan, a famous Palestinian female poet of the resistance, published in the Palestine-Israel Journal of Politics, Economics and Culture at http://www.pij.org/details.php?id=94.