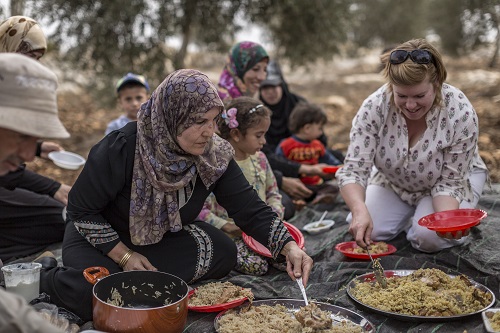 It is difficult to overstate the economic and symbolic importance of olive trees in Palestine. They are also a frequent object of violence: trees uprooted by settlers, farmers separated from their land by fences and checkpoints, and land seized for Israeli settlements. Zaytoun works to support olive producers in Palestine. Here’s what you need to know about olive oil production in Palestine and what you can do so that together we can rise up.

We thought we might be able to sell some of the olive oil in the United Kingdom for a fair price. We started out with a few hundred bottles that we sold to family and friends but the response was so positive and word got out amongst social justice groups, faith groups and fair-trade activists. We didn’t have a background in commerce and made the naïve suggestion that those interested pay upfront for the product and collectively we could bring in a container of olive oil. Soon money was pouring in and within 6 weeks we were able to commit to a full container. Based on this demand, we thought that perhaps there was something more we could do. And in 2004 Zaytoun – which means ‘olive’ in Arabic – was born. Our mission was to support farming families so they could build a sustainable income. We worked with the Canaan Fair Trade in Palestine to pioneer the world’s first Fairtrade certified olive oil in 2009. The range has continued to grow and is now available through wholesalers, independent shops, online and through our active network of volunteer distributors. We also run three trips a year for customers and supporters to visit Palestine and learn more about life for a farming family there, and we host producers in the UK once a year for Fairtrade Fortnight so that customers can hear first-hand about the unique challenges of working in Palestine. We also encourage people to visit Palestine through our three different trips to Palestine. It can be a life-changing experience, and is a great tool for awareness raising and of creating connections. Another simple and very effective way to support families in Palestine is through the Palestine Fair Trade Association’s Olive Tree Planting Project. The saplings are distributed and planted out in early spring by farmers affected by the occupation, particularly women farmers and those who have lost trees through military and settler activity. You can find out more here www.zaytoun.org/plant_a_tree.html.   You can find Zaytoun on their website at http://zaytoun.org/. Or find it on Facebook at https://www.facebook.com/pages/Zaytoun-CIC/170054474041, Twitter at https://twitter.com/Zaytoun_CIC/status/532503542637293568, Instagram at https://www.instagram.com/zaytoun_cic/, or Pinterest at http://www.pinterest.com/zaytounc/.

Olive production is the backbone of the Palestinian economy accounting for about 60% of cultivated land, and 100,000 households rely on olives for their primary income. But traditional trade is very difficult for people who live under Israeli military occupation. For example, how do you remain a farmer if your harvest doesn’t provide you and your family with a livelihood that’s sufficient to put food on the table and send your kids to school? How do you sell your produce when your village is completely cut off and isolated from markets and cities due to restrictions on movement? How long do you continue farming when the price your harvest fetches is below what it costs to produce it? Should you go and get a job knowing that this puts you at risk of losing your land because you’re not farming it? This is what life looked like in the West Bank in 2003 and these are the very real questions and dilemmas that farmers had to grapple with. It was also the year that supporters of Zaytoun made a life-changing trip to Palestine and experienced the warmest hospitality they have ever had in beautiful sun-drenched landscapes. Olive trees are a feature of rural Palestine, ancient rain-fed trees nestled on beautiful stone terraces farmed organically using the wisdom of many previous generations. It didn’t take long to see just how deeply olive trees are embedded in Palestinian cultural heritage and sense of identity. Because of their deep roots and hardiness, and ability to survive under arid conditions, olive trees have come to symbolise Palestinian steadfastness and resilience. The olive harvest is a wonderful time of year taking place in late October. It’s a truly communal family affair with several generations coming together in one communal activity – to bring the harvest home. There’s the baby parked under a tree and grandpa lighting a twig fire to make sweet mint tea while grandma and auntie unpack a picnic, which is often in fact a sumptuous feast. It is in this welcoming and warm context that Zaytoun learnt of the problems faced by the farmers. It was heartbreaking to hear that many had to give up their traditional way of life because they weren’t able to access markets and secure a decent price for their produce. They had to leave their beautiful villages to go to the cities to work as taxi drivers or labourers – sometimes on the very settlements that were encroaching and swallowing up their lands – because those were the only employment opportunities open to them. A recurring theme when talking to farmers is that the Israeli occupation had stripped them of dignity. They had to ask teenage soldiers for permission to access their own groves, and they had a deep sense of desperation about losing their land to the expansion of settlements and the Wall. They talked of having to sell their delicious oil at prices that were well below the cost of production.

Khadir Khadir, olive oil producer Khadir Khadir is now the youngest olive oil producer from the village of Nus Ijbail but from his teenage years into his twenties, he worked 12-16 hour days in Israeli plastic factories. He would leave the village for weeks and sleep in the factory where he worked. After ten years of working in terrible conditions, he decided that he wanted something more. He wasn’t that interested in farming but his father convinced him to help in the olive harvest that year. After just one season, Khadir decided that he could do more than collecting olives. He saved enough money to buy a tractor, which created another season of work for him because he was able to offer services to the village farmers. From ploughing their lands, delivering manure to their trees, to harvesting their crops, Khadir’s fingerprints are in every piece of land in his small community of 350 inhabitants. He makes it a point to help each farmer the best way he can because, as he says, “Our village is very small, most young people have left and the farmers that are still here are mostly older folks. I have to help. I profit for sure but my village is also my family. In harvest season we all help each other. My father, my friends, my wife, there are always more people ready to help than not.” Khadir is passionate about farming, and is looking to the future. “I want to see if I can revive the old fruit trees in this valley. We used to have so many fruit trees in our village but with climate change even the indigenous fruit trees are not doing so well anymore. I want to experiment so I can compare what happens to the trees I plant here and the trees I have planted in the mountain.” Khadir’s dream is to build a house for his family on a hilltop on his land. He is confident that one day he will achieve that but for the time being he says, “The most important thing to me is that I no longer have to work in an Israeli factory and be separated from my family and wife. I may have a humble house now but I make a decent living that allows me to go to sleep every night in my home with my wife and children, and not in a noisy factory. I consider myself to be a very lucky man.”

Get your community involved by asking a restaurant, cafeteria, or coffee shop to change the name of a special dish or beverage to “Free Palestine,” either for the week, or permanently.   Post photos of your dish or beverage with their changed names on social media. Include a link to this page of the Kumi Now website along with the hashtags #FreePalestine, #KumiNow, and #Kumi52.

Gate of the Sun by Elias Khoury “When the Israelis entered al-Birwa, they blew it up house by house. They didn’t take our clothes and rags. They were like madmen. They blew up the houses and began bulldozing them; they trampled the wheat and felled the olive trees with dynamite. I don’t know why they hate olives.” Actually, why do they hate olives? You told me about Ain Houd and the peasants they chased out of their village, which was renamed En Hud. The peasants wandered the hills of Jebel Karmal, where they built a new village, which they named after their old village. You were telling me about them because you wanted to explain your theory about the secret population that stayed behind over there. “I wasn’t the only one,” you said. “We were a whole people living in secret villages.” You told me how the Israelis changed the original village into an artists’ colony and how the peasants live in their new, officially unrecognized village with no paved streets, no water, no electricity, nothing. You said there were dozens of these secret villages. And you asked yourself why the Israelis hate olive trees. You mentioned how they planted cypress trees in the middle of the olives groves at Ain Houd, and how the olive trees were ruined and died under the onslaught of the cypresses, which swallowed them up. How can they eat without olive oil? We live on olive oil, we’re a people of olive oil, but them, they cut down the olive trees and plant palm trees. Why do they love palms so much? From Gate of the Sun by Elias Khoury, a prominent Lebanese novelist, playwright, and critic.

Extreme Rambling: Walking Israel’s Separation Barrier. For Fun. By Mark Thomas Good fences make good neighbours, but what about bad ones? The Israeli barrier is probably the most iconic divider of land since the Berlin Wall. It has been declared illegal under international law and its impact on life in the West Bank has been enormous. Mark Thomas decided the only way to really get to grips with this huge divide was to use the barrier as a route map, to ‘walk the wall’, covering the entire distance with little more in his armoury than Kendal Mint Cake and a box of blister plasters. Israeli Apartheid – Second Edition: A Beginner’s Guide by Ben White Since its release in 2009 Israeli Apartheid: A Beginner’s Guide has become an essential primer for undergraduate students and activists getting to grips with the Palestine/Israel conflict for the first time. Ben White skilfully distills the work of academics and experts into a highly accessible introduction. This new updated and expanded edition includes information on the Israeli blockade and attacks on the Gaza Strip since 2008, new policies targeting Palestinian citizens of Israel and the growth of the global Boycott Divestment Sanctions campaign. Packed with vital information, quotations and resources, Israeli Apartheid never loses the human touch. The book is rooted in the author’s extensive personal experience in Palestine and includes testimonies by Palestinians describing how Israeli apartheid affects their daily lives. Zaytoun’s Resources: