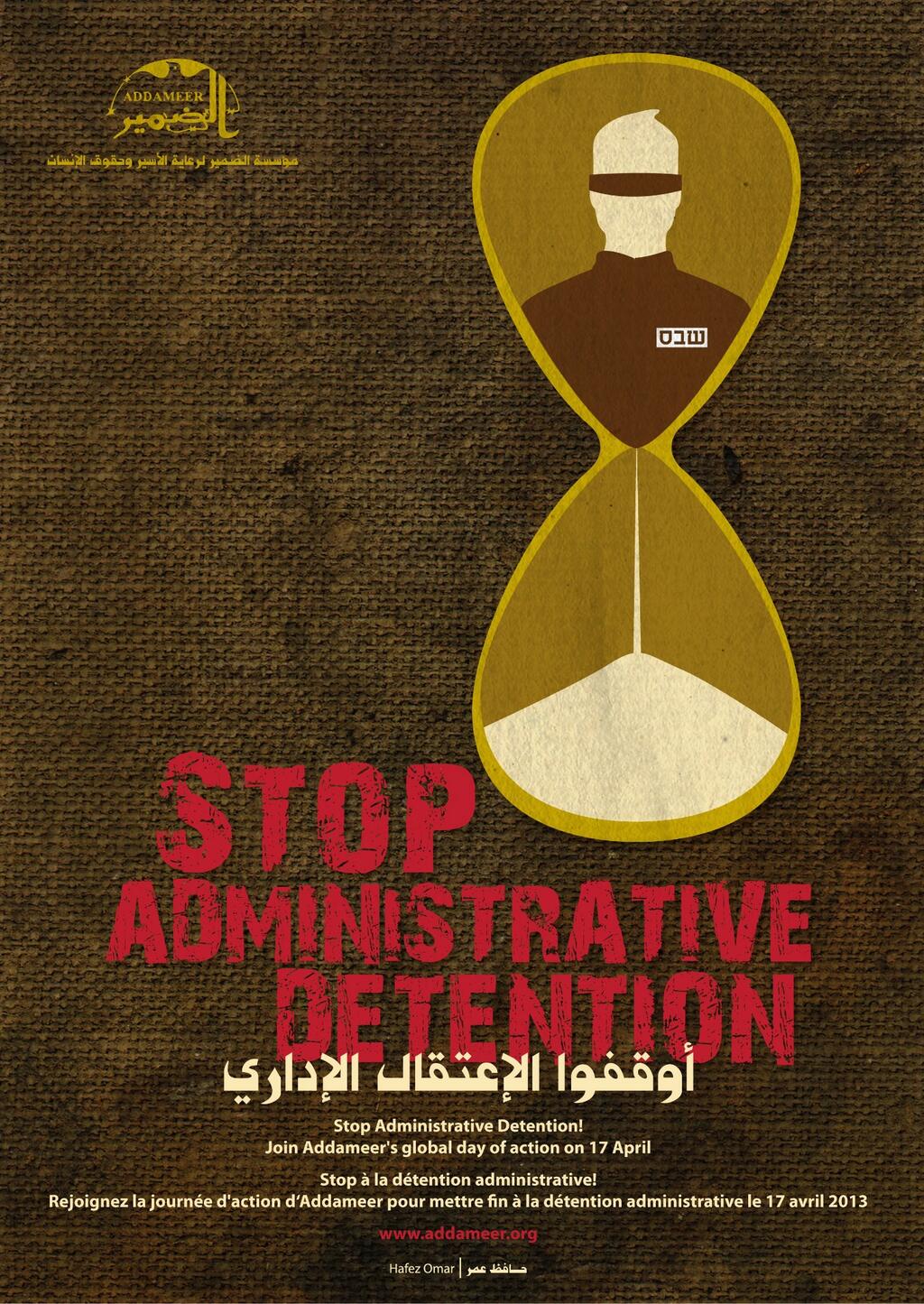 As the case of Ahed Tamimi makes clear, Palestinians detained by the Israeli military can be held indefinitely, with few legal rights. But unlike Ahed Tamimi, most cases do not gain international attention. The Addameer Prisoner Support and Human Rights Association exists to help prisoners trapped in this legal no-man’s land. Here’s what you need to know about administrative detention and what you can do so that together we can rise up.

Addameer (Arabic for ‘conscience’) Prisoner Support and Human Rights Association is a Palestinian non-governmental, civil institution that works to support Palestinian political prisoners held in Israeli and Palestinian prisons. Established in 1992 by a group of activists interested in human rights, the center offers free legal aid to political prisoners, advocates for their rights at the national and international level, and works to end torture and other violations of prisoners’ rights through monitoring, legal procedures, and solidarity campaigns.

You can join the campaign against administrative detention by:

Since the beginning of the Israeli occupation in 1967, Israeli forces have arrested more than 800,000 Palestinians, almost 20% of the Palestinian population with a majority being men. Therefore, about 40% of all male Palestinians have been arrested. The frequency of the use of administrative detention has been steadily rising since the outbreak of the second intifada in September 2000.

Thabet Nassar, his wife Rana, and their children woke to the sounds of weapons and explosions and found more than 40 Israeli soldiers surrounding their home in Madama village, near Nablus. The soldiers broke through the front door and raided their home. They forced the terrified children to sit in one room and took Thabet to another filled with soldiers. The intelligence officer started interrogating Thabet while the rest of the soldiers continued to destroy the family’s belongings, including the children’s rooms and toys.

The soldiers used knives to rip the mattresses and huge hammers to demolish parts of the walls. They destroyed the family’s memories piece by piece. The hostility did not end there; the soldiers continued to cut down all of the trees, destroying the garden. One of Thabet’s children, Yamen (8-years-old at the time), approached the intelligence officer asking to say goodbye to his father. The officer yelled at Yamen and threatened to beat him if he left the room.

After two hours of ransacking the home, the soldiers blindfolded and shackled Thabet and took him away without informing the family of the reasons behind the arrest or the place of detention. On the third day interrogators told him that an administrative detention order had been issued. The interrogator started asking him about his political affiliation and military activities and accused him of incitement via Facebook, despite the fact that Thabet does not have a Facebook account. Thabet denied all of the accusations.

Next, the occupation’s military commander issued a six-month administrative detention order against Nassar. Thabet was only free for six months, during which he had an interview with the occupation’s intelligence office and received many calls threatening to arrest him. He has spent a total of 12 and a half years in Israeli prisons and detention centers, most under administrative detention.

In almost all of the hearings, the military prosecution claimed that he is involved in PFLP military activities without proving these accusations, since Thabet’s detention is based on a secret file. Thabet’s order was renewed for six additional months immediately after the original order ended.

The occupation forces resort to administrative detention when they fail to prove the accusations against a detainee. If Thabet did pose a threat to the security of the state, why isn’t he being clearly presented with charges? Thabet was denied a fair trial and does not know the reasons behind his arrest, which is a form of psychological torture violating international standards.

Thabet and Rana got married in 2007. They have four children: Yamen (9), Amal (7), Mais (3), and Ahmad, born after his father was arrested. Thabet’s parents used to visit him in prison, sometimes taking Yamen and Amal with them. However, this time he is being held in Naqab, about three hours away. Rana says: “I feel bad for Mais, for she is too young to go with her grandparents for such long distance, and she hasn’t seen her father since the day of his arrest…He spent 7 months with her and she got used to having her father around, so him disappearing suddenly without giving her a reason was very difficult for her to understand.”

A full version of Thabet’s story was originally published by Addameer at http://www.addameer.org/prisoner/thabet-nassar

Look at the Kumi website and pick a name from the list of individuals who have been detained this month. “Continue to remember those in prison as if you were together with them in prison, and those who are mistreated as if you yourselves were suffering” (Hebrews 13:3). Blindfold yourself for 15 minutes, 30 minutes, or an hour.  Do not talk, do not eat, do not drink. Think about how you can end this exercise at any time, but this prisoner held by authorities who don’t respect the rule of law does not have this luxury. How would that feel? What impact would it have on your family?

Then, write about your feelings and understanding of administrative detention and the inhumane treatment of detainees in a solidarity letter. Share your writing on Facebook,Twitter, or Instagram. Be sure to begin your post with a clear message, noting your own privilege, such as “I could stop this exercise at any time, but prisoners in administrative detention could not.” You could also share a photo of yourself blindfolded. Include a link to this page of the Kumi Now website along with the hashtags #StopAD, #KumiNow, and #Kumi26.

This activity can be done individually or in a group, privately or in public. If done with a school or church group, consider discussing your feelings before or after you write. The goal is to help people understand that ‘administrative detention’ is not just ordinary prison with a more sinister name, but an actual system of abuse and torture that has no place in any society.

One may well ask: “How can you advocate breaking some laws and obeying others?” The answer lies in the fact that there are two types of laws: just and unjust. I would be the first to advocate obeying just laws. One has not only a legal but a moral responsibility to obey just laws. Conversely, one has a moral responsibility to disobey unjust laws. I would agree with St. Augustine that “an unjust law is no law at all.”

Now, what is the difference between the two? How does one determine whether a law is just or unjust? A just law is a man-made code that squares with the moral law or the law of God. An unjust law is a code that is out of harmony with the moral law. To put it in the terms of St. Thomas Aquinas: An unjust law is a human law that is not rooted in eternal law and natural law. Any law that uplifts human personality is just. Any law that degrades human personality is unjust. All segregation statutes are unjust because segregation distorts the soul and damages the personality. It gives the segregator a false sense of superiority and the segregated a false sense of inferiority. Segregation, to use the terminology of the Jewish philosopher Martin Buber, substitutes an “I it” relationship for an “I thou” relationship and ends up relegating persons to the status of things. Hence segregation is not only politically, economically and sociologically unsound, it is morally wrong and sinful…”

From “Letter from a Birmingham Jail” by Martin Luther King, Jr., a minister and activist who became the most visible spokesperson for the American civil rights movement.  Published at https://www.theatlantic.com/politics/archive/1963/08/martin-luther-kings-letter-from-birmingham-jail/274668/

Defense For Children International – Palestine http://www.dci-palestine.org has more information on children in detention