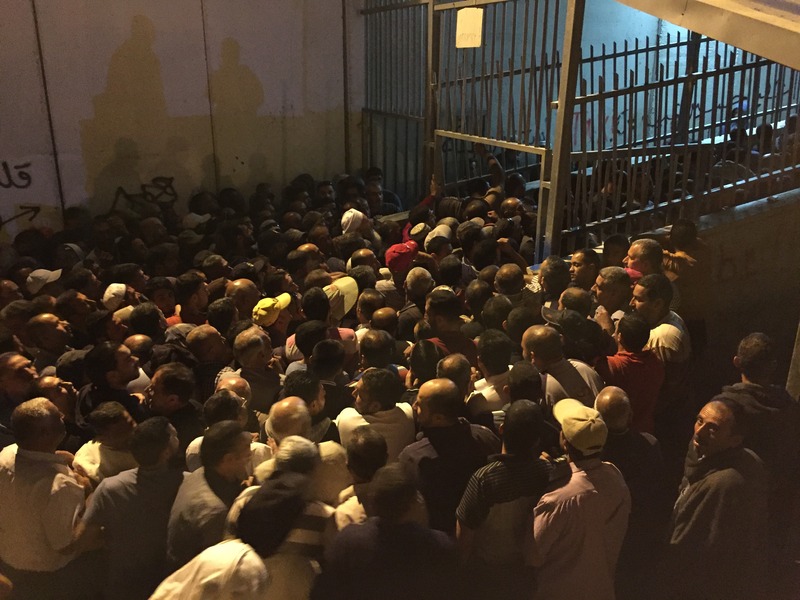 Machsom is the Hebrew word for checkpoint. MachsomWatch is a volunteer organization of Israeli women who are peace activists from all sectors of society. We oppose the Israeli occupation in the area known as the West Bank, we oppose the appropriation of Palestinian land and the denial of Palestinian human rights. We support the right of Palestinians to move freely in their land and oppose the checkpoints which severely restrict Palestinian daily life.

Since 2001 we have been observing and reporting on the Israeli military occupation. On a daily basis, we monitor the West Bank checkpoints, the separation fences, the agricultural gates, the military courts, and Palestinian villages. We document what we see and what is reported to us by local Palestinians.

Through our observations, reports, films, photographs and tours we aim to influence public opinion in Israel and throughout the world by recording and authenticating the impossible conditions faced by Palestinians under Israeli occupation; conditions which also corrode the fabric of Israeli society and the values of democracy. We attempt to ease the frustrations and hardships of Palestinians by offering formal assistance wherever we can.

Finally, we urge you to follow our reports in English that appear on our website. We also sometimes post reports in English on our Facebook page, and we encourage you to follow us and share our reports.  Occasionally, the mainstream press will carry articles about the checkpoints, and we encourage you to write to your ambassadors who are stationed in Israel to protest the checkpoints. You can also contact your ambassador about the ongoing attacks against human rights organizations in Israel, and let them know that you support the work of these groups.

MachsomWatch has been monitoring and reporting on the checkpoints since 2001. The checkpoints severely restrict Palestinians’ most basic right of freedom of movement, including the liberty to leave and return, travel, study, worship, work, conduct business, access medical care, grow food, access agricultural land and water. While many of the checkpoints have become more permanent structures, some are also spontaneous. All are designed to impede and control Palestinian movement within the occupied Palestinian territory, and in some places, between the occupied Palestinian territory and Israel. While Israeli soldiers administer some of the checkpoints, nowadays many of them are managed by private security companies.

Tens of thousands of Palestinians cross through the checkpoints every day. At dawn, the large checkpoints are very crowded; passage is slow and very controlled, requiring people to wait in line for several hours so that they can reach their transportation on the Israel-facing side by morning. Passage through the checkpoints requires permits issued by the military administration for employment, medical reasons, education, and so forth.  In addition, in about 25 villages in the central part of the West Bank, Palestinians are compelled to cross through agricultural gates to reach their lands trapped on the other side of the “Security Barrier.” Difficulties in obtaining permits, or the issuing of a permit for only one family member has led many Palestinians to cease cultivation of lands, leading to their confiscation by the Israeli authorities.

Although the presence of checkpoints and the need for permits to travel between Israel (including Jerusalem) and the occupied Palestinian territory have become part of Palestinians’ daily lives, they also leave Palestinians in a sense of constant limbo, as they never know if they or their family members will reach their destination or if they can return. Palestinians are often unable to cross through these various checkpoints, because suddenly they find that their permits are not valid, as they have been blacklisted by the Israeli Security Agency for supposed security reasons, or by the police for reasons as mundane as having received a speeding ticket. The reasons for the blacklistings, and the ability to challenge the blacklisting are also never made apparent to Palestinians.

Over the years, we also began to observe and report on the military courts, where Palestinians are tried for all kinds of claims of security infringements, including such things as being in Israel without a permit, belonging to a “hostile organization,” possessing weapons and being accused of having the intent to kill Israelis. We attend these hearings and report on them regularly, serving as Israeli civilian witnesses in a deeply flawed court system that only tries Palestinians from the West Bank and Gaza, and which violates principles of democracy. We believe that if we did not attend and report on these hearings, nobody would know about the existence of the military courts, and about the Palestinians who are being tried. We believe that every person deserves a democratic and fair trial, which is impossible in the military courts.

Every Palestinian in the occupied territory is affected by the checkpoints specifically and by the Israeli occupation in general, and our personal stories come from people we meet at the checkpoints, the military courts, and in other parts of the occupied territory. This is just one of thousands of absurd, frustrating, and upsetting stories of Palestinians that we have encountered.

When Jamal wanted to return the herd of ewes to the sheepfold so they could nurse their lambs, his herd was not allowed to pass. The Israeli Occupation Forces cited security reasons as to why the herd could not return to the land that he owned on the Israeli side of the fence. As a result, the shepherd was forced to buy powdered milk from a veterinarian, prepare it, and feed it to the lambs using buckets with plastic teats.

A week after this particular incident, journalist Amira Hass wrote in Haaretz newspaper about this situation (https://www.haaretz.com/opinion/.premium-like-sheep-to-the-separation-1.5428319). Eventually Jamal Hanina was able to reunite his lambs with the ewes on the Palestinian side of the barrier.

Since then, for more than a year, he has not been able to pass through the agricultural checkpoint with his sheep to take them to the pasture on the property that he owns on the wrong side of the fence.

Originally published by MachsomWatch at https://machsomwatch.org/en/node/23665

Every time you go through a door or cross the street, wait for a minute to try to better understand what it is like to not have the freedom of movement like many Palestinians. If walking with someone, share the ‘why’ behind your waiting: checkpoints prevent many Palestinians from freely moving around. Write about the importance of freedom of movement on  social media alongside a picture of one of the military checkpoints. Include a link to this page of the Kumi Now website along with the hashtags #HumanRights, #KumiNow, and #Kumi13.

From A Land Without Borders: My Journey around East Jerusalem and the West Bank by Nir Baram

Evening is considered the time of day when traffic through Kalandia is at its lightest; the big rush is in the morning, when Palestinian laborers who work in Jerusalem have to get through. We crowd in under a shelter alongside dozens of men and women. It’s quiet and tense, and almost no one talks. The cab driver who brought us here, an Israeli resident with a blue ID card, told us he spent his whole life in West Jerusalem, but now he has no transit permit and he hasn’t seen the city in four years. “At the checkpoint, you’re always focused on one thing,” he says, “will they let you through or will there be trouble? It’s the humiliation, the uncertainty you have no control over your day-to-day.”

We stand in line to get to an iron turnstile. Every so often we hear a loud beep and three people walk through the turnstile, which immediately locks behind them. The three who get through stand in a sort of holding area, and one by one they go up to a window and present their ID cards.  If their papers are in order, they must take off their coats, belts, and sometimes shoes, and put them through a scanner along with their bags. If another beep sounds and a red light goes on, they also remove their shirts and put them in the machine. It takes a few minutes for three people to get through, but if the soldiers find a problem with the papers, the process can drag on for fifteen minutes. It’s been almost an hour and we’re close to the gate now, with a line of about eighty people stret ching behind us.  In the morning, that number can reach up to a thousand.

From A Land Without Borders: My Journey around East Jerusalem and the West Bank, by Nir Baram, an Israeli journalist, editor, and author. Translated by Jessica Cohen. Melbourne: Text Publishing, 2016. Loc 2053, Kindle.

You can also check out our videos, many taken at the checkpoints: https://www.youtube.com/user/machsomwatchvid

The website of the UN Office for the Coordination of Humanitarian Affairs in the Occupied Territories (OCHA) has an excellent map detailing the checkpoints in their various forms: https://www.ochaopt.org/content/west-bank-access-restrictions-january-2017

If you are interested in knowing more about the private security companies that manage many of the checkpoints, see the 2016 report “Private Security Companies and the Israeli Occupation,” by WhoProfits, for which we supplied some of the data and information: https://www.whoprofits.org/sites/default/files/private_security_companies_final_for_web.pdf