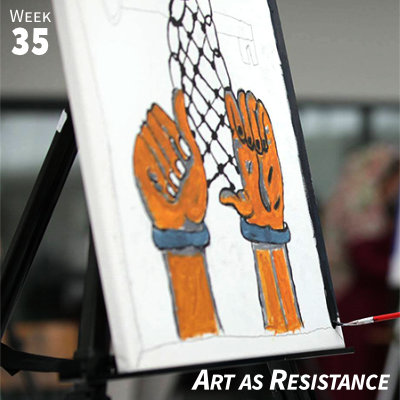 Art as a creative tool of resistance is a cornerstone of a successful nonviolent resistance. While some resist the occupation with stones or guns or worse,  and others turn to politics or religion, still others turn to art. One such artist was Naji Al-Ali, the political cartoonist who created Handala. Naji Al-Ali was assassinated for his art, and died on August 29, 1987. In honor of Naji Al-Ali, and all the brave Palestinian artists who have risked their lives in the service of truth and art, this week we look at art as resistance in Palestine. Here’s what you need to know about Palestinian artists engaging in nonviolent resistance and what you can do so that together we can rise up.

“We say that our option as Christians in the face of the Israeli occupation is to resist. Resistance is a right and a duty for the Christian. But it is resistance with love as its logic. It is thus a creative resistance for it must find human ways that engage the humanity of the enemy.” (Kairos Palestine Document 4.2.3.)

Palestinians once believed the Israeli-Palestinian conflict was a sprint. Participants behaved accordingly and were soon out of breath. However, people now realize that this conflict, one of the longest in modern history, is a marathon. In a marathon, people need to breathe differently, to train in another way and to run in a well-trained speed. One must have a long breath.

Too often the Palestinian tragedy is portrayed as a humanitarian crisis rather than one that has to do with identity and self-determination. They believe art is a luxury that Palestinians cannot afford. That, instead, what they need is bread to eat, to fill their stomach, so they can think and live another day. But people “shall not live by bread alone” (Matthew 4:4). Art and culture instead feed the soul and allow it to thrive. It gives people the strength to refuse being on the receiving end, perceived as victims. It allows people to become actors instead of spectators. It gives them the long breath necessary to resist.

For wherever there is occupation, there will be resistance. The question therefore is not whether to resist, but how to resist. A people hungry both in body and in soul will lash out in violence. Violence that is unacceptable and will lead to another loss. Art resists this. Art becomes both a means of sustenance and a path of resistance, as Tawfiq Zayyad, a poet from Nazareth, realized when he wrote in “Here We Shall Stay”:

But art does more than just reaffirm the humanity and focus of the resistor; art is an important bridge between Palestine and the rest of the world.

Without this bridge, the offenses of the illegal border wall and the Israeli army would go unnoticed by an inward-looking Western world sympathetic to Israel.

Works like Joe Sacco’s Palestine bring the suffering in the occupied Palestinian territory to an English-speaking audience. DAM’s success with songs like “I Fell in Love with a Jew” show the inequity between Jews and Palestinians. Nas Daily’s success on Facebook builds a bridge to audiences not reached by traditional media. And Banksy and other international artists, with the Santa’s Ghetto project and The Walled Off Hotel (respectively covering the wall with murals and making it the view from a boutique hotel) have brought awareness to the wall and its 709 kilometers of oppression. As Ron English writes in Against the Wall: Art of Resistance in Palestine, “So how do you bring a wall that’s far enough away to ignore, close enough to see … ? For me, the answer is simple. Paint it. Make it easier to see.”

Without this bridge, the rest of the world is left with Hollywood for its understanding of the Palestinians and their beliefs, hopes and dreams.

But “Absent from Hollywood’s Israeli-Palestinian movies are human dramas revealing Palestinians as normal folk … No movie shows Israeli soldiers and settlers uprooting olive orchards, gunning down Palestinian civilians in Palestinian cities. No movie shows Palestinian families struggling to survive under occupation, living in refugee camps, striving to have their own country and passports stating ‘Palestine.’” This is the conclusion of Jack G. Shaheen in Reel Bad Arabs: How Hollywood Vilifies a People. Instead, “Palestinians appear as ‘terrorists,’ never as innocents who suffer under Israeli occupation.”

Sadly, Palestinian art, and art depicting Palestinians and Muslims in a positive light, is seldom available and vastly outnumbered by the negative stereotypes. Films or shows depicting Palestinians positively (such as Hanna K, The Little Drummer Girl, and Amreeka) are rarely available. Many of the works by famous authors like Ghassan Kanafani and Fadwa Tuqan are left untranslated into English, and what has been translated is often out-of-print or not available digitally. And the works of Mahmoud Darwish and Kahlil Gibran are relegated to the distant corners of large bookshops and, like other art, music, and film created by Palestinians, almost never championed outside the Palestinian territory.

Art, then, reinforces Palestinians’ humanity, giving them the long breath necessary to continue the peaceful fight for freedom. But art works to bring awareness to the long struggle in a world both eager to move on from past mistakes and distracted by the latest Twitter controversy. Finally, and perhaps most important, art must counter the dominant media portrayal of Palestinians as terrorists. In this encounter, Palestinians and their supporters must realize that we are resisting colonial domination, multinational corporations, and a dominant culture that tries to silence our voices. Art thus becomes the means to give face to the struggle, write melodies to the Palestinian narrative, and to join hands in constructing a new reality.

Through the week, we will highlight ways that artists are participating in nonviolent resistance in Israel and Palestine and publish stories from organizations that promote art as resistance.

Poem by Tawfiq Zayyad as translated in Palestinian Music and Song: Expression and Resistance Since 1900.

Baha Abu Shanab, a 19 year-old Palestinian from the Hebron area, went to Dar al-Kalima University College of Arts and Culture to study tourism and become a tour guide. But after his first semester Baha decided that tourism was not the path for him and changed his major to film. Dar al-Kalima has the first and so far only film program in Palestine. At Dar al-Kalima, Baha discovered his gifts and talents and the university invested in his strength.

For his graduation class, Baha directed a film about Checkpoint 300, the military checkpoint separating Bethlehem from Jerusalem. For over a month, Baha went to the checkpoint on a daily basis, as early as 2am when the first Palestinian workers who work in Jerusalem or Israel begin to arrive. He filmed what Palestinian workers are facing daily at the checkpoint. In his documentary film entitled “The Living of the Pigeons” (named after a line in a poem by Mahmoud Darwish), there is only one interview; the images are more powerful than a thousand words. The film provides glimpses of the surreal early morning hours and the daily experience of rush hour that Palestinian workers face at Israeli checkpoints. Baha’s film has won several awards: Best short documentary at Zayed University Middle East Film Festival (2015), Best Foreign Movie Award at Chalontout Court Festival (2016), and Best Movie on Palestine, Al-Ard Award at Al-Ard Doc Film Festival (2016), the Amnesty International award at the Poitiers Film Festival (2016), and best short film at Festival Cin-Palestine Short Film Competition (2017).

More important than the awards themselves, the film became a creative and powerful tool to tell the Palestinian story in a new way. The film became an advocacy tool giving a face to the occupation and humiliation in a way words can’t. So far, the film has been screened at over 18 international film festivals and young Baha has become an ambassador for his people. Baha’s film is just one example of what we mean by creative resistance.

It is not a coincidence that many of the artists and works of art listed above that have reached an audience outside of the occupied Palestinian territory are created by non-Palestinians. Palestinian art, for the most part, remains trapped in Palestine along with its people. We ask that you help Palestinian art cross those borders by doing one of the following:

Ask your church, place of worship, school, or a community hall to host a screening of a film telling the story of the Palestinian people. Engaging with your community is part of advocacy! If you are unable to find a public space, host a film screening in your own home. Give preference to films produced by a Palestinian. See the list of Additional Resources near the back of the book for lists of documentaries and films.

If you are involved with a church, gallery, concert venue, theatre, or school host or produce a show of Palestinian art or featuring Palestinian artists.

Share a picture of your screening or art show on social media. Tag Dar al-Kalima and include a link to this page of the Kumi Now website along with the hashtags #KumiNow and #Kumi35.

Literature: “Think of Others” by Mahmoud Darwish

“Think of Others” by Mahmoud Darwish, regarded as the Palestinian national poet, from Almond Blossoms and Beyond. Translated by Mohammed Shaheen, Interlink Books 2010.