Coalition of Women for Peace 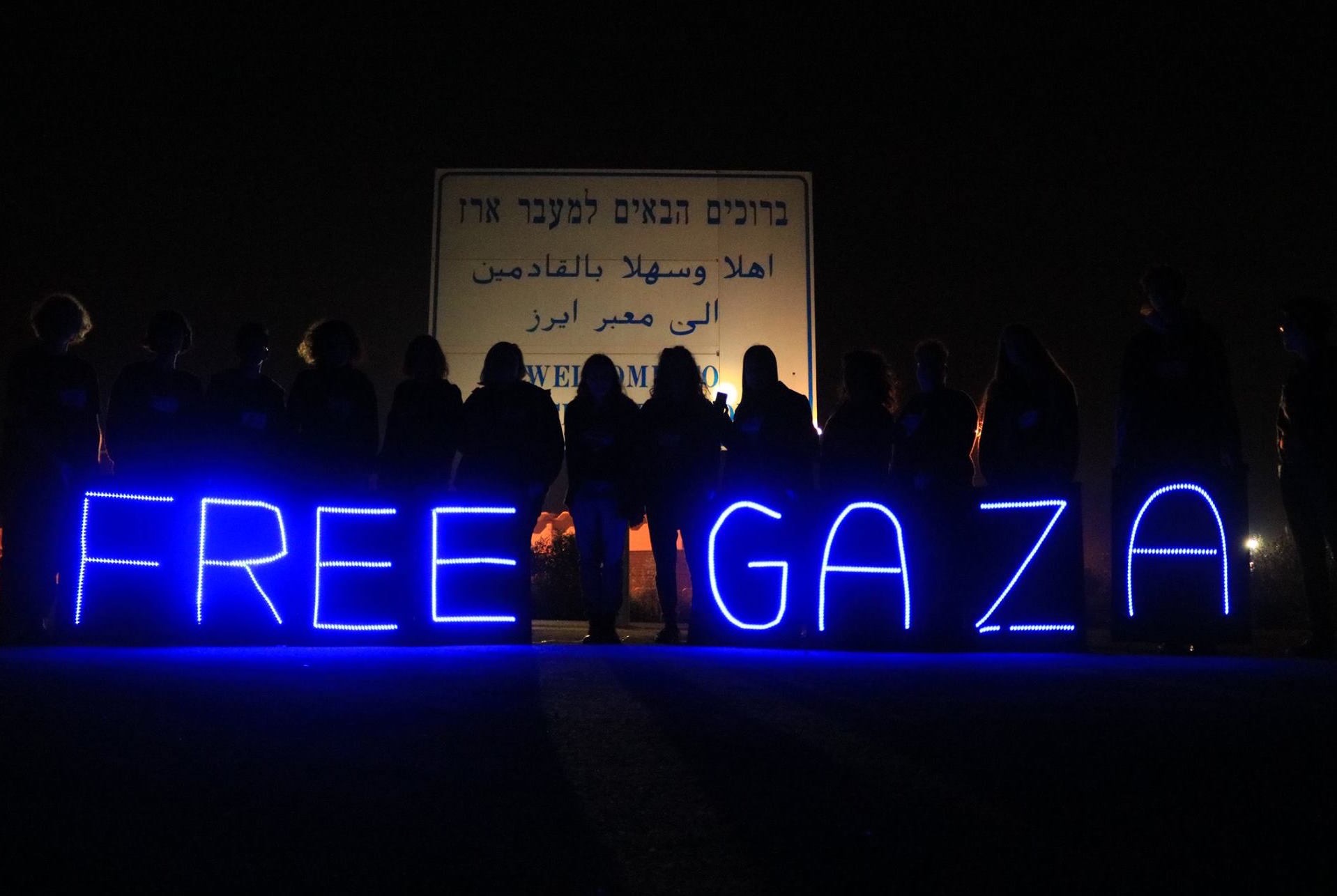 Coalition of Women for Peace
Women of Gaza

The humanitarian crisis in Gaza comes with additional struggles for its women. The Coalition of Women for Peace (CWP) is working to help the women of Gaza. Today CWP is a leading voice in the Israeli peace movement, bringing together women from a wide variety of identities and groups. Here’s what you need to know about the situation and what you can do so that together we can rise up.

The Coalition of Women for Peace (CWP) is a feminist organization active in the struggle to end the Israeli occupation of Palestine, for the liberation of the Palestinian people from oppression, for the creation of a society based on principles of justice and equality, and for securing life and dignity for all the inhabitants of Israel/Palestine.

Organizations and international institutions are warning that Gaza is on the verge of a humanitarian crisis in spite of the humanitarian aid provided by the international community. Already now, Gaza is facing a water crisis, extreme pollution, electricity shortage, restricted access to health services and education, as well as economic distress. All these hardships turn life into a daily struggle for survival for Gaza’s residents, both women and men. This situation is the cumulative outcome of a decade‐long siege on Gaza in addition to the frequent military offensives on the strip every few years and the failed attempts at reconstruction between these rounds.

The Gaza Strip is under a high degree of control by Israel and is therefore under its occupation. Israel has repeatedly refused to fulfill its obligations under international law.

Amidst all this, women are dealing with a wide range of gender-specific challenges. Women living under occupation and siege suffer from both the Israeli army’s violence as well as the violence of their own society. They suffer from restrictions to health care, hygiene, and basic necessities, along with difficulties in areas of employment. The struggle against Israel’s policies vis-a-vis Gaza compels us to stand alongside women as they struggle for rights in their own society.

During the 2014 war on Gaza, 299 women were killed, 16 of whom were pregnant. At least 142 families lost three or more members, and 700 women were left widowed. Approximately half a million residents were forced from their homes, of which 20 percent have yet to return to permanent residence. Humanitarian groups and human rights organizations around the world have warned of an impending humanitarian crisis in Gaza. Although there have been attempts to rehabilitate Gaza with foreign funds, it is clear that it is only a matter of time until Israel decides to attack Gaza again, rendering any attempts at reconstructing Gaza over the past two years redundant. Restricting trade and controlling the economy is just one more way in which the Israeli authorities exert power and violence, influencing every aspect of life in Gaza. Only once the siege is lifted and the occupation comes to an end can we begin to truly rehabilitate lives, families, and the economy.

The following quotes are by Gazan women who participated in our ‘WOMEN BEYOND THE SIEGE’ conference in Yaffa via video conference on March 29th, 2017:

Noor Swirki: “The siege has direct and indirect impact on the lives of women. Indirectly, it influences society and society throws the burden on young women as they face two kinds of pressure. The one from their patriarchal society, and how it treats young women and their dreams and hopes. And the pressure of a society living under great siege.”

Hiba Al-Danf: “The 2014 war is still stuck in the heads of Palestinian women, and it affects all of their daily and human energies – even the relationships in their families. The women who suffered loss and even those who didn’t are afraid of becoming bereaved one day.”

My activism is political, social, and cultural. One of the most important challenges I face is the fact that I live in Gaza, which has been under siege for more than seven years now. I have missed several opportunities to travel and study abroad because of the blockade. This blockade is fatal not only for my freedom and liberty of movement, but also for my intellectual and cultural development. I am very ambitious, but the conditions of the blockade, the war on Gaza and the occupation (both direct and indirect) prevent me from achieving what I wish to achieve.

I am active in the Boycott, Divestment, and Sanctions campaign against Israel, known internationally as BDS. I joined the campaign directly after the war on Gaza in 2008-2009. One of the most important factors that pushed me to do so was the helplessness I felt during the war. I consider the Boycott campaign to be a weapon of resistance and a chance to show the world the real face of Israel.

I would like to stress that ending the occupation is a necessity, because it is illegal. I do not think that by ending the occupation we can guarantee a solution to the Palestinian-Israeli conflict. We must still talk about the return of the refugees. I support the idea of living in a single democratic and secular state for all, regardless of any differences of race, religion or gender. I would also like to see some cultural life in Gaza; we have no theaters here, no cinemas, and no concerts.

During the assault on Gaza, I was active on an individual level and focused my work on supplying humanitarian aid during the “humanitarian ceasefires”, which were generally violated by the Israeli army in order to kill more people.

I also wrote in English about my experience and the reality I was living, and published this writing on the Internet so the world could see the daily life in Gaza under the airstrikes and destructions.

I do not think there is a single person in Gaza who was not hurt during the war. I think we all suffered at least psychologically, even though we tried not to let it show sometimes. During the last assault, I lost several friends and relatives. Others have become handicapped or homeless after their houses were destroyed, while other friends lost their jobs, after their workplaces were bombed.

We live in the city of Deir al-Balah, in the center of the Gaza Strip, which is why many relatives sought refuge in our house, even though it was no longer safe. No place in Gaza was safe, and now no place in Gaza remains undestroyed or free of suffering. There is no electricity, no potable water, no emergency medications, and no infrastructure. There are thousands of destroyed houses. To top that, no one can leave the Strip. Education is in bad shape as well and there is a considerable increase in unemployment.

My activities are not free of challenges and social pressure that seek to disturb or stop it. But I am of the opinion that the occupation feeds this pressure. For example, if Gaza were not under siege, I could have moved to any other place in Palestine in order to work and be independent. However, the current situation only increases the social pressure and this ties me down.

When I exercise my activism in Gaza, I do not face the occupation directly, but it is there, lurking in every corner of the Strip. The occupation fights us from a distance; it is a hindrance to our lives and our work without direct engagement.

Originally published by CWP in “This is What Happened: Testimonials of Women Human Rights Defenders Resisting the Israeli Occupation” at http://www.coalitionofwomen.org/wp-content/uploads/2017/07/WHRD-english-web.pdf

On your Facebook account “check in” to Gaza for one week with a photo that says “Open Gaza” in solidarity with those who actually live there. Change your hometown or place of residence to “Gaza” on all of your social media accounts for one week. Also, share one of the short videos or other items listed under ‘Additional Resources’ on social media and include links to this page of the Kumi project and the Coalition of Women for Peace webpage. Include a link to this page of the Kumi Now website along with the hashtags #OpenGaza, #KumiNow, and #Kumi20.

Suheir Hammad is a poet, author, and activist. Originally born in Jordan, she is the daughter of two Palestinian refugees. See Suheir Hammad perform her Gaza Suite at the Palestinian Festival of Literature: https://www.youtube.com/playlist?list=PL24665C51CAFAC0DB. You can also see a video of her appearance at a TED conference at https://blog.ted.com/text-of-what-i-will-by-suheir-hammad/.