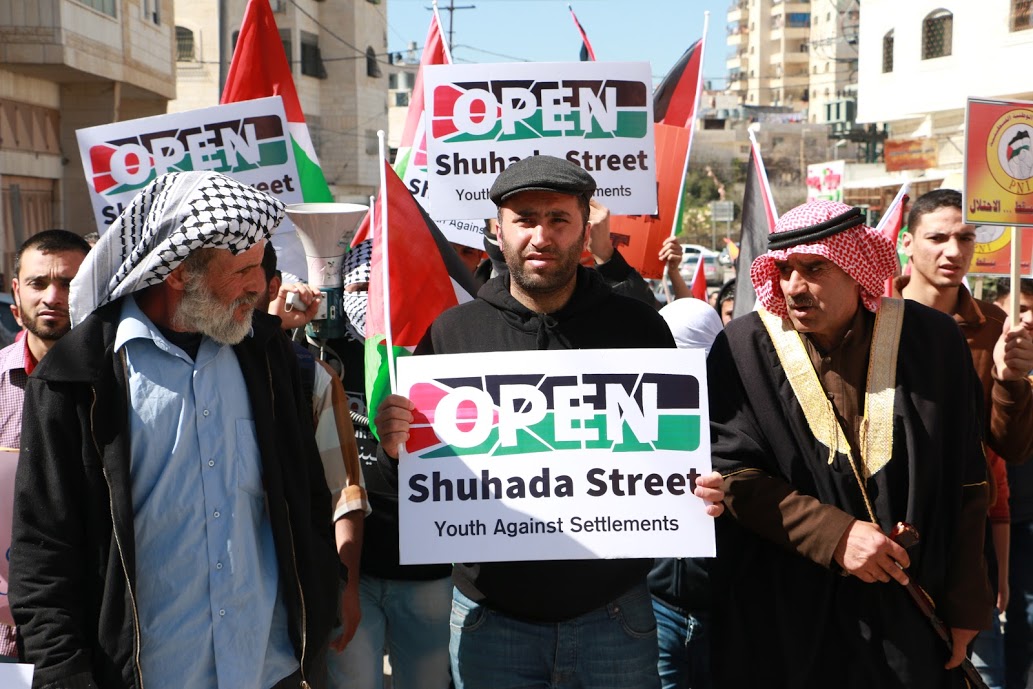 Youth Against Settlements (YAS) is a Hebron-based nonviolent direct action group. Formed in 2008, it maintains a youth education and meeting center located in a building that was initially occupied first by the Israeli military and later by Israeli settlers. It was reclaimed for Palestinian use through a nonviolent direct action and legal campaign. The center is used to empower and educate Palestinians, especially youth, to stand firm and use nonviolent action, media, and advocacy work to resist Israel’s system of occupation, restriction, and separation in Hebron. YAS encourages the population of Hebron, especially in the old city area, to remain in their city of Hebron, despite the hardships and violence they face from settlers and military occupation. YAS leads an annual Open Shuhada Street campaign, which is implemented both in Palestine and internationally. YAS is also engaged in international advocacy through the United Nations (U.N.) and other international institutions, including the United Nations Human Rights Council. YAS’s coordinator, Issa Amro, has been recognized by the European Union as a Human Rights Defender.   YAS encourages all to call and message your representatives. Tell them that you oppose the closure of Shuhada Street and system of separation and oppression in Hebron. Ask them to use their influence to pressure the Israeli government to reopen Shuhada Street and implement human rights for all in Hebron. In the United States, you can look up your elected officials at usa.gov/elected-officials.   You can find Youth Against Settlements on their website at http://www.yashebron.org/. Or find it on Facebook at https://www.facebook.com/media.yas/ or Twitter at https://twitter.com/YASHebron.

Hebron is one of the four holiest cities in both Judaism and Islam. It is the second largest city in the West Bank after East Jerusalem and used to be the commercial center for the southern West Bank. Since shortly after the Israeli military occupation of the West Bank in 1967, Hebron has seen the building of Israeli settlements. Settlement building in Hebron and throughout the West Bank continues to expand today, despite being recognized as illegal under international law. In addition to the large settlements of Kiryat Arba and Givat Ha’avot, which are adjacent to Hebron, there are about 600 Israeli settlers living in the midst of Hebron’s old city. More than 1500 Israeli combat soldiers are stationed in and around Hebron, alongside the settlers to guard their security. The Israeli soldiers do not protect the Palestinian residents of Hebron, who are regularly attacked by Israeli settlers.   February 25, 2019 marks 25 years since the Baruch Goldstein massacre in 1994, when Israeli settler, Baruch Goldstein, murdered 29 Palestinians participating in Ramadan Friday prayers in the Ibrahimi Mosque in Hebron. In response to the massacre, the Israeli army introduced an apartheid system of separation in Hebron, including the closure of Shuhada Street to Palestinians, effectively creating a ghost town. Freedom of movement in Hebron’s old city is severely restricted for Palestinians. They are forced to undertake long detours, are barricaded inside their homes on Shuhada Street, and can only get in and out of their homes through the backdoors or rooftops. Shuhada street is vital to Palestinian communal and commercial life. It was the center of the old city’s commercial district before Israeli settlement projects and military rule forced its closure. To this day, the street remains almost entirely closed to Palestinians, while Israeli settlers move freely. The closure of Shuhada Street is a symbol of Israel’s wider apartheid policy of separation.

Zleikha Almohtaseb’s Story   Zleikha is a teacher who lives on Shuhada Street in the Old City inside the H2 area of Hebron.   She moved into her house over 8 years ago. Her front door, which leads out onto Shuhada Street, is welded shut. Like all Palestinians in the city she is not allowed to walk up or down Shuhada ‘Apartheid’ Street.   Shuhada Street has been closed to Palestinians since the attacks at the Ibrahimi mosque in 1994. It used to be one of the central economic and cultural streets in the city. It still houses many Palestinian families who must use long, convoluted routes to get to and from their homes. They cannot use their front doors because they lead onto Shuhada Street.   Zleikha told YAS about her and her elderly mother’s experiences with harassment and attacks during a short spell when the road was reopened to Palestinian residents of the street.   In 2006 YAS took the issue of Shuhada Street with its apartheid functioning to Israeli court. They won the case and the judge ordered that residents of the road should be able to freely use their front door to enter the street. A year later residents were issued with permits and were promised security protection by the Israeli military, because they knew their presence would be met with hostile reactions from the settlers who use the road on a daily basis.   However, the promises of security and the assurances of safety for Palestinians were not kept. The first time that Zleikha used the street was in the presence of an international group. She faced hostility from settlers; they tried to block Palestinians from walking on the street and they tried to start fights. Soldiers frequently detained Zleikha between 10 minutes to 1 hour to ‘check’ her permit.   In 2008, once again in the company of internationals, Zleikha was blocked by a settler. She tried to continue giving the tourists a tour of the apartheid system in place in the city, but she was stopped and blocked by the notorious and extremist settler Anat Cohen who called the police. Soldiers and police officers attended the scene quickly and made Zleikha stand at a distance from the international group. She was made to show her permit to be on the street and was told that it did not apply on this stretch of Shuhada Street. Soldiers forced her into a military jeep and drove her back to her house. They said they would not arrest her on this occasion due to her ‘good conduct.’   Not only was Zleikha frequently harassed and denied the right of passage by settlers and soldiers, but the military also failed to keep their promise to protect the Palestinian residents on the street. On one occasion, Zleikha’s elderly mother was kicked and verbally abused by a group of settlers. The military responded by sending her out of the area.   In June 2012 Zleikha’s front door was welded shut. She was not informed. It was a response to an action by Palestinian and international women who were working with locals to reopen Shuhada Street. Protesters had entered the street through Zleikha’s front door. Then doors were broken down in the neighbourhood, including the entrance to Zleikha’s kindergarten. Settlers claimed that Zleikha’s visiting brother was the house owner, and he was then arrested and detained overnight despite his health problems. The army then took action to ensure that the door could never be opened again and welded it shut.   Zleikha was able to use Shuhada Street for a total of one year between 2007-2009. She was given a 3 month permit that had to be renewed at the end of this time. There was up to 4 months between each renewal, and in 2009 the police refused to renew the permit again, citing security reasons.   Originally published by Youth Against Settlements at http://hyas.ps/hebron/personal-stories/zleikha-almohtaseb/.

From “Nabi Saleh is Where I Lost My Zionism” by Lisa Goldman   The Tamimi family has been demonstrating every Friday for about a decade, protesting the takeover of Nabi Saleh’s natural water spring by nearby settlers. As Bassem Tamimi once explained to me, in quite fluent Hebrew, the villagers said nothing when the army built the settlement of Halamish (originally Neve Tzuf) on their land. But when the settlers confiscated their spring, and the army then prevented the Tamimis from accessing it, Bassem and his extended family decided to draw a red line. Every week they gather at the top of the hill inside their village, carrying flags and banners, and walk toward the road that separates them from the spring. The goal is simply to cross the road and walk to the spring. And every week, the army deploys security forces inside and around the village to stop the protesters from reaching their destination. The way it works is this: at around noon, military vehicles enter the village and park at the bottom of its bisecting road. Security forces, heavily armed and wearing combat gear, descend from the vehicles, load their weapons, and wait. Sometimes they start shooting as soon as the demonstration begins, and sometimes they wait for a teenager to throw a stone in their direction before opening fire. As Ben Ehrenreich notes in his New York Times Magazine article about Nabi Saleh, the army spokesperson told him there has never been a single case of a soldier being injured by a stone at those demonstrations. But over the past few years, soldiers have injured and killed several demonstrators.   In one now notorious incident, a soldier cracked open the rear door of his armored jeep as it was on its way out of the village, and shot a tear gas canister directly into the face of Ahed’s 21-year-old cousin Mustafa, killing him. No-one was ever censured or prosecuted for that act of murder.   From “Nabi Saleh is Where I Lost My Zionism” by Lisa Goldman, a founding editor and contributing writer for +972 Magazine, a Tel Aviv-based digital-native news and commentary site. Published at https://972mag.com/nabi-saleh-is-where-i-lost-my-zionism/131818/.