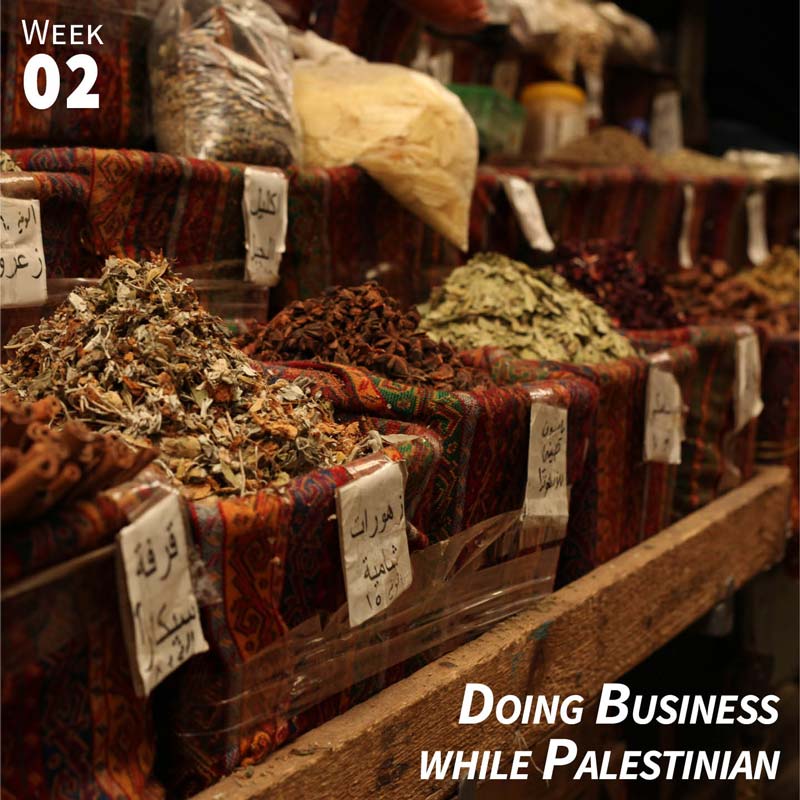 We begin our year by looking ahead to Martin Luther King Jr. Day, observed the third Monday of each year, and remembering his immortal words “Injustice anywhere is a threat to justice everywhere.” It is a powerful reminder of why the occupation of Palestine should matter to everyone, regardless of where they live around the globe.

The first injustice we address is the ability of Palestinians to participate in the business and labor market. If you exchange presents around the end of the year, you might be reading this on that new iPad you’ve been wanting. But take a moment and consider where the gifts you’re given and the products you buy come from, and all of the agreements and partnerships that must occur for goods to move around the world in the 21st century. And then read about how the occupation of Palestine makes it difficult for all Palestinian businesses, from family-owned farms to the latest idea of an entrepreneur, to participate in that global marketplace. Here’s what you need to know about running a business while Palestinian and what you can do so that together we can rise up.

To participate in the global market, governments must allow their citizens to control resources and make decisions about what to produce. The government then needs to ensure that the goods produced by its citizens can be exported and sold abroad. On both these points, Palestinians face substantial challenges, for it is not their government, the Palestinian Authority, that decides how many of the resources of the land are used, nor is it their government that can control how goods are exported, and what trade deals are made around the country.

For example, Palestine has signed favorable trade agreements with the European Union, including duty-free access to the European marketplace for industrial goods, the phase out of tariffs of EU goods to Palestine, and the liberalization of agricultural and fish products. However, according to the European Commission,  “There are a number of constraints and limitations resulting from the ongoing Israeli-Palestinian conflict and the continuing occupation, including settlement activity, restrictions to movement as a result of the closure policy and the separation barrier.”

Some of these restraints include:

A paper from the United Nations Conference on Trade and Development concludes, “As a result of Israeli procedures, Palestinian shippers, who are subjected to discriminatory treatment, bear additional direct and indirect costs; leading to higher transaction costs and thus the final cost of production and distribution … Ultimately, the competitiveness of Palestinian exportable and importable goods in the domestic as well as the global marketplace erodes while the cost of imported inputs and consumer goods escalates.”

As onerous and devastating as these restrictions are on business in the West Bank, the situation in Gaza is even worse. Human Rights Watch reports that “Outgoing goods (during the first 10 months of 2018), mostly destined for the West Bank and Israel, averaged 201 truckloads per month, less than 20 percent of the average 1,064 truckloads per month prior to the June 2007 tightening of the closure.” So much of what Gaza can, or could, produce is not allowed to be exported. Furthermore, the import of building supplies is severely limited by Israel, who argues that such materials would be appropriated by Hamas for military purposes. Combined with the critical deficits to the electrical and water systems in Gaza, building and maintaining a business, particularly one that could compete in a global marketplace, is close to impossible. To read more about how the blockade of Gaza stifles Gazan farmers and fishermen, see Week 38: Blockade of Gaza.

Clearly, Israel needs to reevaluate its treatment of Palestine in light of both international law and humanitarian concerns and abide by what they say. By letting business flourish in both the West Bank and Gaza, Israel would remove obstacles in the way of solving the employment and poverty problems in both while potentially creating new markets for Israeli goods and allowing cheaper and more numerous imports for Israeli consumers. Egypt is complicit as well by going along with Israeli limitations on imports to Gaza. Knowing the situation in Gaza, Egypt should act on its own to improve the flow of goods in and out of Gaza. In the meantime, there is a great need for organizations and individuals to advocate for Palestinian goods and businesses using the tools available to us.

Through the week, Kumi Now will publish essays and stories from different organizations further exploring this topic and highlighting what they are doing to address the ability of Palestinians in the occupied territory to make a living.

When one thinks of Palestinian products, olive oil is the most obvious (see Week 11: Olive Trees for more on olive production), and makes up, along with tropical fruits, the majority of the rather meager 16 million euros exported to the EU in 2017.

But possibly the most well-known success story is Taybeh Beer. The Taybeh brewery is a perfect example of how tenuous even a Palestinian success story can be. A profile of Taybeh Brewing Company by Deutsche Welle (DW) observes that the brewery is internationally successful: “Sixty percent of the beer is sold in the West Bank, 30 percent goes to Israel, and the remaining ten percent is exported to Spain, Britain, Chile, Japan, Germany and the United States, where Khoury learned the business.”

But despite this success, the threat of Israel always looms large:

Today, an end to the occupation seems far off. And Taybeh needs access to water from a nearby spring that has fallen under the control of Israel. Hops, malt, and yeast are imported from Europe.

The Israeli authorities can shut off that water supply at any time, Khoury said; they have done so more than once in the past. “We can’t work without water,” he said. The wall that Israel has built and its checkpoints in the West Bank are barriers to his business. “To this day, we can only export our beer abroad via Israel,” he said, adding that official product checks often take days.

And yet, Taybeh is able to succeed because it sells a premium product to an audience willing to pay premium prices. It is also a product that can sit for days for a product check and not lose its value. Palestinian farmers  and fishermen don’t have these luxuries and are instead constantly disadvantaged.

The keffiyeh is a symbol of Palestinian resistance and solidarity. And yet, for five decades the only producer of keffiyehs in Palestine has been Hirbawi. Due to the complications posed by checkpoints and other Israeli restrictions and the production of cheaper keffiyehs made outside of Palestine, Palestinian-made keffiyehs are at risk of disappearing. Order your keffiyeh today from Hirbawi in Hebron. For more information visit: ​https://www.hirbawi.ps/.

Don’t want a keffiyeh? Don’t want a keffiyeh? You can buy olive oil and other goods from Zaytoun, find your local distributor of Taybeh beer (or encourage a local shop to carry it), or buy just about anything from Shop Palestine, which is run by the Middle East Children’s Alliance. And through the week we will share other ways to buy Palestinian-made goods. So be sure to check our social media accounts and website.

Literature: “Entrepreneurship in Gaza: a glimmer of hope but a high risk of failure“ by Al-Orjwan Shurrab

New businesses in Gaza face all of the usual complications that bedevil startups everywhere, ranging from personality conflicts among team members to lack of sufficient expertise in the field of focus.

“It is critical that team members are entrepreneurial—meaning they have or can develop the knowledge needed to identify and exploit opportunities and are willing to take some risks,” explains Seyam. “They also must be patient and adventurous.”

Moamin Abu Oaida, community development and engagement manager for GSG [Gaza Sky Geeks], adds: “Each team must have both expertise and practical experience in the target field among its members.”

However, even when such ideal people lineups exist, when they live in a place like Gaza, where both travel and trade are tightly restricted, the challenges are far greater.

“Entrepreneurial projects conceived in Gaza are more likely to fail than in most other places,” says Omar Altabatiby, outreach officer for PICTI [Palestine Information and Communications Technology Incubator]. “Their problem is delivery and being able to compete with a fair price when their own cost of doing business is so high relative to their incomes.”

Even when seed money is secured from a donor, such financing often is delayed or suspended due to political or “security” reasons—forcing the projects to come to an abrupt halt.

One aspect of the siege, however, with which these incubators can help is loosening the mental restraints on youths’ minds and creativity. “Most of the young generation have never traveled, even met a ‘foreigner,’” notes Seyam. “So, they don’t even know how to think ‘big.’”

In fact, says Basel Qandeel, an engineer and executive manager of BTI [Business and Technology Incubator], failure itself is stigmatized, making youth afraid to take risks when their families often must struggle to put enough food on the table. “Their psychological health affects whatever they do negatively.”

From “Entrepreneurship in Gaza: a glimmer of hope but a high risk of failure” by Al-Orjwan Shurrab, published by We Are Not Numbers.