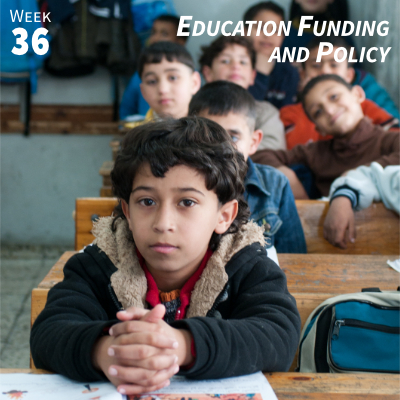 It’s that time of year! Students across Palestine and Israel, and around the northern hemisphere, have headed, or are about to head, back to school. Sadly, Palestinian citizens of Israel face discrimination when it comes to education funding from the State of Israel. Jewish, Christian, Muslim or Druze: all deserve a quality education and equal support from the state. Here’s what you need to know about education funding and policy in Israel and Palestine, and what you can do so that, together, we can pressure Israel to end its unequal treatment of its citizens’ education as we rise up.

In April of 2019, Adalah reported that “Israeli authorities are requiring all high school students—Jewish and Arab—to pass an online government propaganda course that promotes racist ideology before they are allowed to participate in overseas class trips.” According to Adalah, “One question asks, for example: ‘How do Palestinian organizations use digital social networks?’ The correct answer of four possible choices is ‘encouraging violence.’ Another question asks students to identify the origins of modern anti-Semitism. The exam’s correct answer is ‘Muslim organizations’ and the BDS movement.”

This is one example of anti-Palestinian bias in the Israeli school system and a reminder the road to peace requires participants on both sides be educated in a truthful manner and taught to be critical, caring thinkers.

The Palestinian Authority is equally guilty of bias within the school curriculum. For example, in 1999, Nadia Nasr wrote that a review of the Palestinian curriculum found “it is gender-biased and reinforces the traditional roles of females and males” while only hinting at the issues regarding the teaching of Israel.

Researchers at Bethlehem University, Tel Aviv University, and Harvard worked to measure the bias level of each curriculum and in 2013 published the report “Victims of Our Own Narratives? Portrayal of the ‘Other’ in Israeli and Palestinian School Books.” They found significant issues on both sides, including:

However, bias in the curriculum is just a portion of the education puzzle, and minority students within Israel are often faced with a system that ignores or is hostile to their own backgrounds and further discriminates based on funding. Mona Bieling summarizes in her analysis of the Israeli school system that “it is obvious that the state interferes in various ways with the Arab education sector in order to sow divisions among the Arab Palestinian citizens of Israel … Therefore, the school system, as it currently exists, clearly caters to the best interests of the state instead of the students.”

Pilgrims of Ibillin wrote about their own experience with this system in their entry for Kumi Now, in which they wrote, in part:

“Many international friends don’t realize that Israel runs separate and unequal school systems for Jewish Israelis and for its Palestinian citizens. All Israeli schools—Jewish and Arab—receive federal tax support, but the government (public) schools for Israel’s Christians, Muslims, and Druze receive a much lower subsidy than Jewish schools and are generally of inferior quality. Therefore, private Christian schools, some pre-dating the formation of the State of Israel by decades, offer the best education available to Arab students in Israel.

“Mar Elias is among the best (and largest) of these Christian schools. The Mar Elias Schools in Ibillin today include 2,700 students (ages 3 through 18) from 45 different villages in the Galilee and several communities near Jerusalem and in the Negev. Two-thirds of the students are Muslim, most of the rest are Christian, and a small number are Druze. Mar Elias teachers include Christians, Muslims, Jews, and Druze. More than 50% of the students are girls. This school’s diversity and commitment to equal treatment for all make it stand out even among other religious schools for Palestinians within Israel.

“Although Christian schools like Mar Elias are private, they are still required to follow the curriculum set by Israel’s Ministry of Education. Graduating seniors need to achieve high grades on the required Israeli matriculation (Bagrut) exams to qualify for an Israeli high school diploma. Almost 90% of Mar Elias graduates achieve this goal-a far higher percentage than the general population in either Jewish or Arab government (public) schools.

“Almost all Mar Elias high school graduates also go on to study in universities in Israel and all over the world. They not only excel academically, but Mar Elias graduates stand out as leaders and innovators in their professions and communities.

“A challenging issue for the Mar Elias Educational Institutions is that Israel only supports 29% of the funding of the private religious schools run by Christians or Muslims. Government subsidies to non-Jewish religious schools have been reduced drastically over the last decade, to the point that many Christian schools are struggling to survive, even though they charge tuition. In September 2015 all 47 of Israel’s Christian Schools united in a month-long strike, delaying the start of the school year, to call attention to their dire financial situation and to pressure Israel’s government to give equal treatment to ALL students within Israel. The strike ended with only modest success—with promises of a one-time catch-up payment from the government that has yet to be fulfilled.”

Of course, not all students have access to a private or religious school. And in East Jerusalem in particular Israel has failed to provide the classrooms or resources necessary for education of Palestinian children. In 2011 “the High Court of Justice ruled in a petition filed by the Association for Civil Rights in Israel (ACRI) that the state had violated the right of East Jerusalem students to free public education.” Given five years to remedy the problem, the ACRI at the end of that term found “the gap remains large and has even grown as a result of the natural increase in the number of students over the years.”

In 2018 Ir Amim found a shortage of 2,476 classrooms in East Jerusalem. Israel announced plans to invest in closing the gap in 2018, but Ir Amim found that 43.4% of that funding was conditional on schools adopting the Israeli curriculum. Since most schools would not do so only 7% of East Jerusalem students would benefit from that funding. Ir Amim concluded that even the municipality’s stated plan “for the three educational sectors in Jerusalem will only widen the disparities between the sectors. At the end of 2022, the shortage of classrooms in Jerusalem will be located entirely in the Palestinian sector.” Furthermore, 15 to 20% of East Jerusalem children aren’t recognized by Israel and instead attend private schools or schools run by the UNRWA. Instead of working to fix the glaring gaps in the system, Israel has recently threatened to close and replace UNRWA schools with schools run by the Israeli Ministry of Education pushing the Israeli curriculum.

A fair and effective education is what every parent and government wants for its children, but such an education is often hindered by funding, politics, fear, and the shortcomings of the previous generations. But the ideal of such an education, as embodied in the Universal Declaration of Human Rights (Article 26), the Declaration on the Rights of Indigenous Peoples (Articles 14 and 15), and the Millennium Development Goals (Goal 2), should remain a guiding light for every parent, educator, and government.

With this in mind, throughout the week, Kumi Now will publish stories highlighting the many schools, organizations, and individuals working to bring such an education to all Palestinian and Israeli students.

Story: Lessons from the Strike

In September of 2015, during the Christian School Strike, most families of Mar Elias students strongly supported their school and teachers, students, and family members attended rallies and prayer events in both Galilee and Jerusalem. However, some students’ families were simply angry that their students had to miss a month of classes, and they removed their students from Mar Elias and enrolled them instead in local government schools.

The strike had some surprising consequences even though it did not achieve the full financial backing and recognition that schools like Mar Elias had hoped for. One result was that teachers, students, and their families became much more aware of the value of a Mar Elias education, both in academics and in teaching moral values. They learned to articulate what makes their school unique and became strong proponents of religious schools in general and Mar Elias in particular. Teachers committed to teaching six days a week for the rest of the school year in order to help students make up the lost time-even though it meant extra work for no more pay.

Another unexpected consequence of the strike was that students and teachers informally started study groups using social networks. They carried on spirited online discussions of what was happening and why.

English language students read essays provided by teachers and discussed them through chat rooms. And a small group of enterprising computer programming students used the strike month to dream up an entry for an international hack-a-thon (programming competition). Their entry ended up taking first prize in all Israel and qualified them to compete at an international level among the best 37 national hack-a-thon winners. The Mar Elias group took second place in the world that year!
A final unexpected consequence of the strike was that some families who had withdrawn their students from Mar Elias because of the strike returned, saying that even though their students didn’t miss the strike time, the education they got elsewhere was not as good.

Or send a book about justice (any book would do, but you could send Blood Brothers by Elias Chacour) to the Ministry of Education and suggest in a note in the cover, “Since you find it difficult to do the right thing and fund Palestinian schools properly, I thought you should read this book. You can then add it to a school library somewhere in Israel. It is needed.”

Take your school/library photos and photos of your books and inscriptions and post them to social media along with your messages. Include a link to this page of the Kumi Now website along with the hashtags #EducationFunding, #KumiNow, and #Kumi1.

You who live in the United States, if you are pro-Israel, on behalf of the Palestinian children I call unto you: give further friendship to Israel. They need your friendship. But stop interpreting that friendship as an automatic antipathy against me, the Palestinian who is paying the bill for what others have done against my beloved Jewish brothers and sisters in the Holocaust and Auschwitz and elsewhere.

And if you have been enlightened enough to take the side of the Palestinians—oh, bless your hearts—take our sides, because for once you will be on the right side, right? But if taking our side would mean to become one-sided against my Jewish brothers and sisters, back up. We do not need such friendship. We need one more common friend. We do not need one more enemy, for God’s sake.