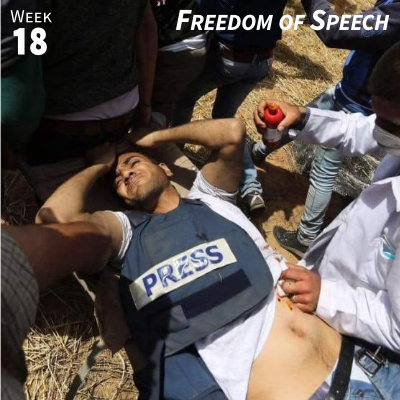 As we celebrate World Press Freedom Day on May 3, we want the world to know that Palestinian journalists face regular threats of censorship and violence. Frustratingly, this censorship has been aided and abetted by tech giants such as Facebook, Twitter, YouTube, and Zoom. The Palestinian Center for Development and Freedoms (MADA) is working in support of freedom of speech and a free and independent press in Palestine. Here’s what you need to know and what you can do so that together we can rise up.

According to Reporters Without Borders (RSF), Israel ranked 88th in the world in its World Press Freedom Rankings of 2019 while Palestine ranks 137. While Freedom House downgraded Israel’s press freedoms from ‘Free’ to ‘Partly Free’ in 2013. RSF concludes, “The Israel Defense Forces often violate the rights of Palestinian journalists” and targets them with violence. It also calls out Israel for its use of administrative detention (see Week 16) against journalists. In 2016, Palestinian journalist Mohammed al-Qiq, brought attention to Israel’s use of administrative detention, particularly against journalists, when he underwent a 94 day hunger strike before securing his release. He was released, rearrested 8 months later, and staged a second, 33 day hunger strike.

Israel’s treatment of journalists has not improved, and RSF points out that, “The Israeli parliament has begun considering a proposed amendment under which recording or disseminating photos or videos of serving Israeli soldiers with the demonstrable aim of ‘undermining the spirit of IDF soldiers and residents of Israel’ or ‘intending to harm state security’ would be punishable by 5 to 10 years in prison.” And that “Because of self-censorship, there is little or no coverage of the reality of life in the Palestinian territories. Foreign freelancers often have difficulties in obtaining or renewing accreditation.”

The ranking in Palestine is even lower as journalists in the occupied territory face not only Israeli suppression and harassment, but also the Palestinian Authority, which has made a habit of blocking opposition media, and sites such as Facebook and Twitter, which have deleted the content or suspended the accounts of Palestinian journalists and media outlets, always on the basis that such reporting “incites violence.”

Critical to documenting the efforts to censor and punish Palestinian journalists is the Palestinian Center for Development & Media Freedoms (MADA). In their first entry for Kumi Now, MADA documented Israeli violence towards journalists in the first half of 2018. MADA reports that this violence has continued:

Since March 30, 2018, Israel has continued to target dozens of Palestinian journalists with live ammunition and tear gas bombs with unknown chemical components. And two journalists were killed in the Gaza Strip while located hundreds of meters away from the border fence.

Moreover, Israel launched a new campaign targeting Palestinian journalists and media outlets in the West Bank. That campaign included the ban of the Al-Quds TV channel, the arrest of some of its staff, and a prohibition against other media service provider companies to engage in any work with it. Israel has moved to a whole new level by targeting service provider companies, seeking to ensure the complete silence of the Palestinian media and hinder of the access of Palestinians and internationals to information on the conflict by targeting the media infrastructure.

We at MADA are concerned over the systematic targeting and intimidation, and threatening of journalists by Israeli state officials, settlers, and Occupation forces. This deliberate targeting of journalists, not only physically but also psychologically, increases the practice of self-censorship among journalists, and may force journalists to abandon their careers.

The targeting of Palestinian media is now a systematic policy practiced by Israel that involves, but is not limited to, the following:

• Unofficial agreements or understandings with Facebook on removing posts and blocking news pages and accounts by Palestinians—a discriminatory measure and a clear breach of the right to freedom of expression and opinion on social media.

• Drafting a law to prevent civilians and journalists from covering events  when soldiers are performing their duties. The clear intent of the law is to suppress the witness of Israeli violations against Palestinians.

• Direct and systematic attacks against journalists and media outlets inside the occupied Palestinian territory.

• Prohibiting media service provider companies and shutting them down with military orders, such as what happened with Transmedia, Pal-media, and Ramsat, and more recently with Al-Bashir ProMedia Productions.

• Confiscation of equipment including cameras, mobiles, and laptops and destroying broadcast equipment and other devices that costs thousands of dollars while providing no compensation.

• Mass prevention of the coverage of several events, with IOF forces banning and preventing Palestinian Journalists from accessing certain areas inside the West Bank.

• Banning from travel and restricting the right to movement, even across the West Bank, to many journalists as discriminatory measure for their coverage.

• The recent attacks against Palestinian Journalists in Gaza Strip, killing two journalists and injuring hundreds with live ammunition and directly targeting them with gas bombs.

Covering all of these attacks, MADA documented 330 attacks on journalists in the first half of 2019. These attacks increased in the following month. Clearly there is no end in sight. While MADA continues to document crimes against journalists, it is important to remember that legal protection for journalists in war zones is well written into international law. While the Universal Declaration of Human Rights includes the “freedom of opinion and expression … and to seek, receive and impart information and ideas through any media and regardless of frontiers.”

While the Israeli courts have made it clear that freedom of expression and the press are inherent in Israeli law, the truth is that, once again, there is a two-tiered system: Israeli reporters and citizens are free to express opinions and report on internal Israeli issues, but Palestinian journalists, and indeed international journalists, find a different set of rules and roadblocks. Nor can we forget efforts by the Palestinian Authority to ban and avoid negative coverage.

Through the week, Kumi Now will share articles and stories highlight the organizations and brave reporters and citizen journalists making sure that every story is told and that the truth will come out.

Essay, and following story, contributed by MADA. Updated for the second edition of Kumi Now.

On May 14, 2018, the freelance photographer Yasmin Akram Al-Na’ouq (24 years old), was shot with a bullet in her back and hit with a gas bomb while she was covering the return march events, to the east of Jabalia/Gaza Strip.

Based on the investigations of MADA field researcher, Al-Na’ouq was wearing her press uniform, and had approached to within roughly 200 meters of the border fence to cover the events of the return march. But as she continued to approach, she was unaware that she was about 50 meters away, while shooting dozens of demonstrators in that area. In the meantime, the soldiers stationed near the border fence fired a brutal barrage of live bullets. One of the bullets hit her in the back while she was shooting video with a tablet. The tablet fell from her hand and broke. She had hardly asked for help when a small drone fired about 30 gas bombs, two of which hit her in the back: one directly in the back and the other towards her side.

Al-Na’ouq reported that she lost consciousness and did not wake up until she reached the field medical point in the eastern part of Jabalia and heard the doctor saying that she needed to be taken to Al-Awda Hospital. She soon lost consciousness and did not regain it until late at night in Al-Awda Hospital, where she found herself on the bed with her family surrounding her.

Al-Na’ouq was discharged from the hospital at 3:30 PM on the following day, May 15, under the doctor’s warning to avoid movement for fear that the injury in her back may be aggravated. The doctor also asked her to take a CT Scan for fear that there might be laceration in the bones. However it took until June 7th to get the scan given the overcrowding at Al-Shifa Hospital, overwhelmed as it was with those wounded in the peaceful return marches. Yasmin Al-Na’ouq stated that she is still suffering from difficulties breathing and headaches due to gas inhalation, exhaustion, and back pain.

When dissent and the truth are repressed, the best response is to shout your dissent louder and share the truth widely. Facebook, Twitter, and YouTube have cooperated in allowing the Israeli government to monitor and censor online Palestinian content. This censorship has limited the ability of human rights activists and organizations to speak openly and legally under international law. And, of course, there is no similar agreement allowing Palestine to monitor and censor Israeli individuals and organizations.

As such, pledge to share at least one piece of well-written, eye-opening Palestinian reporting, or one of the articles/reports listed in the Additional Resources section of this entry on the website, each day this week. If you are unsure as to which news organizations routinely produce legitimate journalism from Palestinian journalists, you can start with:

When you share these articles across your social networks include a link to this page of the Kumi Now website along with the hashtags #KumiNow and #Kumi18.

Literature: Article 19 of the Universal Declaration of Human Rights

Everyone has the right to freedom of opinion and expression; this right includes freedom to hold opinions without interference and to seek, receive and impart information and ideas through any media and regardless of frontiers.

Article 19 of the Universal Declaration of Human Rights

We have a YouTube playlist with videos about Freedom of Speech.