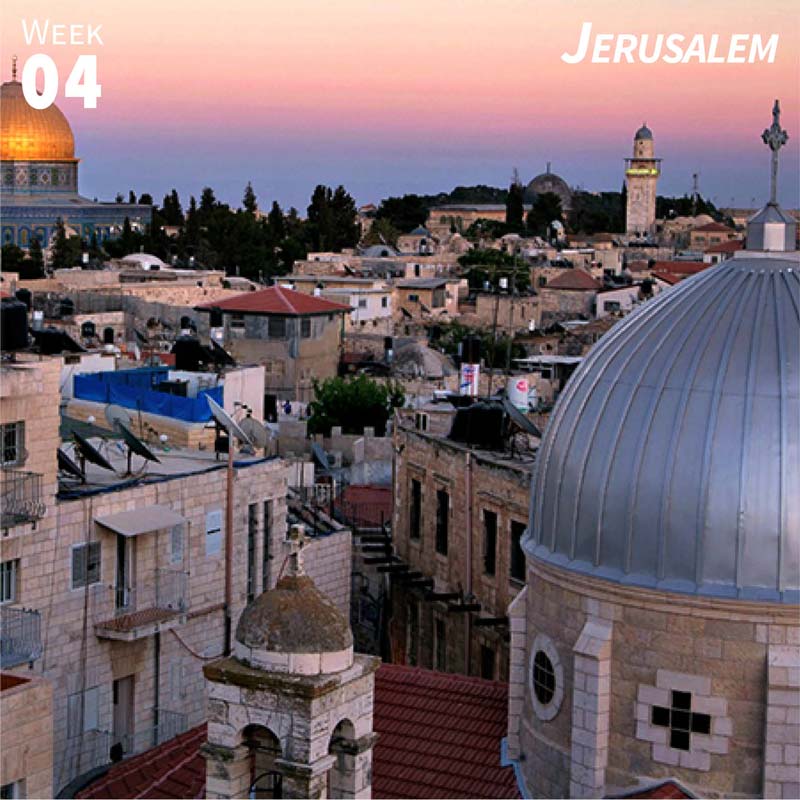 Once regarded as the center of the world, an epicenter of Christianity, Islam, and Judaism, a symbol of the clashes of civilizations, demolished and rebuilt on at least eighteen occasions, conquered and reconquered more than thirty-seven times: truly, Jerusalem is a city of the world. The Israeli military occupied Jerusalem in 1967. Yet Israel started its efforts to claim Jerusalem as its alone years prior, regardless of the wishes of the United Nations and the claims of Palestinians, when, on January 23, 1950, the Knesset declared Jerusalem the capital of Israel. Here’s what you need to know about Jerusalem and what you can do so that together we can rise up.

In 1947, as part of Resolution 181 (The Partition Plan), the United Nations declared that Jerusalem would be an internationally-administered corpus separatum between the Jewish and Arab states. However, David Ben-Gurion argued that Jerusalem was “Israel’s eternal capital” and the Knesset soon backed his proclamation.

Israel was unable to truly claim all of Jerusalem as its capital until it occupied the full city in 1967. Since the annexation of East Jerusalem, the primary goal of the government of Israel has been to create a demographic and geographic situation in Jerusalem that will thwart any future attempt to challenge Israeli sovereignty over the city. To achieve this goal, the government has been taking actions to increase the number of Jews in East Jerusalem, and reduce the number of Palestinians, living in the city. Various methods have been used to achieve this goal:

Physically isolating East Jerusalem from the rest of the West Bank, in part by building the separation barrier

Discriminating in land expropriation, planning, and building, as well as demolition of houses

Revoking residency and social benefits of Palestinians who stay abroad for at least three years, or who are unable to prove that their center of life is in Jerusalem

Unfairly dividing the budget between the two parts of the city, with harmful effects on infrastructure and services in East Jerusalem

Jerusalem is a place that holds importance for so many, yet it has become a battleground. Nobody wants to see the destruction of this holy place; however, the situation now is the cause of much grief and anxiety for those who live here, and for those around the world.

And writing for Kumi Now, PASSIA points out how Israel violates international law noting, “While violations of international law and the commission of war crimes by the State of Israel are frequently mentioned in the context of the ongoing military occupation, people are often not fully aware of what this ‘international law’ actually refers to or where and why it is being violated.” To address this problem they published “International Law: Israeli Violations and Third Party Responsibility.”

The report surveys “the international law regulations currently being violated by Israel and Israel’s duties following from it, be it as a state party to treaties, as a subject of United Nations (U.N.) resolutions, or otherwise. It further stresses third states’ responsibility to enforce them and explains the Palestinian (and others) criticism of the international community for using aid and development to hide their inaction in facing up to Israel’s blatant human rights violations.”

Focusing on East Jerusalem, PASSIA concludes, “East Jerusalem is occupied territory, thus the Fourth Geneva Convention applies and Israel has no legitimate authority over it by virtue of having taken control of it militarily. The international community rejects Israel’s claim to both West and East Jerusalem as its ‘eternal undivided capital’ and has consistently denounced Israeli attempts to change the status of the city.”

While from a Christian perspective Sabeel notes that just as Mary and the disciples grieved over the death of Jesus, so people today grieve at the deep sickness of the place that Jesus called home. One of the many churches in Jerusalem is called Dominus Flevit in memory of the tears that Jesus shed over Jerusalem. Through the window of the church there is a spectacular view of the city that is so much in need of healing. We grieve as Jesus grieved, and we pray for the peace and tranquility of Jerusalem: the city must be shared.

It is time for Israel to start abiding by international law and listening to the voices of the those bringing to light the injustices of Zionist policies in Jerusalem. Let us rise together so as to change this reality. To do this, Kumi Now will publish essays and stories throughout the week from different organizations further exploring this topic and highlighting what is being done to reveal and oppose these violations in Jerusalem.

Adapted from “Station Thirteen” in Sabeel’s Contemporary Way of the Cross: A Liturgical Journey along the Palestinian Via Dolorosa and “Israeli Violations of International Law in East Jerusalem” by PASSIA.

Story: from “One Woman’s Story: A Testimony from June 1967” by Georgette Rizek

It was Monday morning on the 5th of June, 1967, when we felt something was wrong.… The schools started closing and my husband had to go and get the children from school. The Arab radios started giving updates on the movement of the army troops. It was a day of fear and terror. My mother, sister and I started filling sandbags to close the window of the basement and when my husband arrived we started moving mattresses, food and candles to the basement. We decided that we would not leave our houses. We were fooled when we thought we would come back to them in 1948, and we lost them forever. It took us 20 years to re-establish ourselves, our business and our residence. We could not afford to lose our houses again.…

On Thursday the Israeli army, who by that time was controlling all of Jerusalem, started announcing that people could come out of their homes. My husband and I decided to walk downtown from Beit Hanina to see what happened to our garage on the border between East and West Jerusalem. There were many people in the streets walking downtown. When we got to Shu’fat, we heard someone calling our names. It was our family doctor, Saliba Saeed. He took me aside and said: “Georgette, your husband should not see the garage right now … it is completely damaged and it will be too much for him to handle.”…

I walked about seven kilometers under the burning sun and finally got to the garage. The offices were demolished, all the furniture was broken, all the tools were stolen, and all the cars were damaged or had been stolen. There was blood all over the floor and walls. Children’s school bags were thrown all over the garage. Oil, from our stock of oil barrels, was seeping all the way to Damascus Gate. The account books and ledgers were all over the place and the cash register was broken into pieces. I stood there crying and crying.

This was the business that my husband worked all his life to establish and it was all gone now. This was the business that has been supporting many families, and it was gone now. For the second time in my life, I could not bear the pain of starting all over again. It was too much … Oh God, it was too much. I started thinking about how to break the news to my husband, so he would not have a heart attack when he saw it.…

We would like you to reach out to those in power about Israel’s flaunting of international law and norms. This is particularly important right now with inequitable distribution of COVID-19 vaccines, and we suggest you lead with this urgent issue and put it in the context of Israel’s ongoing action.

We urge you to reach out to local, national, and international elected officials, agency leaders, and influential people. Get creative in thinking about who might be interested and bring new interest to the cause. Here are some suggestions you can draw on in crafting your letters, emails, tweets, posts, and Instagrams:

You might start with something like: “Israel continues to ignore its responsibilities as an occupying power under international law as it refuses to assist Palestine in the distribution of COVID-19 vaccines, proving once again that Israel views the Palestinian lives under its control as less important than the lives of illegal Jewish settlers it allows to live in the West Bank, but who have access to COVID-19 vaccinations.

Here is a list of international laws Israel is violating. Include one or two in your communications:

a) Treaties Israel has ratified or acceded to and are therefore binding:

b) Customary Law and General Principles:

Language you can use to hold Israel accountable:

You can send these letters via regular mail or email, or get creative, delivering letters in person, or communicating via Twitter, Facebook, Instagram, etc. Share your letters publicly and include a link to this page of the Kumi Now website along with the hashtags #KumiNow and #Kumi4.

Our heavenly Creator God, in this city your beloved son was crucified and raised from the dead. Make us worthy of its heavenly message. We beseech you Lord, who knows what the people of this holy city have suffered, and are suffering: up-rootedness, lostness, the pain of being torn apart in separation, the pain of unsettlement, the pain of death.

We beseech you Lord, to give this holy place Peace.

We beseech you Lord, to give the people of this city calm in their souls, and courage in their hearts. Strengthen, O God, the hearts of those who work to bring Justice. Bless their efforts and make them succeed over the powers of evil, and support them with your Holy Spirit.

Inspire our leaders, O Lord, to achieve a just solution to all the problems of this city so that Jerusalem—the city of peace—will have everlasting peace for all its people. Help us God, as we pass through such difficult trials, that we may grow to know your truth, that we may witness to you, to our savior, by our lives. May the way of the cross be the one we choose for ourselves, that each will carry their own cross to follow you, Shepherd of our souls, teacher, crucified and raised from the dead.

“As he [Jesus] came near to the city, he wept over it, saying ‘If you, even you, had recognized on this day the things that make for peace! But now they are hidden from your eyes.’” (Luke 19:41–42)

Published under “Station Thirteen” in Sabeel’s Contemporary Way of the Cross: A Liturgical Journey along the Palestinian Via Dolorosa.