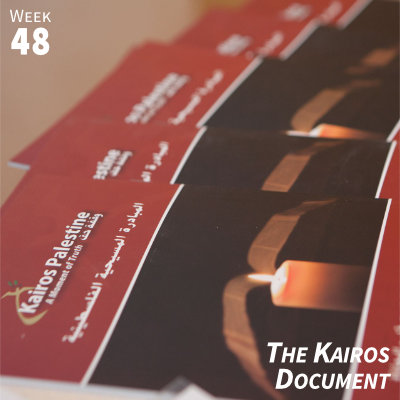 In 1985, theologians around Soweto, South Africa issued the first Kairos Document. Twenty-four years later, theologians in Palestine issued a like-minded document. This week, as the world observes International Day of Solidarity with the Palestinian People on November 29, the Kumi Now community is focusing on spreading the message of the Kairos Document, bringing Christians and non-Christians together to stand for justice and peace everywhere. Here’s what you need to know and what you can do so that together we can rise up.

In the midst of apartheid, it was difficult to see a future where apartheid was no more. Yet, in 1985, forward-thinking South African theologians came together to issue the Kairos Document. Its goal was to look critically at the misuse of Christian theology used to justify apartheid, and by doing so then unite Christians to action in order to challenge apartheid. This remarkable example of liberation theology and introspection was a driving force in the Christian reaction to apartheid, and has served as a model for other movements around the world.

Thus, during the 2008–9 assault on Gaza, as Christians were looking for a path towards peace, it was the South African document that led the way. The group was coordinated by Rifat Kassis and included 15 co-authors.

More than a decade has passed, but the document is as timely as ever, a result of both the vision of its authors and as a sad reminder that little has changed. The document describes a Palestine shackled by the same injustices described throughout this book: separation walls erected on Palestinian land and choking Palestinian neighborhoods, Israeli settlements encroaching on Palestinian villages and stealing natural resources, the daily humiliations of checkpoints, restrictions on Christian and Islamic religious liberty, refugee camps full of families denied return to their homes, thousands of prisoners languishing in Israeli jails, a slow seizure of Jerusalem, Israeli disregard for international law, and the drain of Christian emigration.

With this as reality, what are Palestinians, Israelis, and people around the world to do? You should, of course, read the document for yourself. But in outline form, the document calls for the following:

It begins with a theological framework grounded in the teachings of Jesus and the natural right of a people to a land. It builds on this framework by focusing on hope and love, situating the role of the church within this understanding. It then makes the call for resistance, stating, “Love is seeing the face of God in every human being … However, seeing the face of God in everyone does not mean accepting evil or aggression on their part. Rather, this love seeks to correct the evil and stop the aggression … The aggression against the Palestinian people which is the Israeli occupation, is an evil that must be resisted.”

And what sort of resistance does the document call for? “It is a resistance with love as its logic. It is thus a creative resistance for it must find human ways that engage the humanity of the enemy.” It is a resistance based on the example set by Christ: “We must resist evil but he taught us that we cannot resist evil with evil.” Thus, it is clearly a nonviolent resistance. It also calls “on individuals, companies, and states to engage in divestment and an economic and commercial boycott of everything produced by the occupation.”

Thank you for the document written by you, the descendants of Abraham, Isaac and Jacob, the descendants of Jesus Christ and whose ancestors were the first to receive his message. Yours is a proud history of keeping the faith in the Holy Land, and we salute you for doing that despite the most difficult situation into which you have been placed. From our perspective, we can see how you are being pressurized and forced out of your own land, and we urge you to continue to resist that with love, and to continue to show what our Lord Jesus Christ taught us. We are with you in our prayers and other forms of support, and wish to strengthen this support to you. We admire all that you are and that you do. Justice will come to the Holy Land, as it came to us here in the southernmost part of Africa.

We wish now formally to respond to your Kairos Document, so beautifully written and so full of grace, in the form of this letter, signed by South African Christian theologians, both academic and lay …

1. Apartheid: From our own experience of apartheid, we can clearly and without equivocation say that your situation is in essence the same as apartheid and in its practical manifestation even worse than South African apartheid.…

15. Blessings: We will continue to pray for the peace of Jerusalem, and we ask that you continue to pray for South Africa and also for the rest of Africa. May the blessing of the God who requires unconditional love, justice with mercy, who brings reconciliation, peace and an abundance of hope, be with you now and for ever.

While not a personal “story” as such, this document represents the South African response to the Kairos Palestine document and helps tell the story of the relationship between the two documents and the people that wrote them. The full response is worth reading, and is available at https://www.oikoumene.org/en/resources/documents/other-ecumenical-bodies/south-african-response-to-kairos-palestine-document.

First, read the Kairos Palestine document, then sign the “Cry of Hope”.

Next, send the Kairos Document to your local church. Include a message such as “Please include the plight of Palestinians in your prayers, sermons, and work as a church. The Kairos document can help you: https://www.kairospalestine.ps/index.php/about-kairos/kairos-palestine-document.”

You can then share the document via Facebook, Twitter, or email with both your religious and nonreligious friends. Include the message: “The Kairos Palestine Document outlines the suffering of all Palestinians, and should be a model for peoples of all faiths in how to approach and solve the Israeli occupation.” Include a link to this page of the Kumi Now website along with the hashtags #KairosPalestine, #KumiNow, and #Kumi48.

The time has come. The moment of truth has arrived. South Africa has been plunged into a crisis that is shaking the foundations and there is every indication that the crisis has only just begun and that it will deepen and become even more threatening in the months to come. It is the KAIROS or moment of truth not only for apartheid but also for the Church.

We as a group of theologians have been trying to understand the theological significance of this moment in our history. It is serious, very serious. For very many Christians in South Africa this is the KAIROS, the moment of grace and opportunity, the favorable time in which God issues a challenge to decisive action. It is a dangerous time because, if this opportunity is missed, and allowed to pass by, the loss for the Church, for the Gospel and for all the people of South Africa will be immeasurable. Jesus wept over Jerusalem. He wept over the tragedy of the destruction of the city and the massacre of the people that was imminent, “and all because you did not recognize your opportunity (KAIROS) when God offered it” (Luke 19:44).

A crisis is a judgment that brings out the best in some people and the worst in others. A crisis is a moment of truth that shows us up for what we really are. There will be no place to hide and no way of pretending to be what we are not in fact. At this moment in South Africa the Church is about to be shown up for what it really is and no coverup will be possible.

From the 1985 South Africa Kairos document.