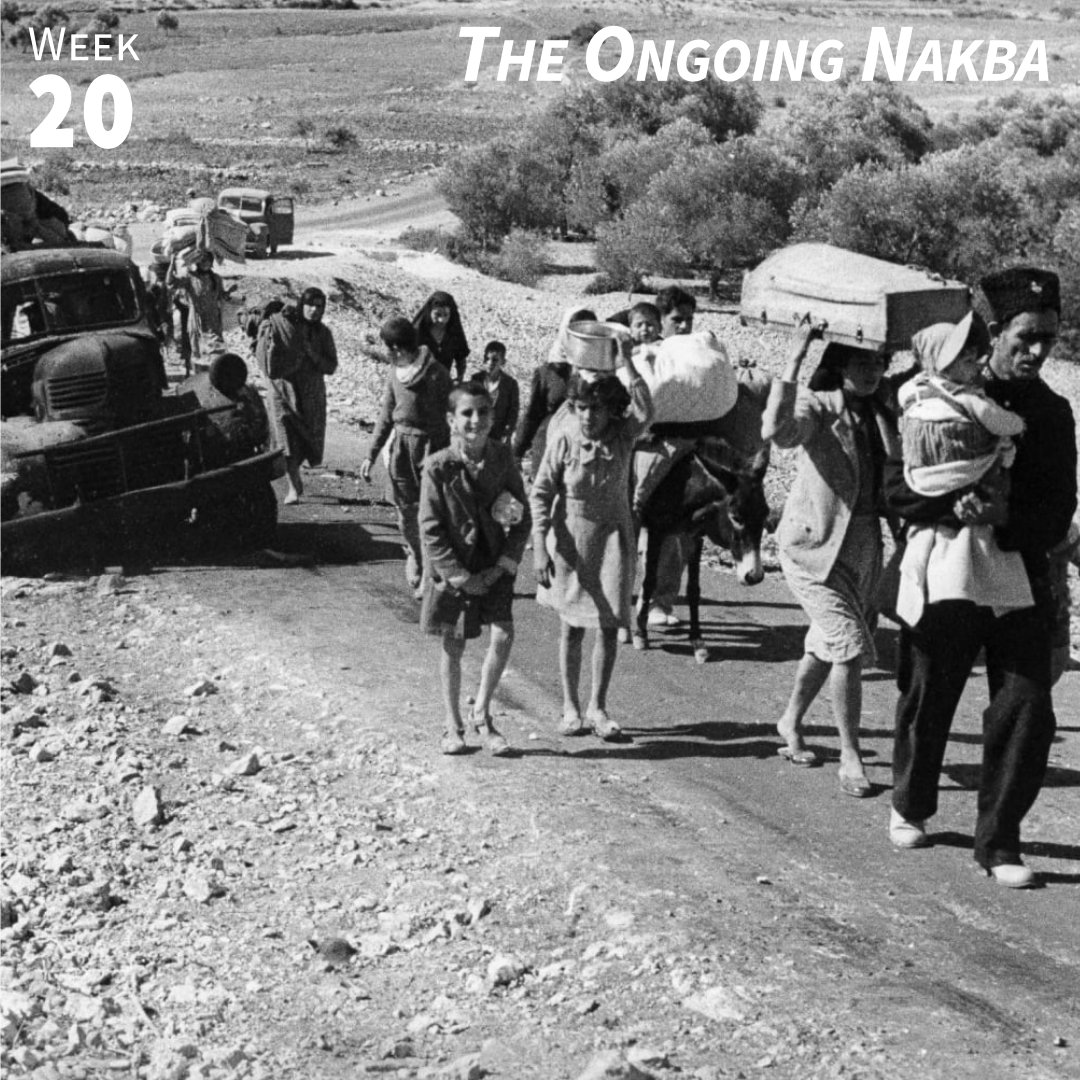 For Palestinians, May 15 is Nakba Day. That is the day following the Israeli Independence Day on the Gregorian calendar. The term Nakba refers to the 1948 catastrophe when over 1,000,000 Palestinians were forced from their homes or fled in fear for their lives. But this use of the term in the past tense suggests that the Nakba was over and done 70 years ago. This is not the case, as the events of 1948 were just part of a consistent and ongoing process that dates back to the Balfour Declaration and continues today. Here’s what you need to know about the ongoing Nakba and what you can do so that together we can rise up.

The groundwork for the expulsion of Palestinians began under the British Mandate, then accelerated with the Nakba of 1947–49 and the 1967 war. BADIL estimates that between 100,000 and 150,000 Palestinians were displaced under the Mandate, roughly a million were displaced in the Nakba, and another 400,000 to 450,000 were displaced in 1967. BADIL provides more of this historical context in their Kumi Now entry and explains why the decades since then are rightly called the ongoing Nakba, as Palestinians continue to be forced from their lands by Israel:

Alongside the two main periods of historical forced displacement, the ongoing displacement of Palestinians continues to this day through the implementation of multiple policies of forcible transfer and displacement. These policies create an increasingly coercive environment that leaves Palestinians with no option but to leave their homes and communities. A multitude of discriminatory practices are employed by Israel to control all aspects of Palestinian life and ultimately change the demographic composition of Mandate Palestine. BADIL has identified nine main interrelated Israeli policies enclosing many triggers and means, which constitute the pillars of a strategy aimed at forcibly displacing the Palestinian population in and beyond historical Mandate Palestine.

One of Israel’s strategies to silently transfer Palestinians is through revocation of residency, and denial or hindrance of child registration, family unification or change of residence. Since the right to residency status is a condition for accessing a multitude of other rights, many people who hold no status under Israeli law are not eligible for health services, cannot enroll in schools, open bank accounts, work legally, own property, obtain a driving license or travel documents. In Jerusalem alone, more than 14,000 Palestinians lost their residency status and right to live in East Jerusalem since 1967.

Israel installed a regime in which permits regulate and interfere with various facets of life of the occupied civilian populace, such as travel, work, and transporting goods and assets. The permit regime exceeds a mere restriction on the freedom of movement and, instead, commonly results in the complete denial of access to land, work or health facilities. Palestinians are only allowed to build with a building permit issued by the Israeli authorities. Between 2008 and 2012, 97.7 percent of building permit applications in Area C submitted by Palestinians were rejected by the Israeli authorities.

3. Land Confiscation and Denial of Use

In addition to the actual confiscation of land, Israel employs different means to restrict or completely deny the use and access of land. Today, Israel occupies the entire surface of the occupied Palestinian territory (some 6,220 km²) and has confiscated or de facto annexed more than 3,456 km² (61 percent) of the West Bank (including East Jerusalem) for the exclusive benefit of Jewish colonizers. In addition to land confiscation, numerous laws and policies in the West Bank, Gaza Strip, and Israel restrict Palestinian landowners’ access to and use of their land.

In order to contain and restrict the growing Palestinian population, Israel applies discriminatory zoning and planning policies. As a result, thousands of Palestinian families live in overcrowded and unsafe conditions because they are prevented from using their own land or accessing public land. Through a discriminatory and unjustifiable modification to the planning laws that were in place prior to the 1967 occupation, which is in itself a violation of International humanitarian law, Palestinians are prevented from participating in planning processes and in the development of successive Master Plans.

The Israeli segregation policy exceeds geographic separation; it targets the unity and national identity of the Palestinian people. This policy of categorization and isolation goes beyond the aim of separating Palestinians from Jewish-Israeli citizens; it divides Palestinians into geopolitical categories subjected to a hierarchical system of rights.

U.N. General Assembly Resolution 194, passed on December 11, 1948, resolves that the refugees should be allowed to return to their homes at the earliest practicable date and that compensation should be paid to those choosing not to return and for loss or damage of property. However, since 1948, Palestinian refugees are denied their right to return and citizenship, and thus Israel’s illegally and militarily enforced policy constitutes a violation of Palestinian individual and collective rights.

This policy includes systematic and mass military attacks/wars, invasions, unlawful killing, collective punishment, house demolition, closure, blockade, incarceration, torture and the suppression of the freedom of expression and assembly, as well as criminalizing acts of civil opposition or disobedience. This policy of suppression and criminalizing of resistance affects Palestinian communities and individuals and creates an unstable environment of fear and collective punishment.

This policy is carried out by colonizers, parastatal bodies and organizations, or colonial private actors. It is supported either in the form of direct involvement or complicity by official Israeli bodies or highly-ranked officers. It can be seen in a wide range of illegal actions such as colonizer attacks, harassment of Palestinian properties, and privatization of Palestinian lands. For example, the Israel Land Administration Law of 2009 allows the privatization of lands (initially belonging to Palestinian refugees and Internally Displaced Persons) “owned” by the State of Israel, the Jewish National Fund (JNF) and the Development Authority within both Israel and the occupied Palestinian territory, authorizing the sale of settlement units and areas confiscated for colony (settlement) construction from Palestinians to private Jewish owners.

Essay submitted by BADIL. Updated for the second edition of Kumi Now.

Nabi Samuel village lies within the West Bank, but after the construction of the Wall, Israel has [de facto] annexed it. Everything Israel is doing is meant to cause displacement of Palestinian residents because Nabi Samuel is a very strategic area. Israel considers this area to be a nature reserve, or at least this is what it hopes for. There were announcements in newspapers saying that Nabi Samuel is an official Israeli Nature Reserve and it has no Palestinian residents.

My family’s house in Nabi Samuel was demolished in the mid-nineties as, we were told we had no building permit for an addition to the property.…

People leave Nabi Samuel to look for a better living environment. There hasn’t been any intention to make things better in Nabi Samuel; therefore, people basically have no choice but to leave. This community is very limited and cannot be developed in terms of space, facilities, homes and all of the basic necessities one should have.

There is a very high unemployment rate here. And if someone wants to work in Jerusalem, you basically can’t, because you are not allowed to work without a permit, and in addition to that, in the event one was able to obtain a permit, going there is expensive because there are no [affordable] transportation methods available, on top of the fact that the wages are low.

There is lack of access to education, no grocery shops, no permits to build and extend houses, and there are checkpoints surrounding this area. Whenever you plan to get something new, or purchase food or get a service (shared taxi), you need to coordinate with the Israelis and get it sorted.

Although I have everything available in al-Jeeb, and it’s easier there, I would rather live here in Nabi Samuel. Even if I had to live in a tent, I’d live here and nowhere else. When I come here, I don’t come here only for my family. I come here to visit my hometown. I miss this place, and I miss every little part of it. I come here and ask my friends to come along with me and we start walking around just because we love it. I adore this place. I really do…

Living here is terrifying and unsafe. When clashes occur in Jerusalem, Israeli settlers come to Nabi Samuel and start getting in the way of residents here. It is easy if a settler wants to harm Nabi Samuel residents, as we have no security services or authority in this area. During this latest Intifada, a very famous Israeli rabbi was killed, and we were told through media and other resources that Israeli settlers were on their way to Nabi Samuel. A lot of Palestinians went and gathered rocks to prevent these settlers from attacking their houses and families. This violence has a huge impact on the children. For instance, when that incident happened, they brought together all the children of Nabi Samuel to my aunt’s house—since it is the oldest house with the biggest doors—to keep them safe. There was a lot of screaming. Mothers couldn’t leave their children alone, but at the same time, they were extremely worried for their husbands out there, so they wanted to go along with them.

People here feel pressure, fear, and feel unsafe. You never know when you might be attacked by a settler or even get your house demolished. This topic is very sensitive, because it deals with the entire population of Nabi Samuel. When you ask someone from here what they dream of, their answer would be to extend their houses, and build new rooms to satisfy their needs.
We stay because it is our land. If we leave, it would be easy for the Israelis to steal it. Staying here is an expression for us that we exist.

If you are unable to change the name of the street nearest the Israeli consulate or embassy, get creative and take matters into your own hands! Commemorate Nakba Day on May 15 by changing the name of your driveway, private road, school walkway, local street, or hall. Post informational signs to help people understand the name and Nakba Day.

Take a photo of your street signs and post them to social media. Include a link to this page of the Kumi Now website along with the hashtags #NakbaDay, #KumiNow, and #Kumi20.

At night, orders came to the soldiers

to destroy our lovely village, Zeita.

spark of the winds!

The soldiers came in the dark

while the sons of the village

the trees and fields and flower buds

hugging her for shelter …

“Orders demand that all of you depart

Zeita will be destroyed before the night ends.”

But we held tight, chanting:

Zeita is the land, the heart of the land,

and we her people are its branches.

a few moments of resistance,

so Zeita remains an eternal embrace across the nights

In moments she was rubble,

Not a single bread oven remained.

Were pasted and powdered by enemy tractors,

Scattered forever in the gift of the impossible.

Now in the evenings

in the song of our wind,

Zeita returns to the fields

Night is morning in Zeita,

By Sulafa Hijjawi, a Palestinian poet, translator, and researcher from Nablus. As published in Anthology of Modern Palestinian Literature, edited by Salma Khadra Jayyusi and translated by May Jayyusi and Naomi Shihab Nye.

We have a YouTube playlist with videos about Freedom of Speech.