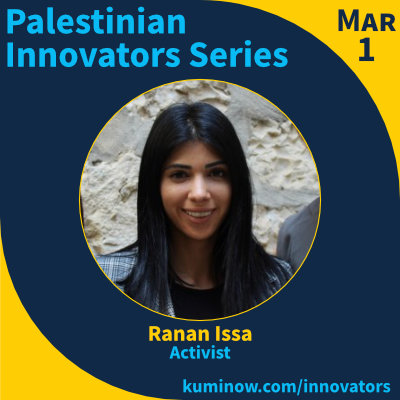 On March 1st we met the third guest in our Palestinian Innovators series, Ranan Issa, Gender Justice Program Manager of the ELCJHL.

Ranan Issa Abu Shanab is the Gender Justice Program Manager at ELCJHL. With over 5 years of professional experience in the field of gender justice, she heads the ELCJHL’s Women Ministry by working closely with its pastors and Women’s Committee. During the course of her career, Ranan has had the opportunity to work with interfaith-based actors who are dedicated to the equality of women. She is a co-chair on the Act Alliance Gender Justice Reference group and a co-founder of the Gender Justice 4 Palestine committee.

Link to subscribe to ELCJHL newsletter and social media:
https://elcjhl.m-pages.com/0Y3Fb7/elcjhl-newsletter?fbclid=IwAR3p4qYjf6hdqrvxU4yqXkRIjAz4Ico3_r8HPHOIWo9SeCTFjcwPa7e1tKA

Video documentary of how ELCJHL reformed its family law:
https://www.youtube.com/watch?v=ZzPTZPYLOj8