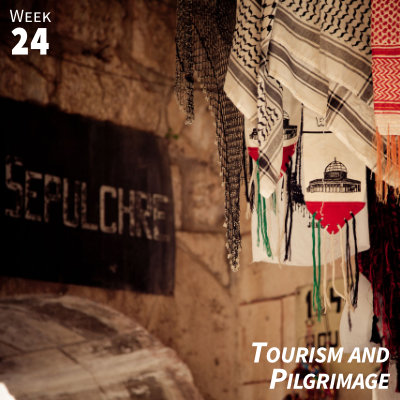 For the northern hemisphere, students and families around the world are beginning their summer vacations. While in the southern hemisphere students may be looking forward to a winter break. Many people take these times to travel: to visit family, as tourists, or as pilgrims. Whether or not you are spending your own travel money to go on holiday or pilgrimage in Israel and Palestine, you can, as part of the Kumi Community, help have an impact. That’s why, this week, we learn about ethical tourism and pilgrimage, so that together we may rise up.

When we travel, our first thoughts are not usually to the impact that our spending is having on a local community. And yet, tourist by tourist and pilgrim by pilgrim, many families, businesses, and communities are sustained by our travel spending. As such, being thoughtful in how we spend our travel money becomes a powerful way to send a message. Furthermore, the act of traveling is itself a sort of political statement, even when you’re actually just trying to find somewhere to get away from it all. Because as we travel, we are often seen as giving implicit approval to the governments that host us. Western visitors to regimes considered, by some, to be hostile to Western ideals have often been criticized for visiting these regimes, regardless of their stated intents.

It is also important to realize that governments use the tourism industry both for economic gain and to shape and promote a narrative (often far removed from reality) of the country’s past and to justify its current policies. The Alternative Tourism Group, through its Alternative Tourism Journal has fully documented how Israel:

Now, you might be thinking that you don’t have plans (or the money!) to visit Palestine or Israel anytime soon. But this does not mean you should pass this topic by. There is still much you should know and much you can do to help. First, you might know of an individual or group that might be headed here on vacation or pilgrimage. Second, major travel companies are making money off of the tourist money spent in Israel and Palestine. These are corporations that will listen to their consumers, but only if the voices are loud enough and numerous enough to get their attention. The obvious place to start is to look at Airbnb. After years of pressure for listing and profiting off of properties built in the illegal Israeli settlements in the West Bank, in November 2018 Airbnb announced it would stop listing these properties in the West Bank. However, Airbnb was sued by several Jewish customers who argued that they

were being discriminated against based on religion. The illegality of the settlements, and the prohibitions against profiting off of occupation, are well documented2 and firmly based on international law, not religion, but Airbnb caved to the pressure, quietly settled the lawsuits, and now continues to include listings in the settlements. As a sort of compromise, Airbnb says it will not take profits from any of these listings, instead donating the profits to organizations and NGOs. While the move has generally been approved by Israel and its supporters, it has come as a shock to supporters of human rights, who urge NGOs to reject money from Airbnb.

Of course, Airbnb isn’t the only tourism company profiting off of the occupation and settlements. In its report “Destination: Occupation,” Amnesty International also studied Booking.com, Expedia, and TripAdvisor, and concluded:

By boosting the settlement tourism industry and, as a result, the settlement economy, Airbnb, Booking.com, Expedia and TripAdvisor are contributing to, and profiting from, the maintenance, development and expansion of illegal settlements, which amount to war crimes under international criminal law. Their promotion of settlements as a tourist destination also has the effect of “normalizing,” and legitimizing to the public, what is recognized under international law as an illegal situation.

The companies are not ensuring that the locations of settlement properties, activities and attractions are accurately reflected on their websites. Incorrect or incomplete geographical descriptions can result in customers inadvertently supporting illegal Israeli settlements.

The fact that digital companies also contribute to, and benefit from, violations of the human rights of specific groups of Palestinians, as established in the case studies, makes their participation in the settlement enterprise all the more objectionable.

Amnesty International’s conclusions were validated by the United Nations, which in early-2020 finally released its initial database of companies illegally profiting from the occupation.5 The database includes international travel companies such as Airbnb, Booking.com, eDreams, Expedia, and TripAdvisor.

While Airbnb’s response to the Amnesty International’s report was disappointing, the response from the other companies has been even more dismissive. Furthermore, having weathered the criticism of the Amnesty International report, none of the companies has, as of yet, faced significant pressure following the publication of the U.N. database. Clearly, there is much work for tourists and governments to do in order to hold these companies accountable. As such, through the week, Kumi Now will publish essays and stories from different organizations further exploring this topic and highlighting what they are doing to create a tourism industry in Palestine that supports Palestinians. And for those of you contemplating a trip to Palestine or Israel, we will highlight and publish guides to help you make sure that your trip is ethical and sustainable.

Sarah and his company, MEJDI, were leading a tour with two tour guides, one Palestinian (HJ) and one Israeli, in the Old City when “a policeman with another woman in civilian clothing approached our Palestinian tour guide, asked for his identity card and tourism license, and arrested him.”

He knew HJ well, knew he was a fully licensed tour guide, and had even double-checked HJ’s legal status. And yet, when the officers saw the green identity card “They behaved like they made a big catch. They ignored the fact that HJ had a travel permit and a license to work in Israel. I actually heard them say: ‘Even if he can work in Israel, he couldn’t possibly be a licensed tour guide.’”

Sarah tried to explain the situation, but instead of listening, the officers decided to also arrest Sarah for supposedly employing an illegal alien. They were pulled from their tour and taken to the station. Luckily, the interrogator quickly realized that the officers had made a mistake. While Sarah and HJ were released, HJ’s magnetic ID card had been “lost.” The police refused to take any responsibility for it, meaning that HJ would face another round of harassment when he attempted to replace it.

While no one ended up charged with a crime or spending a night in prison, it is an example of the daily harassments and injustices of the occupation. Sarah also points out how small incidents such as this make it difficult for Palestinian tour guides to make a living and for the rest of us to employ them:

“This incident puts me in a difficult situation. What do I do next? Do I still hire HJ and possibly other West Bank guides despite the danger of police harassment? Or do I let this incident induce me to boycott Palestinian tour guides?

“As a businessman, I cannot allow such situations to happen again to any of my tour groups. It affects the professionalism of my business. But at the same time I cannot let discriminatory police officers win this battle. Is lawful and respectful treatment of Palestinians too much to ask for? Are Palestinians guilty until proven innocent?”

While Sarah makes it a clear goal of his business to tell the full story and employ Palestinians in addition to Israelis, it is not difficult to understand how other tour guides, or anyone coming from abroad, would hesitate to hire a Palestinian guide for fear of arrest or simply having to cancel a tour.

From “I Was Arrested for Hiring a Palestinian Tour Guide” by Aziz Abu Sarah for +972 Magazine. Available at https://972mag.com/i-was- arrested-for-hiring-a-palestinian-tour-guide/21312/.

We have created short profiles of different sites around Palestine. They are available below and we will post them on the Kumi Now social media accounts. Take these images and post them (or share our posts), one per day, on social media, or print them out and post them someplace others can see them.

Include a link to this page of the Kumi Now website along with the hashtags #VisitPalestine, #EthicalTourism, #KumiNow, and #Kumi24.

Literature: “To Enter a Country” by Tawfiq Sayigh

One group descends
another ascends
the officials change
people hurry forward
and dead embers shine again in your head. Passports are stamped.
Everyone hurries in:
murderers, traitors, and spies,
one holding a green passport,
with a black one in his wallet;
others lean on the rickety gangplank,
finding that after completing their short journey they have to embark on the long one.
Some are carried on board
without sense of a homeland or voyage.
You cry out, pray, supplicate:
“My papers are in order;
I have a degree in every pocket,
why have they not issued my passport? Who or what informed on me?
What are the charges against me?
I can answer to anything.
There are no embassies in the ocean.”

From “To Enter a Country” by Tawfiq Sayigh. Translated by Adnan Haydar and Jeremy Reed and published in Anthology of Modern Palestinian Literature, edited by Salma Khadra Jayyusi.

We have a YouTube playlist with videos about tourism and pilgrimage.