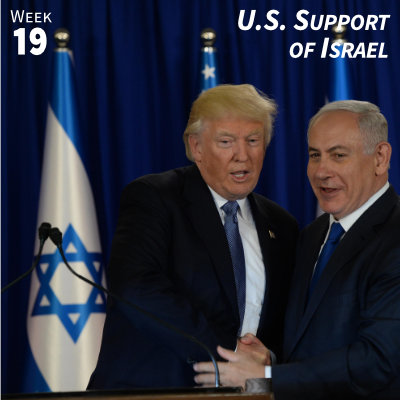 Palestinians in the occupied territory have long suffered as a result of U.S. support of Israel. The Trump administration’s decisions to move the embassy to Jerusalem on May 14, 2018, cut aid to Palestine, and recognize Israel’s claims to the Syrian Golan are only a few of the markers of America’s neglect of Palestine. Here’s what you need to know and what you can do so that together we can rise up.

The United States is the primary international supporter and enabler of Israel’s oppression of the Palestinian people. Israel receives more military aid from the U.S. than all other countries combined. Israel uses these weapons to injure and kill Palestinians with impunity and to demolish their homes and infrastructure.

Since its establishment in 1948, the United States has provided Israel with more than $100 billion in military and economic aid. From 2009-2018 alone, $30 billion in U.S. taxpayer-funded weapons went to Israel through the Foreign Military Financing (FMF) program. In 2016, President Obama signed a memorandum of understanding with Israel to provide an additional $38 billion in weapons over the next ten years.

Israel often kills Palestinians with U.S. weapons—fighter jets, helicopter gunships, missiles, tanks, mortars, ammunition, etc.—provided by US taxpayers. In addition, every aspect of Israeli colonization and military occupation of Palestinian land is abetted and facilitated by US weapons, from Israel’s use of Caterpillar bulldozers to demolish Palestinian homes and build illegal colonies to its use of Jeeps to transport Palestinian children to military detention in which Israel often subjects them to violence, in some cases amounting to torture.

The United States has numerous laws on the books which are supposed to prevent foreign countries from using U.S. assistance to commit human rights abuses:

The United States should ensure that Israel, like every other country in the world, is held accountable. Sadly, under the Trump administration, the direction has been in the opposite direction: instead of holding Israel accountable for its abuses against the Palestinian people, President Trump has allowed Netanyahu to act with impunity. Following Trump’s inauguration Netanyahu announced his intention to lift all restrictions on construction in the West Bank and plans expanding settlements in the West Bank have accelerated as a result. In late-2017 President Trump recognized Jerusalem as the capitol of Israel, and followed through by moving the American embassy to Jerusalem the following year. In 2019 he recognized the Golan Heights as part of Israel, making the United States the only other country, besides Israel, to recognize Israeli sovereignty over the region.

Trump ended 2019 by signing an executive order that would withhold funding to universities that allowed antisemitic activities on campus. Unfortunately, the definition of antisemitism used is that of the International Holocaust Remembrance Alliance, which casts any criticism of Israel or its policies as antisemitic. As a result, it is clear that, as opposed to holding Israel accountable for its own actions and use of U.S. funds, the Trump administration is targeting Palestinian solidarity and actively working to censor those that wish to hold Israel accountable.

Thus, it is up to American citizens to hold their own government accountable for the military aid it provides to Israel and the violations of national and international law that result. Similarly, citizens of other nations should identify ways in which their own countries’ support Israel and hold their lawmakers accountable when that support is used by Israel to flaunt international law. Through the week, Kumi Now will publish essays and stories from different organizations further exploring the intended and unintended consequences of U.S. support for Israel and highlighting what they are doing to address it.

Essay submitted by the U.S. Campaign for Palestinian Rights (USCPR).

“I’m fast, and I love running.” 17-year-old medal-winning track athlete Mohammad Al-’Ajouri used to dream of becoming an international competitor and traveling to the West Bank from his home in the Jabaliya refugee camp in the Gaza Strip, a journey of merely 30 miles that is impossible for most Palestinians to make. Israel controls nearly every aspect of Palestinian life, including their movement between different cities and sections of the occupied Palestinian territory. When an Israeli sniper shot Mohammad in the leg, it might not have been the end of his dreams, but because he was denied permission to travel to the West Bank for treatment, doctors in Gaza were forced to amputate his leg.

Mohammad is one of thousands of Palestinians who have been shot by Israeli snipers at the Gaza boundary in the past year since the start of the Great Return March. The Great Return March is a weekly protest along the Gaza boundary that started on March 30, 2018, where protesters demand the right for Palestinian refugees to return to their homes and villages, and an end to the decade long siege on the Gaza Strip. Israeli forces have employed rules of engagement during these protests that permit them to shoot live ammunition at “inciters” and “security threats,” but in reality snipers shoot indiscriminately, targeting health workers, journalists, children, and women with impunity. When Mohammad was shot, he was helping his nearby friends who were suffering from tear gas inhalation.

The sniper that shot Mohammad most likely used an American Remington M24 rifle or an Israeli Weapons Industries Tavor rifle, both of which are used with “exploding” ammunition that has been expressly banned under international law. These have been the weapons of choice used by the Israeli military on Palestinian protesters at the Great Return March in Gaza for the last year: weapons that are being developed by the Israeli weapons industry, which is subsidized by the US and profits immensely from the military occupation of the Palestinian territories, and weapons that are being made and supplied by the US.

Mohammad was one of the luckier ones. With the help of the Palestine Children’s Relief Fund, he was able to fly to Cincinnati to be fitted for a prosthetic leg, and he now has renewed dreams of being an athlete. His resilience and optimism speak volumes about the steadfastness of the Palestinian people, who continue to fight for equality, freedom, and justice in the face of seemingly insurmountable challenges. Ending U.S. military aid to Israel would place Palestinians like Muhammad in a more empowered position to challenge the brutal Israeli occupation, and one day live in a world where their dreams can’t be shot down by a sniper’s rifle.

Americans: How much of the annually allocated $3.8 billion of military aid to Israel is provided by your state, congressional district, county, and city? What could be funded instead with this money to benefit your community? Visit http://militaryaidtoisrael.org/ to learn these details and more through our interactive map. If you don’t live in the United States, you can do your own research into your local government’s support of Israel and share that knowledge with the Kumi Community.

Armed with this knowledge about your local government’s involvement in Israeli human rights abuses, you can visit https://www.citiesforpalestine.org/ and explore options to engage and mobilize your local community to support Palestinian rights and bring the struggle for freedom, equality and justice to your city. Learn from successful campaigns in other cities, and equip yourself with the toolkits provided here!

Post photos or other evidence of your action to social media and include a link to this page of the Kumi Now website along with the hashtags #CitiesforPalestine, #KumiNow, and #Kumi19.

Our government protects Israeli military and political officials from ever being held accountable for their violations of international law, violations of human rights, even war crimes … some of our police departments go to training by Israeli national police and military, [who teach] our law enforcement officers the things they have learned in dealing with an occupied population, and we must challenge that.

Why? Because the most damnable violence is always policy violence. Policy violence: the systemic use of power to privilege some and exclude others. We must confront the injustices against Palestinians because much of it is injustice carried out on our dime, in our name.

Excerpts from a speech made by Rev. Dr. William J. Barber II, pastor and civil rights leader, at the USCPR national conference in September 2018

We have a YouTube playlist with videos about U.S. support of Israel.