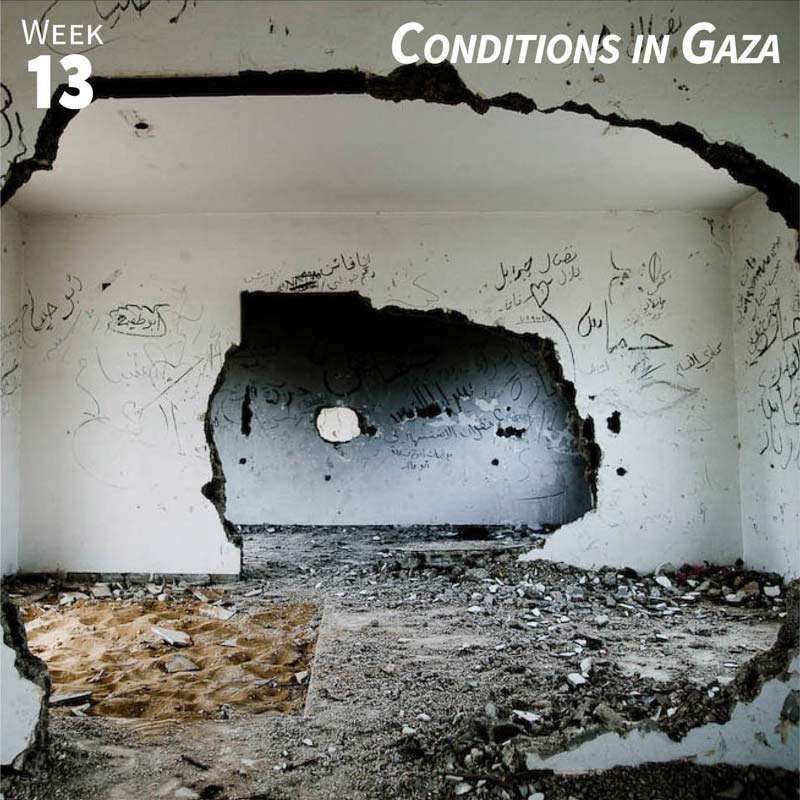 On March 30, Palestinians celebrate Land Day, a commemoration of the first Palestinian general strike, in 1976, against land confiscation in Israel. On the same date in 2018, Palestinians in the Gaza Strip launched the Great March of Return to protest the blockade of Gaza and demand the right to return to their lands. This week, the Kumi Now community stands in solidarity with the citizens of Gaza as we focus on the blockade. Here’s what you need to know and what you can do so that together we can rise up.

Gaza’s woes began in 1948 when, at the end of the 1948 War, it came under the control of Egypt. An influx of refugees fleeing the Palestinian villages and towns occupied and destroyed by Zionist forces quickly strained the Gaza infrastructure. Its status as the biggest prison on Earth was cemented by the Israeli occupation of Gaza in 1967. In 1994 administration of Gaza passed to the Palestinian National Authority, and in 2005 Israel withdrew its troops and settlers from Gaza.

However, following Hamas’s takeover of the government in 2007, Israel and Egypt enforced the blockade of Gaza, and the years since then have seen bouts of violence and retaliation from both sides. Israel would argue that their incursions into Gaza were retaliation for missiles fired from Gaza. The reality, however, is that while both sides have suffered, the casualties inflicted upon Gazans by Israeli forces have been severely disproportionate and often indiscriminately target civilian areas.

Militarily, this comes as a result of the Israeli military’s Dahiya Doctrine, in which in response to missile attacks they would respond with “the comprehensive destruction of areas in their entirety and the employment of unparalleled force.”

Picture, then, an area the size of a mid-sized city, but enclosed by a fence and decimated by years of military invasions. This area houses 2 million people, making it one of the most densely populated places on Earth, but with almost no access to the natural resources necessary to support that population. This led the U.N., in 2012, to declare that by 2020 Gaza could be “unlivable.” In 2017, however, the U.N. released a follow-up report, concluding “Sadly, as we check-in on those same trends again … the deterioration has accelerated, sped along not least by a devastating round of hostilities in 2014 from which we are only now starting to recover.”

In his book The Biggest Prison on Earth, Ilan Pappe calls Gaza “The ultimate maximum security model.” What this means on the ground is that:

We are able to outline only a small fraction of the debilitating effects of the blockade in such a short document. To learn more about how the blockade of Gaza affects women, you can read the entry by Coalition of Women for Peace. To learn what it is like living in Gaza, read the full entry from Churches for Middle East Peace. We confront the crisis in Gaza again in Week 38: Blockade of Gaza and more specifically address the effects of the blockade on women, infrastructure, farmland. While in Week 6: Medical Rights we brought a focus to its effects on medical care.

Furthermore, the regular fatalities and further restrictions in retaliation to the Great March of Return made conditions worse, not better. Clearly, Israel, Egypt, and the United Nations have a moral responsibility to treat Gazans as the civilians, families, children, and refugees they are and respond appropriately. Until this happens, organizations like the Al Mezan Center for Human Rights, CWP, Aid Watch Palestine, CMEP, and many others are working to document abuses in Gaza and help the people.

Throughout the week Kumi Now will publish essays and stories from these and other organizations further exploring conditions in Gaza and highlighting what you can do to help.

One of CMEP’s summer interns, Oday Abdaljawwad, is a Fulbright Scholar completing his Master’s Degree in Peacebuilding and Conflict Resolution at Brandeis University. He grew up in Gaza. When he was last home, one could expect to get six hours of electricity, followed by an eight-hour blackout. After talking with his family recently, Oday found that on average they go thirty hours at a time without electricity. Student life was difficult enough with only six hours of electricity: often they were unable to properly study, research, or turn in their assignments.

During the 2014 war, many Gazans updated their friends and family through Facebook. As Oday was checking in on his loved ones during a lull in the fighting, he saw two photos of mothers weeping at their son’s funerals; one was Palestinian, the other Israeli. He recalls that moment as one of enlightenment: it was the first time he saw Israelis not as soldiers and enemies, but as human beings who feel, suffer, and can lose those they love, a feeling with which he is familiar. His uncle and two of his cousins have died during Israel’s wars in Gaza.

Oday wanted to earn a master’s degree since he had seen how his father’s master’s degree had improved his family’s quality of life, and hoped to study either English or linguistics. After his moment of enlightenment, Oday decided to study Conflict Resolution and Peacebuilding instead and applied for a Fulbright Scholarship. He chose Brandeis specifically because it was a Jewish university and his desire to learn about Jewish culture and show that community many Palestinians do want peace. The occupation led him to grow up believing the misconception that Jews and Israelis are one and the same; subsequently all Jews were Palestine’s enemies. Ten years ago, Oday held dramatically different hopes for the resolution of the Israel-Palestine conflict; he would have called for an end to Israel’s existence. Now he sees the two-state solution and an end to the occupation of Gaza and the West Bank, as well as the fulfillment of Palestinian’s basic needs, as the way forward and acknowledges the problems with his previous viewpoint. Despite the adversity he has faced, Oday is convinced that if activists focus on connecting and uniting Israelis and Palestinians and educate themselves on the issue, there will be positive, tangible gains towards peace.

On your Facebook account “check in” to Gaza for one week with a photo that says “Open Gaza” in solidarity with those who actually live there. Change your hometown or place of residence to “Gaza” on all of your social media accounts for one week. Also, share one of the short videos or other items listed under Additional Resources on social media and include links to this page of the Kumi Now website along with the hashtags #OpenGaza, #KumiNow, and #Kumi13.

a festival of lights

a casting of lead upon children

an army feasting on epiphany

some must die wrapped in floral petroleum blanket

i have come to every day armageddon

six candles burn down a house

a horse tied to smoke

some must die to send a signal

the living want to die in their country

no open doors no open seas no open

each day faith over fear

each day a mirror of fire

the living want to die with their families

some must die for not dying

children on hospital floor mother beside

them the father in shock this is my family

i have failed them this is my family i did

not raise their heads i have buried them

my family what will i do now my family is bread

one fish one people cut into pieces

there is a thirst thefts life

there is a hunger a winter within winter

some must die to bring salvation

i have come to end times always present

the woman lost parents her children and screams

my sister’s eyes were honey her voice mine

i can’t face this only god only god my sister

the injured are dying the dead are buried in three

hours the people pray together and curse the people

mourn loud and quiet always too loud not enough

some must die because they are the vicinity

some must die because it was written

no army does not apologize has never

the living are dying and the dying living

a festival of lights

a strip a land a blaze

the sea a mirror of fire

a casting of lead upon children

their heads roll off their shoulders into streets

their tops spin in hands

an army feasting on epiphany

Suheir Hammad is a poet, author, and activist. Originally born in Jordan, she is the daughter of two Palestinian refugees. Online you can find Suheir Hammad perform her Gaza Suite at the Palestinian Festival of Literature and a video of her appearance at a TED conference.

Videos on life in Gaza:

We have a YouTube playlist with videos about conditions in Gaza.

And three of our previous entries addressed issues in Gaza: