Week 23: Environmental Effects of the Occupation 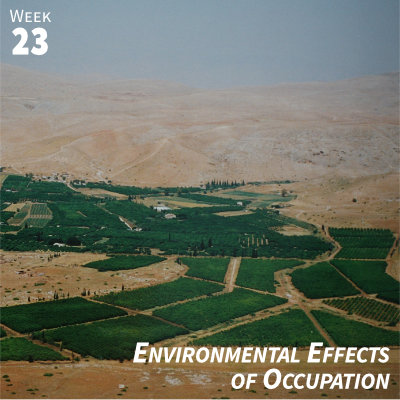 June 5 is World Environment Day. While Palestinians as a people are under constant threat and assault from the occupation, the environment around them, and on which they rely, bears similar attack. A community can’t hope to heal in an environment that is sick, and conversely, a society that is suffering is unable to aid the environment in its own recovery. Here’s what you need to know about the environmental effects of the occupation and what you can do so that together we can rise up.

In the late 19th century, Palestine had some 1,300 native villages and towns, most going back thousands of years and living in harmony with nature. This structure radically shifted after the First Zionist Congress in 1897 with mostly European Jews migrating and taking over the land. The destruction of an ancient way of life included destruction of more than 500 villages and towns and their land primarily re-cultivated with European pine trees which damaged the local environment. When the West Bank and Gaza came under Israeli rule in 1967, more destruction followed with Israeli colonial settlements now housing 800,000 Israelis in the occupied Palestinian territory. The Palestinian environment has been traumatized by the uprooting of native trees, construction of settlements, building of the apartheid wall, military activities, industrial settlements, and the engineering of water projects that divert water from the Jordan Valley and underground aquifers.

“It’s a Zionist paradox. We came here to redeem a land and we end up contaminating it,” laments Alon Tal, Founder of the Israel Union for Environmental Defense.

Mega-Projects and Destruction of Native Habitats

Early Zionist “pioneers” in the first half of the 20th century destroyed many local trees (figs, almonds, olives etc.) and this reached its peak in what was called an environmental Nakba (catastrophe) in 1948–1949. The destroyed village lands were cultivated by imported European pine trees, creating a monoculture. This had a devastating impact on landscape and biodiversity. These trees were also susceptible to frequent fires. In the 1950s, the nascent state of Israel also destroyed the Hula Wetlands, a major site of bird migration and habitat to many local fauna and flora. Hundreds of species disappeared. Additionally, Israeli planners diverted waters from the upstream sources of the Jordan River Basin to the coastal areas for political reasons. This initiated the destruction of the Jordan Valley and the drying-up of the Dead Sea and resulted in huge negative environmental impacts. To make things worse, Israeli planners are working with Jordan on a Red Sea–to–Dead Sea canal that will destroy Wadi Araba and the coral reef areas of the Red Sea, if the plan ever overcomes political hurdles.

Every aspect of colonial infrastructure building brought with it substantial environmental impacts. Residential settlements are usually built on hilltops, with little or no regard to environmental impact or even dealing with their waste. Separate infrastructure is built to link settlements creating infrastructure redundancy (decaying roads for Palestinians and wide highways for Israelis). Industrial settlements dump their toxic waste and release polluted air near remaining Palestinian communities. At the Barqan industrial zone there are factories working with aluminum,

fiberglass, plastics, and other industries that produce extensive pollutants. The Special Rapporteur found that “the industrial wastewater that flows untreated to the nearby valley damages agricultural land belonging to the neighboring Palestinian villages of Sarta, Kafr al-Dik, and Burqin, polluting the groundwater with heavy metals.” There are at least six other industrial zones. Forcing Palestinians to take alternative roads around settlements and walls also creates delays, increases vehicle emission, and causes health effects. Settlements also bring with them settler violence. Settler violence has uprooted and burned thousands of trees, mainly olives, on which Palestinians depend.

The building of the apartheid wall has fractured and fragmented both the human and natural environments. It separates people from their fields and water sources while destroying ecosystems and restricting animal grazing, hunting lands, and paths of migration.

By placing the path of the wall deep within the West Bank and across the Green Line, Israel has captured land with abundant water sources and most fertile agricultural areas along with much of the forested area in an otherwise arid landscape. But this created unlivable conditions in the remaining Palestinian areas with significant environmental issues (e.g. fragmenting habitats for wild animals). The clearing of land for the wall has meant the uprooting of 1.5 million fruiting trees.

The Israeli military’s environmental impact includes restricting access to vast areas and also use of live ammunition exercises as well as dumping toxic waste (including nuclear and chemical waste). By closing off large areas of the West Bank for military facilities, military exercises, and forcing Palestinians from their land, the military has also forced Palestinians to overgraze what little land remains to Palestinian herders. This overgrazing has resulted in the loss of vegetation cover and thus soil erosion, with the endgame being desertification.

Palestinian water usage has been governed by Israeli law and military action since 1948 and in the West Bank and Gaza since 1967. Currently, 91% of the water in the occupied West Bank is illegally (per international law) taken by Israel. Palestinians end up using less water than what the World Health Organization recommends as enough for healthy living.3

In addition to waste and runoff from Israeli settlements, industrial areas, and military facilities, Israel imposes more waste on the occupied territory by trucking in waste from other parts of the country. For example, solid waste generated by West Jerusalem is discarded at an unsanitary dump site near Abu Dis. And, according to the Palestinian Central Bureau of Statistics, “In 2005, the number of uncontrolled solid waste dumping sites increased from 89 to 161 in the West Bank, none of which were subject to any monitoring or control by Palestinian Ministry of Health or other authorities.”

In 2012 the U.N. first reported that Gaza would be unlivable by 2020 if Israel’s siege was not fundamentally changed.4 The U.N. has repeated these fears, finding that Gaza has the highest unemployment rate in the world.5 Some two million people (two-thirds of them refugees and more than one million children) are squeezed into an open air, semi-arid prison under blockade and denied their internationally recognized rights (to water, to freedom of movement, and to most imports and exports). It is environmentally devastating and is slowly killing the population.

This is only a basic outline of how the occupation, through its many incarnations, has a negative effect on the environment and on native people in general. The situation is clearly unsustainable, and the question becomes: What is to be done?

Through the week, Kumi Now will publish and share more stories exploring how the occupation is affecting the environment, and what organizations and individuals are doing to counter those effects.

Essay contributed by the Palestine Museum of Natural History. Updated for the second edition of Kumi Now.

Story: From “Walk 2: The Albina Case” by Raja Shehadeh

The final section of the path that brought me down to the valley was narrow and overgrown with spiky shrubs. I forced my way through, scratching my skin until the path veered to the right. The walls diverged. I continued on the open path parallel to the valley. I was fanned by the soft breeze that was blowing across this open green area. To my left stretched tall grass and olive trees luxuriating in the deep rich soil. I walked along, passing the gully between the next two hills. The valley here was at its widest. Winding their way between the terraces were flocks of sheep roaming on the sides of the hills like pale yellow ribbons. I looked for the shepherd and saw that he was about to play his reed pipe. I stopped and sat on a rock for a while to listen to his pastoral tunes. Then I began walking again, trying to move as quietly as possible.

I soon got to that part of the wadi which always inspired talk when I walked with Jonathan Kuttab, my colleague in human rights at Al Haq in 1981. Far away from town, next to the dry stream between the hills, we would sit on the rock, our feet dangling in the grass … We talked of what lay ahead for us. We had both read the settlement master plan drawn up by the Jewish Regional Council in the West Bank in cooperation with the Settlement Department of the World Zionist Organization.

According to this plan 80,000 Israeli Jews were to be settled in our hills by 1986 in twenty-five settlements and twenty outposts. To make this possible two billion US dollars were to be allocated. Tons of concrete were to be poured over these hills. The plan called for paving roads at a rate of 150 kilometers a year. Every year 500 dunums (a dunum is 1,000 sq meters) of industrial zones would be developed …

The plan viewed our presence here as a constraint and aimed at preventing our ‘undesirable development.’ By creating new human settlements where none existed, connecting them with roads, and isolating existing ones, it would not only strangle our communities but also destroy this beautiful land, and in a matter of a few years change what had been preserved for centuries.”

From Palestinian Walks: Notes on a Vanishing Landscape by Raja Shehadeh

The Palestine Museum of Natural History does amazing work, and deserves your support. Help it out by doing one (or more!) of the following:

Share news of your donation or advocacy for the museum on social media. Include a link to this page of the Kumi Now website along with the hashtags #KumiNow and #Kumi23.

Literature: Multiple Quotes on the Environment

“Only a major shift in moral reasoning, with greater commitment given to the rest of life, can meet this greatest challenge of the century. Wildlands are our birthplace. Our civilizations were built from them. Our food and most of our dwellings and vehicles were derived from them. Our gods lived in their midst. Nature in the wildlands is the birthright of everyone on Earth. The millions of species we have allowed to survive there, but continue to threaten, are our phylogenetic kin. Their long-term history is our long-term history. Despite all of our pretenses and fantasies, we always have been and will remain a biological species tied to this particular biological world. Millions of years of evolution are indelibly encoded in our genes. History without the wildlands is no history at all.”

From Half-Earth: Our Planet’s Fight for Life by Edward O. Wilson.

“Until we have the courage to recognize cruelty for what it is … we cannot expect things to be much better in this world … We cannot have peace among men whose hearts delight in killing any living creature. By every act that glorifies or even tolerates such moronic delight in killing we set back the progress of humanity.”

We have a YouTube playlist with videos about the environmental effects of occupation.