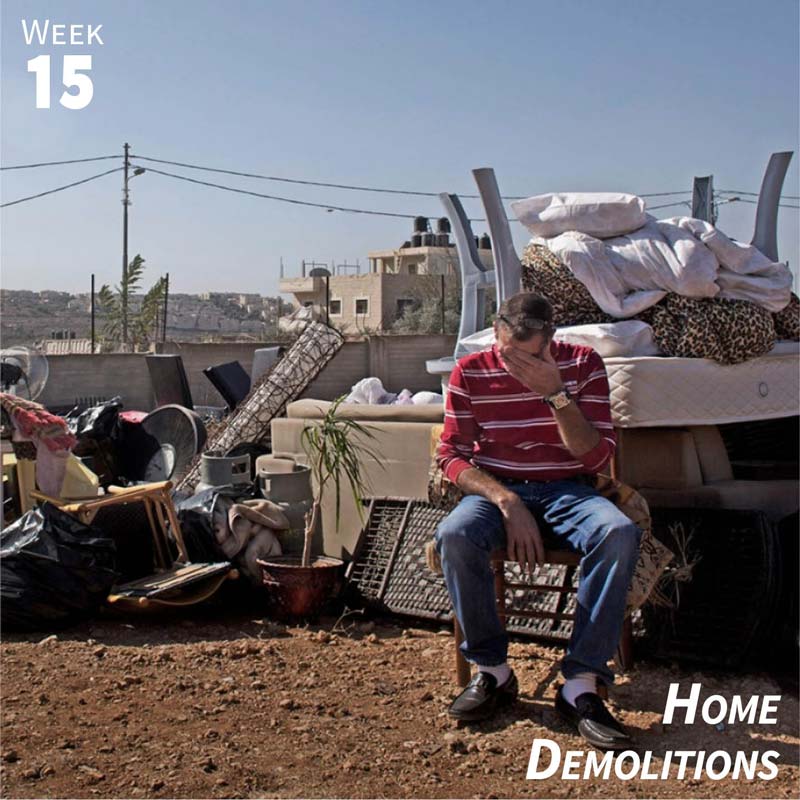 Having a home and a safe place for your family to live in is one of the most vital parts of life. This is the place where you welcome friends, share food, and feel loved. It is where you eat and sleep, talk, and laugh. It is the place where children utter their first words, take their first steps, and gradually learn to care for others as they have been cared for. The home is the center of most people’s worlds. The loss of a home strikes at the very core of our being.

The use of violence, demolitions, and psychological warfare to force and scare Palestinians into leaving their homes and villages go back to the roots of the conflict. In 1948, operations such as the Deir Yassin massacre, which occurred April 9, destroyed whole villages and forced others to flee. While Israel’s current home demolitions avoid much of the physical violence of those early operations, they still maintain the psychological elements, attempting to physically force them from their homelands and disincentivizing them from staying in their villages. This week, the Kumi Now community is uniting to end home demolitions. Here’s what you need to know and what you can do so that together we can rise up.

Palestinians in the occupied territory live under threat of one of the most pernicious of collective punishments: home demolitions. Israel gives these demolitions a veneer of legitimacy by enforcing building permits that are nearly impossible to get in the first place.

The demolition of Palestinian homes represents a primary expression of displacement. In the Nakba of 1948, over 750,000 Palestinians (64% of the entire population) were made homeless. Israel systematically demolished more than 530 entire Palestinian villages, towns, and urban neighborhoods (around 60,000 homes). Since then it has continued to demolish Palestinian homes within Israel. For example, the entire Bedouin community of al-Araqeeb in the Naqab has been demolished 176 times and counting). Israel has also demolished almost 50,000 homes in the occupied Palestinian territory since 1967.
The motivation for demolishing Palestinian homes is purely political, although the Israeli authorities employ an elaborate system of laws and administrative procedures to lend it a proper facade. Here are some of the reasons given by the Israeli authorities for demolition:

Most people think that Palestinian houses are demolished because their inhabitants performed an act against the occupation. This is not the case. In fully 99% of the cases, demolitions had absolutely nothing to do with security; they are done almost exclusively as forms of displacement.

The actual demolition of homes is only part of the story, of course. Tens of thousands of Palestinian families own land and possess the financial resources to build modest homes but do not do so because they cannot obtain permits and do not want to risk demolition. In the Palestinian sector of East Jerusalem alone there are 25,000 “missing” housing units. This completely artificial and induced housing shortage condemns thousands of families to crowded and inadequate living conditions. Again, this is part of what Israel calls “the quiet transfer,” making life so difficult for the Palestinians that they will leave the country altogether.

House demolitions take two major forms. Tens of thousands of Palestinian homes have been destroyed as collateral damage in military incursions. In the carpet bombing of Gaza in 2014, some 18,000 homes were demolished-and never rebuilt. Additional thousands have been demolished because Israel refuses to grant building permits to Palestinians, even if they plan to build on their own land. Since having a home is a fundamental human right and people have children and grandchildren, Palestinians are forced to build “illegally,” and are promptly served with demolition orders. The Israeli authorities can demolish your home tomorrow morning, next week, next year or in 20 years. And if you rebuild, your home will be demolished again. Demolition orders, like diamonds, are forever.

When the bulldozer finally begins its systematic work of demolition, the whole process takes between five minutes (for a small home of concrete blocks) to six hours (for a five-story apartment building). At times demolition is resisted amidst violence; people are beaten, jailed, sometimes killed-and always humiliated. At other times the family and their neighbors watch sullenly as their home is reduced to rubble.

For children, the act of demolition—and the months and years leading up to it—is a time of trauma. Children are marked for life when they have to witness the fear and powerlessness of your parents; feel constantly afraid and insecure; see loved ones being beaten and losing their homes; experience the harassment of the Israeli Civil Administration field supervisors speeding around their village; and endure the noise, violence, displacement and destruction of their toys, home, and world. Psychological services are largely absent in the Palestinian community and there are many signs of trauma and stress among children: bedwetting, nightmares, fear to leave home lest one “abandon” parents and siblings to the army, and dramatic drops in grades and attendance. The effects of exposure to domestic violence that occasionally follow impoverishment, displacement, and humiliation are also observed. In the words of Salim Shawamreh, a resident of the village of Anata whose home has been demolished four times: “The demolition of a home is the demolition of a family.” According to the research of Eyad Serraj, the late Palestinian psychologist who headed the Gaza Community Mental Health Program, a strong correlation exists between young people who become suicide bombers and those who have had their homes demolished.

Through the week, Kumi Now will publish essays and stories from different organizations further exploring this topic and highlighting what they are doing to stop home demolitions.

Essay, and following story, contributed by ICAHD. Updated for the second edition of Kumi Now.

When the dreaded day finally arrives, it does so almost without warning. Though families know their homes are targeted, actual demolitions are carried out at random, without pattern, and can strike anywhere at any time. (Normally demolitions do not occur on Fridays or Saturdays due to the Jewish Sabbath, or on Jewish holidays. These are the only times Palestinians can truly relax-an ironic twist on the idea of the “Day of Rest.”) Randomization is part of the generalized fear that underlies the policy of “deterrence.” The wrecking crews, accompanied by tens of soldiers, police and Civil Administration officials, usually come in the early morning hours just after the men have left for work. The family is sometimes given a few minutes to remove their belongings before the bulldozers move in. However, because family members and neighbors usually put up some kind of resistance—or at least protest—they are often removed forcibly from the house. Their possessions are then thrown out by the wrecking crews (often foreign guest workers). Amnesty’s report Under the Rubble (2004:4) relates the story of As’ad Mu’yin and his cousin Ziad:

On August 21, 2003, on the morning of his wedding, As’ad Mu’yin had his house demolished; the house of his cousin Ziad As’ad, who had married a week earlier, was demolished at the same time. The two adjacent houses were in the West Bank town of Nazla ‘Issa. As’ad Mu’yin had been living on the ground floor of the house with his parents and three brothers and had furnished and prepared the second floor to move in with his wife. The house was demolished before he could do so. The new furniture and the wedding gifts disappeared under the rubble, along with the content of the family home on the ground floor. He told Amnesty International: “The army came early in the morning, at about 7am. I was getting ready for the wedding, for a very happy day. They had bulldozers … they gave us 15 minutes to leave the house. We had no time to salvage anything. They said that we did not have building permits. … But everyone knows that Israel does not give building permits to Palestinians in Area C.”

Is your local community supporting the occupation with your tax money? The Israeli government makes use of equipment from Caterpillar, Volvo, Hyundai, and JCB to carry out home demolitions in the occupied Palestinian territory. You can find evidence of this using a Google image search.

Send a letter to your mayor and city council. Use language similar to the following: “Caterpillar, Volvo, Hyundai, and JCB all supply the Israeli government with equipment that is used for the demolition of Palestinian homes. These are demolitions that have been ruled illegal under international law. Does your department purchase equipment from any of these companies that profit from the Israeli occupation? Please cancel any contracts with these companies and refuse to do business with them until they stop supplying the Israeli government. We should not support companies that knowingly profit off of illegal activity.”

While it is good to send these messages directly to your government offices and officials, we can amplify the scrutiny of these agencies by also making these messages public, tweeting your questions to them and posting your questions to their Facebook pages. Remember to tag your local official or agencies and Include a link to this page of the Kumi Now website along with the hashtags #KumiNow and #Kumi15.

Literature: “The House as Tragedy” by Mahmoud Darwish

In one minute the entire life of a house is ended. The house as casualty is also mass murder, even if it is empty of its inhabitants. A mass grave of raw materials intended to build a structure with meaning, or a poem with no importance in time of war. The house as casualty is the severance of things from their relationships and from the names of feelings, and from the need of tragedy to direct its eloquence at seeing into the life of the object. In every object there is a being in pain-a memory of fingers, of a smell, an image. And houses are killed just like their inhabitants. And the memory of objects is killed: stone, wood, glass, iron, cement are scattered in broken fragments like living beings.

And cotton, silk, linen, papers, books are torn to pieces like proscribed words. Plates, spoons, toys, records, taps, pipes, door handles, fridges, washing machines, flower vases, jars of olives and pickles, tinned food all break just like their owners. Salt, sugar, spices, boxes of matches, pills, contraceptives, antidepressants, strings of garlic, onions, tomatoes, dried okra, rice and lentils are crushed to pieces just like their owners. Rent agreements, marriage documents, birth certificates, water and electricity bills, identity cards, passports, love letters are torn to shreds like their owners’ hearts. Photographs, toothbrushes, combs, cosmetics, shoes, underwear, sheets, towels fly in every direction like family secrets broadcast aloud in the devastation. All these things are a memory of the people who no longer have them and of the objects that no longer have the people-destroyed in a minute. Our things die like us, but they aren’t buried with us.

From A River Dies of Thirst by Mahmoud Darwish, who is regarded as the Palestinian national poet.