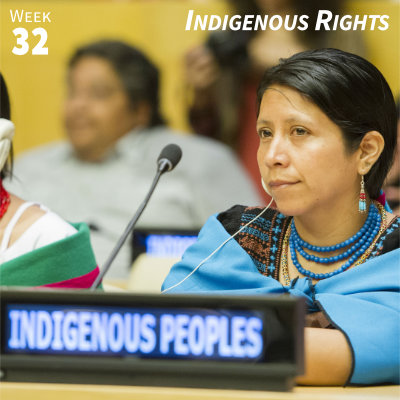 call: “On this annual observance, let us commit to fully realizing the United Nations Declaration on the Rights of Indigenous Peoples, including the rights to self-determination and to traditional lands, territories and resources.” We look at how indigenous populations around the world are struggling for their rights and what you can do so that Palestinians and all indigenous peoples can rise up.

In 1982 the United Nations officially took on the role of protecting the rights of indigenous peoples with the creation of the Working Group on Indigenous Populations. While calls to protect the rights of indigenous peoples go back centuries, there was little that could be done against the powers of colonialism. The Working Group was a major step forward in terms of post-colonial thought, and the work of the United Nations culminated with the adoption of the Declaration on the Rights of Indigenous Peoples in 2007.

The declaration is several pages long and, like the UN Declaration of Human Rights, is worth reading in full. However, some of its most critical rights, when looked at from the perspective of Palestinians, include:

These articles and others are clearly relevant to Palestinians both in Israel and in the occupied territory and resonate with many of the themes in this book, from the right to return, to attempts to preserve Palestinian culture and history, to the forced relocation of Bedouin villages, to the stigma of being denied a passport, to discrimination in education funding and policy, and to the stealing of Palestinian lands and resources.

Of course, a major question left unanswered by the declaration is “Who qualifies as an indigenous people?” Any attempt by Palestinians to assert there rights as an indigenous people (or peoples) is likely to be met with Jewish Zionist claims that Jews are, in fact, the indigenous people of the land. While no United Nations body has adopted an official definition of indigenous, “the system has developed a modern understanding of this term based on the following:

Indeed, 20th-century history is full of evidence to establish Palestinian claims of indigenous status: Jews settling in Palestine always saw non-Jews living on the land not as just fellow citizens with disagreements regarding religion and politics, but as a separate people living on a land that they wanted. As conflicts continued, it was not an internal conflict of a people against itself, but of one people in conflict with another.

The Nakba and its consequences, including the dispossession of families and their homes, the seizure of their land, their forced exile, the denial of their history, and erasure of their culture, are shockingly similar to the experiences of other indigenous peoples around the world, such as those of many tribes of Native Americans, Aboriginal Australians, the indigenous tribes of Taiwan, and the First Nations of Canada.

In all of these situations and many others, it is not the status of the conqueror that is of consequence, but the treatment of the indigenous peoples that determines whether they are being provided with their rights as indigenous peoples. In short, the conveying of indigenous rights is not a competition based on years of history nor the size of a population.

In the 21st century, as the challenges of climate change and sustainable development more adversely affect indigenous peoples and poorer nations, it is critical that their voices are heard and their rights granted. Given these struggles for indigenous rights around the globe, this week is not just about the struggles of Palestine. Through the week, Kumi Now will publish essays and stories from organizations around the world, bringing attention to the challenges facing other indigenous peoples, and working to build connections between indigenous groups, so that together they may stand up to the governments and corporations standing in the way.

Story: From Our History Is the Future: Standing Rock Versus the Dakota Access Pipeline, and the Long Tradition of Indigenous Resistance by Nick Estes

At camp, the smell of campfire brought us back to another world—an older world, an Indigenous world always thought to be on the brink of extinction, a place at once familiar to Native peoples and radically unfamiliar to settlers. In the twilight hours, Water Protectors told stories and shared the prophetic visions of a better world, not just in the past, but one currently in the making, as purple-grey smoke filled the spaces between tipis, tents, and lines of cars and trucks.

The camps had attracted Indigenous and non-Indigenous people from across North America. On my first day in camp, in August, I dug compost holes with my Ojibwe relative Josh—a cook from Bismarck—and built a cook shack at the camp’s main kitchen with my Diné relative Brandon and a Palestinian network administrator, Emad, from Yankton, South Dakota—himself a refugee from the US-backed Israeli colonization of his homelands. My Palestinian comrade Samia once called our sacrosanct duty at camp an “intifada on the plains,” because she saw it as an uprising against the same occupier. The cook shack, pieced together with genuine solidarity and gnarly fallen trees, survived a brutal Northern Plains winter and helped feed thousands …

Politicians and media attempted to play up divisions in the camps, depicting white Water Protectors as “hippies” who treated the movement like “Burning Man.” Those elements existed, and some Native people played along. But such portrayals gloss over meaningful solidarities. For example, our national camp, Kul Wicasa, welcomed everyone. Our camp’s leader, my friend and Tahansi (cousin) Lewis Grassrope, helped create the Oceti Sakowin Horn, inviting not only Indigenous, but also non-Indigenous peoples to participate …

There were no television cameras or social media live streams, and there was no Mark Ruffalo. But now the world had come to #NoDAPL. A white woman named Maria, a local reporter and a friend from Chamberlain, embedded herself in the camp as a cook, feeding thousands. Abe, a white military veteran from Colorado, ran our camp security. In Chicago, my comrades Kofi from #BlackLivesMatter and Renae, a Nuu-chah-nulth revolutionary socialist, led solidarity delegations. And there were many more.

Political elites and corporate media have frequently depicted poor whites and poor Natives as irreconcilable enemies, without common ground competing for scarce resources in economically depressed rural areas. Yet, the defense of Native land, water, and treaties brought us together. Although not perfect, Oceti Sakowin camp was a home to many for months. And the bonds were long lasting, despite the horrific histories working against them.

Excerpted from Our History Is the Future: Standing Rock Versus the Dakota Access Pipeline, and the Long Tradition of Indigenous Resistance by Nick Estes.

Read and study the U.N. Declaration on the Rights of Indigenous Peoples. You can find a copy in your language at https://www.un.org/development/desa/indigenouspeoples/declaration-on-the-rights-of-indigenous-peoples.html.

Choose your favorite passages from the document and think of creative ways to share them, whether on posters or as part of photo collages online, etc.

Share whatever you do on social media. Include a link to this page of the Kumi Now website along with the hashtags #IndigenousRights, #KumiNow, and #Kumi32.

Who was it fractionally moved the vase
and was here in the room in my absence?
And the picture of the slain knight on the wall
someone has tampered with it.
My papers show disorderly edges
from a hurried reading.
I never leave my pillow this way
nor the abandon of a soiled shirt.

Who was it visited my room with me
away, who can it be?
What new assertion of calm will restore the vase to its place?
What reconciliation impose on the dead knight
his old demeanor, his symmetry on the blank wall

What will restore to my pillow and my shirt
the aroma of the citizen?

By Waleed Khazindar, a Palestinian poet of the diaspora. Translated by Adnan Haydar and Jeremy Reed and published in Anthology of Modern Palestinian Literature, edited by Salma Khadra Jayyusi.