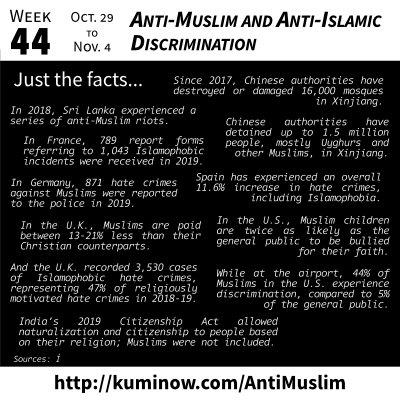 We suggest you also read CAIR’s“Islamophobia 101” and watch the Ted Talk “Islamophobia killed my brother. Let’s end the hate” by Suzanne Barakat and the TRT World news report “2020 marked by rising anti-Muslim rhetoric”. If you want a broad introduction to Islamophobia with a philosophical background (and a lot of caustic humor) you can watch “Islamophobia: An Analysis” from Philosophy Tube.

To go deeper, we will be developing an extensive list of Additional Resources at the bottom of this week’s entry as well as a YouTube playlist on the subject