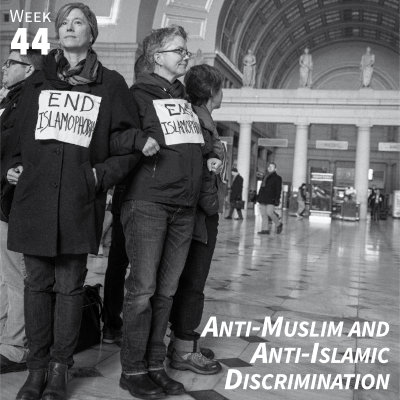 The constant slings and arrows inherent in the Israeli occupation of the Palestinian territory have all the markings of anti-Muslim and anti-Islamic discrimination. While not all Palestinians are Muslims, and the overwhelming majority of Muslims have never engaged in any kind of violence, the overarching view in Western media of Palestinians as Muslim terrorists has done nothing to build global support for the anti-colonial struggles of the Palestinians in a way that the world supported the struggles in Ireland, India, and South Africa. Here’s what you need to know about Islamophobia and what you can do so that together we can rise up.

Let us begin by defining anti-Muslim and anti-Islamic discrimination, or islamophobia. We use as our guide Council on American-Islamic Relations’ (CAIR) online document “Islamophobia 101.” Here is how CAIR defines islamophobia:

In short, Islamophobia is anti–Muslim racism.

At length, Islamophobia is a fear, hatred, or prejudice toward Islam and Muslims that results in a pattern of discrimination and oppression. Islamophobia creates a distorted understanding of Islam and Muslims by transforming the global and historical faith tradition of Islam, along with the rich history of cultural and ethnic diversity of its adherents, into a set of stereotyped characteristics most often reducible to themes of violence, civilizational subversion, and fundamental otherness. Islamophobia must also be understood as a system of both religious and racial animosity that is perpetuated by private citizens as well as cultural and political structures.

The perpetrators of anti-Muslim and anti-Islamic discrimination can either be individual citizens or government or military officials, or Islamophobia can be embedded in company, organizational, or governmental structures and policies.

At the individual level, this dicrimination consists of violence against Muslims or perceived Muslims in the form of physical intimidation and assault and verbal stereotyping, intimidation, abuse, and hate speech. And it extends to the vandalizing of individual property and the property of Islamic institutions including mosques, Islamic schools, and Muslim cemeteries.

At an institutional level it includes discrimination in employment (where Muslims are faced with unequal opportunities), discrimination in the provision of health services, exclusion from managerial positions and jobs of high responsibility, racial profiling by law enforcement, and exclusion from political and governmental posts. It can be seen in legislation and policy measures that overtly or covertly targets muslims at the exclusion of other religious or social groups. Finally, anti-Muslim and anti-Islamic discrimination also comprises prejudice in the media, literature, and everyday conversation.

Where does it occur?

Islamophobia is well documented in the United States, France, Denmark, Israel, and across Europe, but occurs in every country with a Muslim minority.

Where does it come from?

How is it changing?

Sharp increases in such hate crimes seem to have begun in the early 2000s. This rise could be attributed to the growing number of anti-Muslim and anti-Islamic institutions and the normalization of hostility towards Islam. And the ease with which information travels in the age of Twitter takes an act from its local context to the international arena, thus creating an impression that there is a universal anti-Muslim and anti-Islamic ethos and emboldening other would-be Islamophobes.

Over a decade on, and in light of continuing immigration from North Africa and the Middle East and the rise of right wing parties across the EU, the situation is only worse. In 2018 the Foundation for Political, Economic and Social Research (SETA) released their “European Islamophobia Report” for 2017. In it, they provide a big picture of discrimination across Europe, and include a number of concerning statistics, including:

In England and Wales the Home Office reported that in 2018 “hate crime has rocketed by 40 percent in a year across England and Wales, as the number of offenses recorded hits a record high” while “more than half of religiously-motivated attacks in 2017–18 were directed at Muslims and the next most commonly targeted group was Jewish people.” Overall, the number of hate crimes “more than double the total five years ago—and all categories saw a rise.”

Islamophobia and the Palestinian Question

A consistently anti-Muslim and anti-Islamic propaganda is being used against the Palestinian people to prevent them from ending the Israeli occupation.

When it comes to the question of Palestine, there are three major misconceptions that get in the way of real support for Palestine and the end to occupation:

When looked at through the lens of anti-Muslim and anti-Islamic stereotypes, Professor Mustafa Abu Sway argues, “Only enemies of peace would continue to be against an end to the Israeli occupation. To be against the establishment of a Palestinian state could be described as an essentially Islamophobic position.”

Throughout the week, Kumi Now will publish essays and stories from different organizations further exploring the rise and effects of anti-Muslim and anti-Islamic discrimination and highlighting what they are doing to stop it.

“What was the problem?” I asked her in Arabic.

She looked at me in shock. That often happens when I speak Arabic.

“I’m Jewish, I just happen to speak a bit of Arabic. Are you okay?”

“Yes, it’s because I’m religious, I wear the niqab. I get stopped every time.” Then, she switched to almost flawless English. “I am only coming into the West of the city because I have a daughter with disabilities, and I come here to arrange aspects of her care. Otherwise, I would not come here. This harassment is so unnecessary.”

What are you supposed to say to that? I couldn’t give her advice or fix the problem; she is a Palestinian woman and she will be harassed by male Israeli soldiers, security guards, and police likely for the rest of her life.

“I’m sorry. I know that doesn’t help, but I’m Jewish and I’m sorry. I hope you have a good rest of your day.”

She was so calm, so powerful in her forceful conviction and relaxed demeanor. So often, we just assume that Muslim women in hijab or niqab must be submissive or meek. Not so.

Make it a point this week to reach out and make these connections:

Share the video of the poem (below) on social media, along with an explanation of how you are reaching out against Islamophobia. Encourage others to do likewise, and include a link to this page of the Kumi Now website along with the hashtags #Islamophobia, #KumiNow, and #Kumi44.

Literature:  “This is Not a Humanizing Poem” by Suhaiymah Manzoor-Khan

From “This is Not a Humanizing Poem” by Suhaiymah Manzoor-Khan. Suhaiymah is a Muslim woman poet from Pakistani heritage known for her writing, plays, and spoken-word. You can watch her performance here.