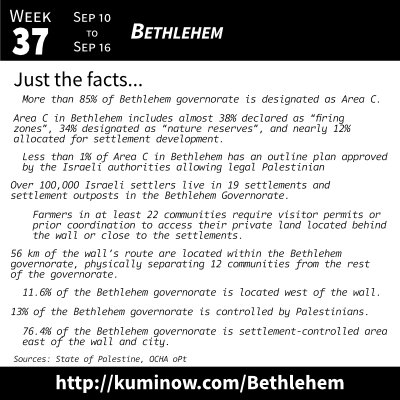 To learn more about Bethlehem, we suggest you read ​“In Bethlehem, I had a vivid experience of what Israel’s occupation feels like” by Ghada Karmi for Middle East Eye and “Christmas in Bethlehem: Controlling the narrative through tourism” by Megan Giovannetti for Al Jazeera. And you can watch “Bethlehem — Hidden From View” from ARIJ Institute. To go deeper, we will be developing an extensive list of Additional Resources at the bottom of this week’s entry as well as a YouTube playlist on the subject.