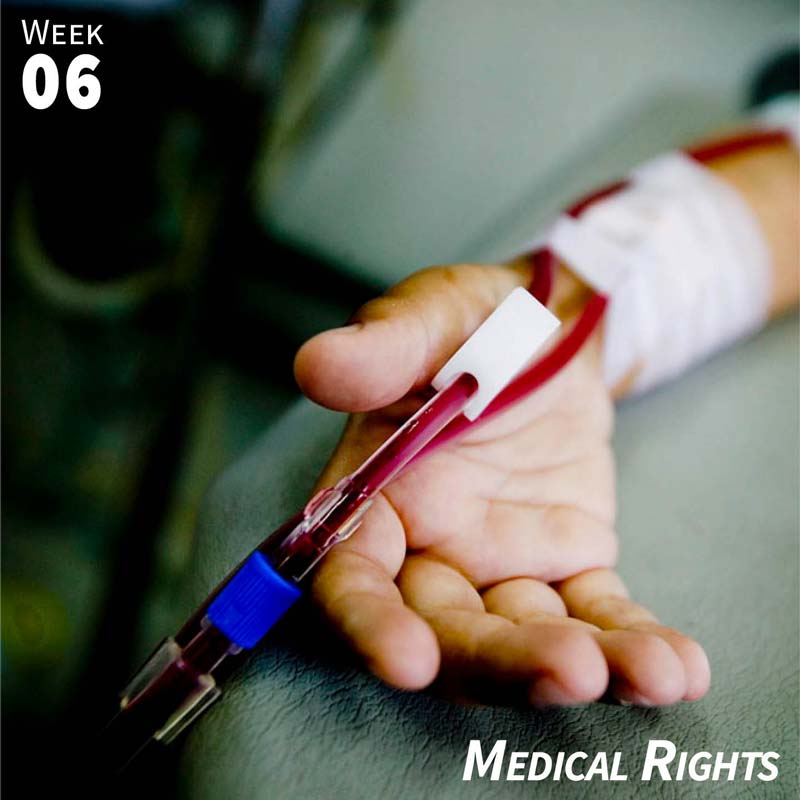 The blockade of Gaza is a noose around its neck. One of the worst impacts of that noose is the denial of patients’ rights to travel within Palestinian territory for treatment, which is not available in Gaza. As a result, 54 patients died awaiting permission to travel for medical treatment in 2017. Begun in 1994 by the Catholic Church, the World Day of the Sick, observed every February 11, is a day for turning our attention and aid to those suffering from sickness. Join the Kumi Now community and learn about the medical blockade of Gaza and what you can do so that together we can rise up.

Israel requires Gazans to obtain military permits to receive medical care outside of Gaza, whether that be in other parts of Palestine (the West Bank including East Jerusalem), Israel, Egypt, or other countries. The record-low rate of permits issued by Israel in recent years underlines the urgent need for Israel to end its decade-long closure of the Gaza Strip. And record-high delays by the Palestinian Authority (PA) in 2017 in issuing approvals to travel and Egypt’s continued closure of the Rafah border crossing with Gaza have further restricted movement and caused additional suffering.

Israeli authorities approved permits for medical appointments for only 54 percent of those who applied in 2017, the lowest rate since at least 2008. The World Health Organization (WHO) reported that 54 Palestinians, 46 of whom had cancer, died in 2017 following denial or delay of their permits.

“We’re seeing Israel increasingly deny or delay access to potentially life-saving cancer and other treatment outside Gaza, with shockingly high numbers of Palestinian patients subsequently dying, while Gaza’s healthcare system-subjected to half a century of occupation and a decade of blockade-is decreasingly able to meet the needs of its population,” said Aimee Shalan, CEO of Medical Aid for Palestinians.

Travel through the Erez Crossing, Gaza’s primary crossing, is limited to what the Israeli military calls “exceptional humanitarian cases” and prominent businesspeople. The steady decline in Israel’s issuance of medical permits, from 92 percent approval of applications in 2012 to 54 percent in 2017, indicates that Israel has increasingly restricted travel even for “exceptional humanitarian cases.” In 2017, travel via Erez was less than 1 percent of the travel recorded in September 2000 and Palestinians from Gaza missed at least 11,000 scheduled medical appointments in 2017.

The significant decline runs counter to the ever-increasing health needs in Gaza. Gaza’s 2 million people endure what the U.N. labels “a protracted humanitarian crisis.” Amid widespread poverty and unemployment, at least 10 percent of young children are stunted by chronic malnutrition, up to half of all medicines and medical items in Gaza are depleted or below one month’s supply, and chronic electricity shortages have caused officials to cut health and other essential services.

“It’s unconscionable that Israel prevented so many critically ill people from accessing care that might have saved their lives,” said Sarah Leah Whitson, Middle East director at Human Rights Watch. “Israel’s continued control over movement into and out of Gaza creates obligations to facilitate—not thwart—humanitarian access.”

Palestinians in Gaza require referral permits to access the more advanced health care in East Jerusalem and elsewhere in the West Bank, as well as in Israel. The Israeli authorities state that they can process priority permits in one day, although the typical waiting time averages two weeks, while “regular” cases require 23 days, and often fail to meet this timetable.

The WHO has deemed the ensuing process “neither transparent nor timely,” and the U.N. coordinator for humanitarian aid and development activities in the occupied Palestinian territory has stated that a “minefield of interviews, paperwork, opaque procedures, and logistical hurdles stand between a cancer patient and his or her urgent treatment.”

Issam Younis, director of Al Mezan, argues, “The Israeli government’s restrictions on movement are directly connected to patient deaths and compounded suffering as ill patients seek permits. These practices form part of the closure and permit regime that prevents patients from a life of dignity and violates the right to life.” As such, “The closure system must be abolished so that patients have safe access to healthcare in Palestinian hospitals in the occupied Palestinian territories and elsewhere. The victims and their families must have their right to justice and redress upheld.”

Al Mezan saw no improvements in 2018 as it faced yet another peak in its case load, having to assist over 500 patients denied their medical rights. Also, in 2018, they played a leading role in three High Court petitions demanding access to medical care for residents of Gaza. While the petitions have been successful, they were not able to alter the specific policies that denied patients’ timely access to medical care. As a result, Al Mezan and their partners, including Adalah, Gisha, and PHRI, went to court to challenge new obstacles added by the Israeli government that denied more and more people access to medical care.

Yara Bkhit was four years old when she was diagnosed with chronic heart failure. She died about six months later, in July 2017. Her parents filed an application to enter Israel in order to receive treatment at al-Makassed Hospital in East Jerusalem. The permit was granted, and Yara underwent cardiac catheterization. Another application filed by her parents, for continued treatment, was not approved. They made other requests, but their daughter passed away while they waited for their fourth application to be approved.

Yara’s mother, Aishah Hasunah, 28, spoke to B’Tselem field-researcher Olfat al-Kurd on July 17, 2017 about what the family went through after Yara was diagnosed:

“Last January, Yara started vomiting frequently. She vomited for about a week and became dehydrated. I took her to the doctor, and she underwent a series of tests. The doctors couldn’t tell us with certainty what was wrong with her, and referred us to the European Hospital in Khan Yunis. The doctors there discovered that her heart muscle was weak.…

“The doctors decided she should be transferred to al-Makassed Hospital in Jerusalem because of her serious condition. They said they didn’t have the resources to treat her illness. She got a referral for the hospital in Jerusalem, but the first application we made to Israel was denied. We made another appointment for February 16, 2017, and filed another application to Israel. This time, we put down my grandmother as the person accompanying. The application was approved.… My heart tore apart when I said goodbye to my daughter. I couldn’t even go to Erez Crossing with her, because I was afraid she’d start crying and grab hold of me, and that would make her condition even worse.

The whole time she was in the hospital in Jerusalem, Yara wouldn’t talk to me or her father on the phone, because she was sure we’d abandoned her. I felt my heart crushing from the pain and from missing her voice. My grandmother also told me on the phone that Yara was having a hard time accepting her. She didn’t know her well and wasn’t used to her. She refused to eat or go to the bathroom with my grandmother, which made her physical and emotional state worse.…

“My daughter stayed in the hospital for a few days, during which she underwent catheterization.…

“Two weeks later, she was released from the hospital, but she didn’t get better, and she went back to the hospital for a few weeks at a time, until last June. In June, the doctors decided her condition was critical and got her a new referral, again with my grandmother accompanying her, to al-Makassed Hospital. The hospital gave her an appointment for June 21, 2017. A week before the appointment, we got a message on the cell phone that the application was still under review. Other than that, there was no response. Her father and I didn’t know what to do. My little girl had done nothing wrong, nothing that could justify denying her medical treatment. My mental state continued to get worse.
Yara’s condition got worse by the day. One day, she had shortness of breath and started suffocating. I rushed her to the European Hospital in Khan Yunis, and they discovered her kidneys had stopped working. She stayed in hospital, and in early July, the doctors gave her a fourth referral to al-Makassed because her condition was very serious. They said she needed to be fitted with a battery that would regulate her heart rate, and that there were no batteries like that in Gaza.…

“On Wednesday, July 12, 2017, the day before she died, Yara asked me for gummy candies. I rushed to the grocery store, got the candy and fed it to her. I was so happy to see her eating, and that I’d managed to give her something she’d asked for. The next morning, at around 6:45 A.M., Yara asked to eat by herself, but she couldn’t do it, so she said, ‘Mama, feed me.’ She lifted her head, and I laid it against the pillows. As I was feeding her, she turned her head to the left, with the food still in her mouth, and suddenly stopped breathing.
Doctors and nurses came in and took her to another room. They hooked her up to a respirator, but she passed away. When I heard the news, I started screaming and crying and fainted. I can’t describe the feeling. I said goodbye to part of my heart. Yara is gone and she’ll never come back.”

Have a local dentist, doctor, or medical care facility you love? Let people know, and simultaneously raise awareness of the situation in Gaza. Write a review of your favorite medical facility or practitioner on Google Maps or another review platform. Give them full stars. At the end of your review, include a message like “I am lucky to have easy access to the medical services and facilities I love and need. Residents of Gaza have no such luck as Israel denies medical care to cancer victims: https://www.btselem.org/video/20170215_gaza_prog_helps_cancer_patients.”

Share a photo of your message on social media. Include a link to this page of the Kumi Now website along with the hashtags #OpenGaza, #KumiNow and #Kumi6.

It is important to understand what life is like in Gaza when Israel’s behavior is “restrained,” … A good sense is given in a report to the United Nations Relief and Works Agency (UNRWA) by Mads Gilbert.… In every respect, the situation is disastrous. Just keeping to children, Gilbert reports: “Palestinian children in Gaza are suffering immensely. A large proportion are affected by the man-made malnourishment regime caused by the Israeli imposed blockage. Prevalence of anaemia in children under 2 years in Gaza is at 72.8 percent, while prevalence of wasting, stunting, underweight have been documented at 34.3 percent, 31.4 percent, 31.45 percent respectively.” And it gets worse as the report proceeds.

When Israel is on “good behavior,” more than two Palestinian children are killed every week, a pattern that goes back over fourteen years. The underlying cause is the criminal occupation and the programs to reduce Palestinian life to bare survival in Gaza, while Palestinians are restricted to unviable cantons in the West Bank and Israel takes over what it wants, all in gross violation of international law and explicit Security Council resolutions, not to speak of minimal decency. And it will continue as long as it is supported by Washington and tolerated by Europe-to our everlasting shame.

By Noam Chomsky, an American theoretical linguist and political activist who is considered to be the “founder of modern linguistics.” From On Palestine by Noam Chomsky and Ilan Pappe.