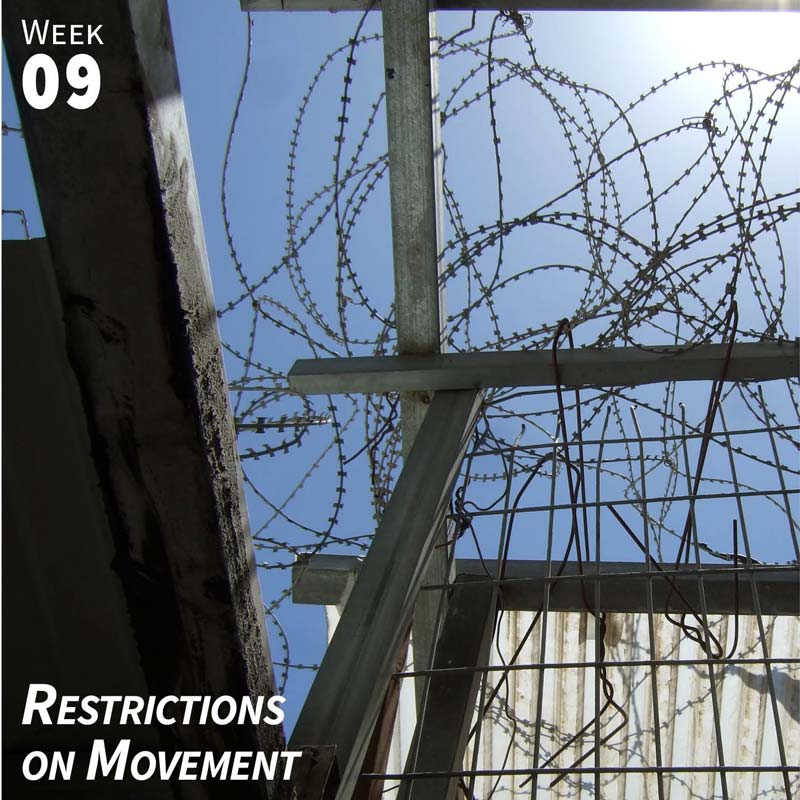 The checkpoints throughout the occupied Palestinian territory control and choke the lives of Palestinians. In 2014, UNAIDS declared March 1 as Zero Discrimination Day. Michel Sidibé, Executive Director of UNAIDS, stated in 2019 that, “Laws must protect, not cause harm. All countries must carefully examine their laws and policies in order to ensure equality and protection for all people, without exception.” For Palestinians faced with the daily humiliations and delays caused by the checkpoints, we must shed light on the restrictions of movement for Palestinians within Palestine. Here’s what you need to know and what you can do so that together we can rise up.

More than 500 permanent checkpoints and roadblocks limit the movement of Palestinians within and out of the West Bank, while hundreds of more temporary checkpoints, also called flying checkpoints are set up each month. More than 70,000 Palestinians must move through these checkpoints on a daily basis to access their jobs and their own land. Severe restrictions on movement in the West Bank began after the First Intifada, while construction of the apartheid wall began during the Second Intifada. The construction of settlements and settlement roads have further cut up Palestinian lands and limited how Palestinians can get from one point to another, even within their own country.

MachsomWatch, in their Kumi Now entry, describes the daily experience and economic impact of the checkpoints:

“Tens of thousands of Palestinians cross through the checkpoints every day. At dawn, the large checkpoints are very crowded; passage is slow and very controlled, requiring people to wait in line for several hours so that they can reach their transportation on the Israel-facing side by morning. Passage through the checkpoints requires permits issued by the military administration for employment, medical reasons, education, and so forth. In addition, in about 25 villages in the central part of the West Bank, Palestinians are compelled to cross through agricultural gates to reach their lands trapped on the other side of the ‘Security Barrier.’ Difficulties in obtaining permits, or the issuing of a permit for only one family member has led many Palestinians to cease cultivation of lands, leading to their confiscation by the Israeli authorities.”

And while it is easy to focus on the huge economic impacts of the checkpoints, the fundamental problem of the checkpoints is that they undermine the basic human rights of Palestinian. Christian Peacemaker Teams highlights these abuses in their entry on checkpoints:

“CPT constantly monitors the Israeli military checkpoints (Qitoun, Salaymeh, and al-Ein Humrah) each school morning as children and teachers pass through. Due to the fortification of the checkpoints it is difficult to see what happens inside, but CPT knows that school bags, women’s handbags, IDs, and body checks take place on a frequent basis. These checkpoints are in violation of the right to education as stated in Article 26 of the Universal Declaration of Human Rights.

“Every Friday, CPT monitors the three military checkpoints situated outside the Ibrahimi mosque as people walk through for prayers. The same checks as listed above occur at these checkpoints each Friday. These restrictions, along with the daily abuse and intimidation that accompany them, are in violation of Article 18 of the Universal Declaration of Human Rights, which states, ‘Everyone has the right to freedom of thought, conscience and religion.’”

While Israel claims that the checkpoints are a matter of security, the truth is that the construction of the checkpoints has not reflected the security situation in Israel. Instead, the checkpoint system continues to grow along with the continued development of settlements and settlement roads (see Week 8) and the exploitation of Palestinian natural resources (see Week 12). With no realistic hope of Israeli changing course, and the world community proving ineffective at opposing Israeli incursions, it is left to organizations such as MachsomWatch and CPT to monitor and report checkpoint abuses, hoping that Israel and the world will see what is truly happening.

Throughout the week, Kumi Now will publish essays and stories from these and other organizations further exploring this topic and highlighting what they are doing to document the effects and abuses of the checkpoints.

Hassan, the principal of the Ibrahimi Basic Boys school in al-Khalil, shared with Christian Peacemaker Team how checkpoints and the constant presence of Israeli military affects education. Every morning Hassan and a few teachers stand outside Qitoun checkpoint to make sure the students get through safely:

“The Israeli border police, they all know us. However, they still check me and the teachers each day. One time when I was walking through the checkpoint a border police officer ordered for my ID. I said ‘You know me. I pass here everyday. You know I am the principal.’”

Despite working as the principal of Ibrahimi school for the last four years, crossing the same checkpoints every day, Hassan is still ordered to show his ID, empty his pockets, remove his belt, and sometimes his shoes. His staff and teachers at the school face the same issues. All of this happens in front of the students:

“Firstly, I have told them (border police) before that if they close the turnstiles at the checkpoints, it could create problems. Secondly, I’ve asked them if these children were their brothers or sisters, would they feel okay delaying the children on their way to school?

“I tell the students to not even bring geometric equipment to school, because the soldiers don’t allow them through the checkpoint, and if they have them in their bags, it’ll cause big problems. These are important equipment for students and their learning, but they are unable to have them.

“Another issue is that the students who are tall for their age are often asked to show their ID, even though they are only 13 or 14 years old and don’t yet have IDs (IDs are given to every Palestinian at 16 years old). This causes problems when these students try to get to school and border police don’t believe they are younger than 16.

“When school finishes each day we divide students into three groups and escort them in the direction of their homes. We do this to make sure they get home safely, past the checkpoints, settlers, and border police.

“We really care about the safety of our students, but we face many obstacles and difficulties.

“The parents of the children are too afraid to come to the school. They are too afraid to visit and see the children in their educational environment because of the checkpoints, the Israeli border police, and the settlers. Last Monday, the Israeli border police claimed that some of my students threw stones at Qitoun checkpoint. I told them you can search the school and you will not find one stone. The border police did not find any stones, only a pile of left over rubble from workmen drilling. The border police threatened and said they will come into the school and arrest any child who throws a stone.

“This is my fourth year as the principal at this school. My students don’t throw stones.”

Every time you go through a door or cross the street, wait for a minute to try to better understand what it is like to not have the freedom of movement like many Palestinians. If walking with someone, share the ‘why’ behind your waiting: checkpoints prevent many Palestinians from freely moving around. Write about the importance of freedom of movement on social media alongside a picture of one of the military checkpoints. Include a link to this page of the Kumi Now website along with the hashtags #HumanRights, #KumiNow, and #Kumi9.

Literature: From A Land Without Borders: My Journey around East Jerusalem and the West Bank by Nir Baram

Evening is considered the time of day when traffic through Kalandia is at its lightest; the big rush is in the morning, when Palestinian laborers who work in Jerusalem have to get through. We crowd in under a shelter alongside dozens of men and women. It’s quiet and tense, and almost no one talks. The cab driver who brought us here, an Israeli resident with a blue ID card, told us he spent his whole life in West Jerusalem, but now he has no transit permit and he hasn’t seen the city in four years. “At the checkpoint, you’re always focused on one thing,” he says, “Will they let you through or will there be trouble? It’s the humiliation, the uncertainty you have no control over your day-to-day.”

We stand in line to get to an iron turnstile. Every so often we hear a loud beep and three people walk through the turnstile, which immediately locks behind them. The three who get through stand in a sort of holding area, and one by one they go up to a window and present their ID cards. If their papers are in order, they must take off their coats, belts, and sometimes shoes, and put them through a scanner along with their bags. If another beep sounds and a red light goes on, they also remove their shirts and put them in the machine. It takes a few minutes for three people to get through, but if the soldiers find a problem with the papers, the process can drag on for fifteen minutes. It’s been almost an hour and we’re close to the gate now, with a line of about eighty people stretching behind us. In the morning, that number can reach up to a thousand.

From A Land Without Borders: My Journey around East Jerusalem and the West Bank, by Nir Baram, an Israeli journalist, editor, and author. Translated by Jessica Cohen.