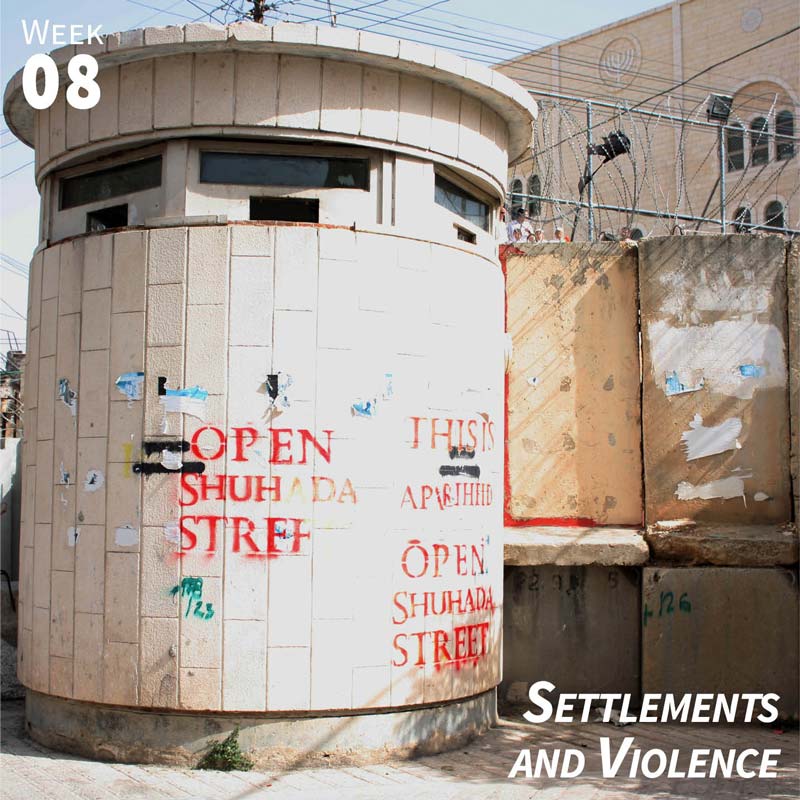 This week, as Palestinians mark the date of the Ibrahimi Mosque massacre on February 25, the Kumi Now community is focusing on Israeli settlements. Palestinians in the occupied territory face loss of lands and resources, violence, discrimination, and other injustices due to the encroachment of these settlements that are illegal under international law. Here’s what you need to know and what you can do so that together we can rise up.

The first settlements started soon after the Six-Day War in 1967. The basis of most settlement activity has been the Allon Plan, an ambitious plan to annex large portions of the West Bank into Israel. B’Tselem reports that “From 1967 to the end of 2017, more than 200 Israeli settlements were established in the West Bank. They include:

Beyond the losses of lands and resources, and the hardships brought by the roadways and added checkpoints, there is the issue of settler violence. Settlers routinely harass Palestinians, destroy their olive trees (see Week 11), and commit more serious acts of assault and murder. They do so in attempts to steal Palestinian land and resource and scare them away so that settlement activity can continue. It’s a working strategy and safe as settler violence is rarely prosecuted. A ten-year review by Yesh Din found “a police complaint filed by a Palestinian in the West Bank has a mere 1.9 percent chance of being effectively investigated, and a suspect identified, prosecuted and convicted” and that “93.4% of investigations regarding damage to olive trees were closed due to police investigation failures.”

Saree Makdisi succinctly sums up the inherently unequal treatment of Israeli settlers and Palestinian citizens of the West Bank in his book Palestine Inside Out: An Everyday Occupation:

“Various military regulations specifically enable rights for foreign, non-Israeli Jews … that are denied to native Palestinians.… And the ability of foreign-born Jews to move into homes in the West Bank and East Jerusalem—as almost half a million settlers have done—is greatly encouraged by Israel, while the right of Palestinians like Sam Bahour to return to their family land in the occupied territories is severely limited, and refused altogether in the case of Palestinian land and homes inside Israel itself. Israeli government policies directly facilitate—and are directed by—the view that Jews have an exclusive entitlement to all the “Land of Israel.” Palestinians are routinely denied building permits, and their homes are frequently demolished—but there are government incentives making it easier for Jewish individuals and families to buy or rent space in the settlements built in the occupied territories. Palestinian schools are underfunded, frequently closed, students and teachers alike having to run a gauntlet of curfews and checkpoints just to get to class—but there are generous government subsidies for schools in the Jewish settlements. Israel has illegally withheld hundreds of millions of dollars of tax receipts that it collects on behalf of the Palestinian Authority—but there are huge tax breaks for Jews who elect to settle in the occupied territories. When they are open at all, Palestinian roads are constantly blockaded and interrupted, undermined and washed away—but there are special roads reserved for the exclusive use of Jewish settlers, making their commute to jobs in Israel much easier. There is a formidable Israeli military presence restricting life for the Palestinians precisely in order to guarantee the safety of Jewish settlers. There is one legal and administrative system applied to the Jewish population of the occupied territories—Israeli civil law—and another—military law—applied to the Palestinian population.”

The building of settlements continues unabated. The European Union reported that, “In the second half of 2018 advancement of housing units continued at an unprecedented high level. More than 7,000 housing units in the occupied West Bank (4,350) including East Jerusalem (2,900) were advanced in different stages of the planning and implementation process (tenders and plans).”

The United Nations, in a 2016 report, succinctly stated the legal basis of the settlements:

In its resolution 70/89, the General Assembly reaffirmed the illegality of the Israeli settlements in the Occupied Palestinian Territory, including East Jerusalem, and in the occupied Syrian Golan, as ruled by the International Court of Justice, and reiterated by the Security Council and the High Commissioner for Human Rights. These settlements amount to the transfer of a State’s population to the territory it occupies, which is prohibited by international humanitarian law. To meet its international legal obligations, Israel must stop building settlements, reverse any settlement development activity and make full reparations, which include the obligation to re-establish the situation affected by the violation. The transfer of the occupying Power’s population to the territory it occupies amounts to a war crime that may lead to the individual criminal responsibility of the officials involved.

The settlements then are one of the most egregious aspects of the occupation, as their very existence is clearly illegal under international law. This illegality is then combined with regular violence towards Palestinians and their property, the theft of water and other resources, and the hardships brought by an ever-extending network of settler roads and checkpoints.

Several Israeli and Palestinian organizations, along with the U.N. and EU and others, regularly monitor settler activity. Through the week, Kumi Now will publish essays and stories from these organizations further exploring this topic and highlighting what they are doing to document settler violence.

“My family owns 224 dunums of land close to the settlement, which we can only access during the olive harvest for one or two days a year. We cannot plow the land or pick the olives properly. The few days we’re allowed are also nerve-racking because of army and settler presence. Sometimes, they [the settlers] pick the good olives before we are allowed to reach our land … One of the settlers set up a sheep farm on part of my land and fenced it around. To get to it I need his permission and need him to open the gate. He controls the land, which he ruined with his sheep.

“I’m not the only one who suffers. About 8,000 dunums that belong to Deir al Hatab are inaccessible to their owners because of the settlement, the close military zone, the bypass road, etc. I was born in this land and spent my childhood on it. The land is our life and we’ve been deprived of it.”

Published by U.N. Office for Coordination of Humanitarian Affairs (OCHA) in “The Humanitarian Impact of De Facto Settlement Expansion: The Case of Elon Moreh”.

This week you get a choice of actions:

Share photos of your action on social media and include a link to this page of the Kumi Now website along with the hashtags #OpenShuhada, #KumiNow, and #Kumi8.

Literature: From Letters to My Palestinian Neighbor and Palestine Inside Out

“Ironically, it was in Hebron that my romance with the settlement movement ended. On an autumn night in 1984 … It was the night after Simchat Torah … Some Jews prolong the dancing for one more night … It is a beautiful custom, merging reverence with joy. But it was not beautiful that night in Hebron. To accommodate the celebration, the army had shut the streets and placed Palestinian residents under curfew. I saw Jews raising Torah scrolls, which contain the injunction to remember that we were strangers in Egypt and so we must treat the stranger fairly, dancing in the streets emptied of their Palestinian neighbors. The insistence on empathy with the stranger appears with greater frequency in the Torah than any other verse—including commandments to observe the Sabbath and keep kosher.

That curfew became for me a metaphor for the fatal flaw of the settlement movement: the sin of not seeing, of becoming so enraptured with one’s own story, the justice and poetry of one’s national epic, that you can’t acknowledge the consequences to another people of fulfilling the whole of your own people’s dreams.”

From Letters to My Palestinian Neighbor by Yossi Klein Halevi.

“At heart, the conflict between Israel and the Palestinians is actually very simple. It is not about religion. It is not about security. It is not about terrorism. It is about land … The problem for Zionists is—and has always been—that the land that they want comes with non-Jews already on it … Acting on the desire for land occupied by others is a necessarily violent activity, and it has always been. No people in the history of the world has ever gone away just because another people wanted them to.”

From Palestine Inside Out: An Everyday Occupation by Saree Makdisi.