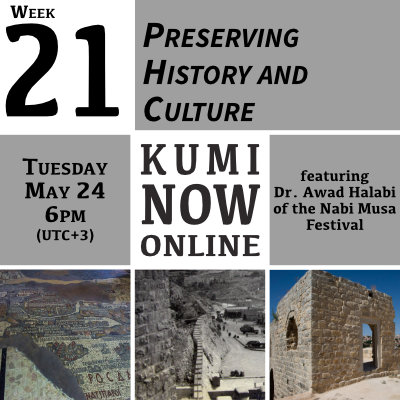 You can find the 2021 gathering here.

On May 24 we learned about Israel’s erasure of Palestinian history and culture and attempts to preserve them. We were joined by Dr. Awad Halabi, who has researched and worked with the Nabi Musa Festival.

Awad Halabi is an Associate Professor in the departments of History and Religion at Wright State University in Dayton, OH, teaching classes on Middle Eastern history and Islam. He is the coordinator of the minor in Middle Eastern and Islamic Studies. He has published articles in edited books and the Jerusalem Quarterly and the Journal of Palestine Studies. He conducted his doctoral work at the University of Toronto. His book Palestinian Rituals of Identity: The Prophet Moses Festival in Jerusalem, 1850-1948 (University of Texas Press) will be out in late 2022. He is also aboard member of the Palestinian Christian Alliance for Peace in the US.

This talk discussed the Prophet Moses festival (mawsim al-Nabi Musa), an Islamic celebration honoring the 13th century shrine of the Prophet Moses (maqam al-Nabi Musa) located south of Jericho, the site of Moses’s reputed tomb. In the mid-19th century, festival organizers in Jerusalem organized the Prophet Moses festival in Jerusalem, inviting pilgrims to attend from throughout Palestine. They transformed the festival into a large, public, civic ceremony centered in Jerusalem. The talk will discuss how each social group involved in the ceremonies from 1850-1948 (Ottoman officials, British colonial officials, urban notables, religious officials, Palestinian nationalist leaders, Arab nationalist youth, villagers, women, Sufis, and anti-Zionist communist Jews) each attempted to control and order the festival to promote a range of social and political messages, such as on politics, colonialism, modernity, identity, Islam, and gender in Palestine from 1850 to 1948.

One of the videos he showed: https://www.iwm.org.uk/collections/item/object/