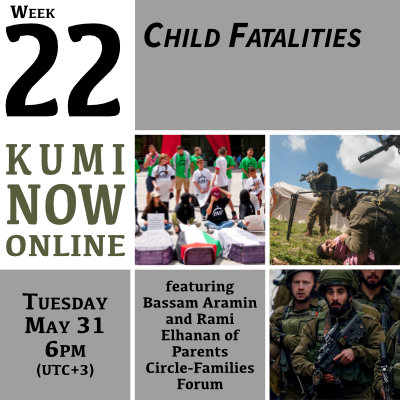 A video replay will be posted here and on YouTube a day after the gathering.

You can find the 2021 gathering here.

Join us on Tuesday, May 31, as we learn about the ongoing Nakba. We will be joined by Bassam Aramin and Rami Elhanan, founders and members of Parents Circle-Families Forum and Combatants for Peace.

Zoom Meeting: https://zoom.us/j/94679502800 (You might need to do a quick registration. This link is the same, either way.) Remember, if you’d like to receive a reminder about the gathering an hour before it begins, please use the registration form at the bottom of the page.

Rami Elhanan was born in Jerusalem and described himself as being a “sixth-generation Jerusalemite.” He served in the Israeli Defence Forces during the Yom Kippur War in 1973. His daughter, Smadar, was killed in a suicide bombing in Jerusalem in September 1997. He then met Yitzchak Frankenthal, the founder of Parents’ Circle-Families Forum, and became  an active member of the organization.

Bassam grew up in Hebron, and at age 17 he was caught attempting  an attack on Israeli troops and given a seven-year sentence. While in prison he began a long-term conversation with a guard, that, over the course of months, changed his life and made him realize that change could happen through dialogue and without force. In 2005, Bassam co-founded Combatants for Peace, an organisation of former Israeli and Palestinian combatants leading a non-violent struggle against the occupation. Since then, he has remained a peace activist – even when, two years later, his ten-year-old daughter Abir was killed by an Israeli soldier.

You can read more of Bassam’s story at https://www.theforgivenessproject.com/stories-library/bassam-aramin/

Through their shared experiences of both empathy and tragedy Bassam and Rami became friends and have worked together through Parents’ Circle-Families Forum and Combatants for Peace.

You can watch the documentary about Bassam and Rami, titled Within the Eye of the Storm, at https://www.youtube.com/watch?v=PkqRibYJCHI

The novel Apeirogon by Colum McCann is based on the lives and friendship of Rami and Bassam: https://www.goodreads.com/book/show/50732671-apeirogon.