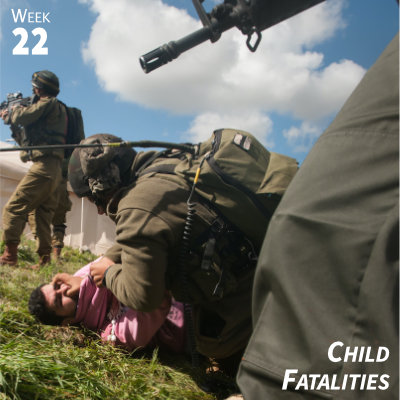 The United Nations observes June 1 as the Global Day of Parents, acknowledging the critical role that parents have in the lives of their children. But it is common for Palestinian parents to spend time worrying about their children and the reality that, in the end, the Occupation has more control over their children than they do as parents. And many Palestinian parents spend this day thinking about, or trying to visit, their children held in Israel’s military court systems. Worst of all are the parents who have seen the lives of their children taken from them by the weapons of Israeli occupation forces. With these parents and lost lives in mind, the Kumi Now community this week looks at the all-too-real child fatalities of the Occupation and what you can do so that together we can rise up.

Between January 2013 and December 2018, Israeli forces or settlers killed at least 690 Palestinian children living in the Occupied Palestinian Territory (oPt), according to documentation by Defense for Children International Palestine (DCIP). While the majority of these deaths (556) occurred during the summer 2014 Israeli military offensive on Gaza, dubbed Operation Protective Edge, at least 132 Palestinian children were killed outside of this military assault across the oPt with live ammunition or crowd-control weapons, based on DCIP data.

Israeli armed forces have been regularly implicated in widespread and systematic human rights violations against Palestinian children living under occupation. Although children affected by armed conflict are entitled to special respect and protections under international law, Israeli armed forces have consistently violated these protections through indiscriminate and disproportionate attacks that result in the unlawful killing and maiming of children.

Israeli forces are rarely held accountable for these killings. While Israeli authorities have selectively opened their own investigations into several incidents over the past few years, systemic impunity is the norm. Past experience establishes that Israeli authorities persistently fail to investigate alleged violations of its armed forces in accordance with international standards. For example, in October 2019 an Israeli soldier was sentenced to one month of community service for shooting and killing unarmed 14-year-old Othman Hilles during a Great March of Return protest. Despite more than 7,000 Palestinians being shot with live ammunition in the first 18 months of the protest, this was the first conviction during that time period. Nor was the soldier found guilty of manslaughter, but only of “disobeying an order” for firing without first getting permission from a commander.

In 2018, Israeli forces killed Palestinian children at a pace exceeding one child per week. That year, DCIP and the United Nations documented 57 children who died as a result of actions by Israeli forces and settlers, while 2,756 were injured. Of those killed, eight were from the West Bank, including one child from East Jerusalem, and 49 were from the Gaza Strip. The majority of the children (36) were over the age of 14.  Five children were below the age 12, including 22-month-old Bayan Abu Khammash who was killed by an Israeli air strike on August 9, 2018.

Most of those children, 74 percent, died after being shot with live ammunition. An additional four children were killed by tear gas canisters and rubber-coated metal bullets. Eight were killed by drone-fired missiles and airstrikes—including a child who succumbed to injuries sustained during an Israeli 2014 drone strike—and 3 were killed by tank-fired shelling.

The majority of these killings took place near the perimeter fence in the context of the Great March of Return, which began on March 30, 2018. The demonstrations were in protest of Palestinian refugees’ inability to go home to and reclaim ownership of properties lost during the establishment of the state of Israel and to demand an end to Israel’s 11-year near total closure of Gaza. According to UNRWA, approximately 70 percent of the Gaza Strip’s total population are registered refugees.

Since 2007, Israel has imposed an air, sea, and land blockade of the Gaza Strip. The blockade denies freedom of movement to the Gaza Strip’s estimated 2 million residents and prevents or limits a wide range of goods and services from reaching the Gaza Strip.

The blockade, in combination with multiple Israeli assaults, are the primary cause of the current humanitarian crisis. The unemployment rate is close to 50 percent, and more than half of the population are living below the poverty line, according to a 2018 report by the Office for the Coordination of Humanitarian Affairs (OCHA). This is true despite the fact, also reported by OCHA, that more than 80 percent of the population receives humanitarian assistance. The United Nations Conference on Trade and Development has warned that if current trends are not reversed, the Gaza Strip could become uninhabitable by 2020.

Under these conditions, and with no resolution to the current crisis in sight, Palestinians across the Gaza Strip began protesting en masse. These mass civilian protests took place weekly throughout 2018 and have drawn large crowds of demonstrators, including women, children, and elderly people.

Protesters’ activities largely and consistently involved erecting supporter tent encampments, peaceful gatherings, including music and dancing and marches to the perimeter fence surrounding Gaza, displaying signs or Palestinian flags. Some protesters have resorted to throwing stones, and a limited number of individuals have tried to pass the perimeter fence, and thrown Molotov cocktails or firebombs towards the fence and Israeli forces’ positions that are often hundreds of meters away.

Under international human rights law, states have a duty to protect human rights in the context of peaceful protest which is recognized as a realization of the freedom on opinion, expression, peaceful assembly and association. Further, states have particular obligations in relation to children and must take all appropriate measures for the safety and protection of children, including in the context of peaceful protests.

On the first day of the demonstrations, Israeli forces fatally shot two children, including 17-year-old Ahmad al-Aydi. A friend and witness told DCIP that around 1 p.m. on March 30, Ahmad was 300 meters (984 feet) from the perimeter fence when the two decided to walk to the tent camps, located some 700 meters (2297 feet) from the perimeter fence, to perform their Friday prayers. Partway there, Ahmad was struck in the head with a bullet, collapsing. Ahmad was treated in Gaza Strip and West Bank hospitals, succumbing to his wounds on August 5, 2018.

The international legal standard for use of intentional lethal force is not whether an individual is engaged in conduct deemed to be violent, but whether the person presented a mortal threat to Israeli forces at the time they were targeted with intentional lethal force. Documentation collected by DCIP and other Israeli, Palestinian, and international human rights overwhelmingly establishes that Israeli forces shot and killed unarmed protesters, like Ahmad al-Aydi, who did not pose any threat.

Israel’s disproportionate and brutal response to protests drew condemnation and concern from world leaders. United Nations Secretary General António Guterres on March 30, 2018 called for an “independent and transparent investigation” into the clashes which had resulted in “at least 15 deaths and a large number of injured.” In the same statement, Guterres also appealed to parties involved to refrain from acting in a way that could lead to further casualties, particularly for civilians.

Despite calls for restraint, Israeli forces continued to respond to the protests with excessive force. On May 18 2018, the U.N. Human Rights Council convened a special session in Geneva due to the deteriorating conditions in the occupied Palestinian territory. It adopted Resolution S-28/1, calling for the establishment of an independent, international commission of inquiry to investigate all alleged violations and abuses of international humanitarian law and international human rights law in the occupied Palestinian territory, in the context of mass protests that began on March 30.

In December 2018, DCIP along with the City University of New York (CUNY) Law School Human Rights and Gender Justice Clinic submitted a report to the United Nations Commission of Inquiry in hopes of helping to hold to account those responsible for the killings and other human rights violations taking place. In the overwhelming majority of cases, DCIP was able to confirm children did not present any imminent, mortal threat or threat of serious injury when killed by Israeli forces.

The report concludes that Israeli forces and officials are responsible for war crimes, crimes against humanity, and other serious violations of international law for the killing of Palestinian child protesters in Gaza. In order to challenge systemic and seemingly perpetual impunity and increase protections for children, the report strongly urged the Commission of Inquiry to analyze alleged war crimes and crimes against humanity, name specific perpetrators, and assign criminal responsibility to higher-ranking Israeli armed forces’ members or other officials, where applicable.

In addition to the work being done by DCIP to document and protest this violence towards children, other organizations are also doing their part, on shoestring budgets, to help the young victims of the occupation. Through the week, Kumi Now will publish essays and stories from these organizations, further exploring this topic and highlighting what they are doing to address child fatalities in the Gaza Strip and across Palestine.

Ahmad, a 14-year-old Palestinian, was hit by live ammunition at Israel’s perimeter fence surrounding Gaza during one of the Great March of Return demonstrations in June 2018. He was injured in his right leg, close to the knee, and as a result he experienced difficulties in performing daily tasks, including walking and dressing by himself, and suffered depression. “I cried during the nights, because I wasn’t able to play with my friends,” he recalls …

In August 2018, Humanity & Inclusion (HI) reached Ahmad, through the Baitona Association for Community Development. Based on a comprehensive assessment and consultations with his family, an individual rehabilitation plan was prepared for him, including weekly visits, physiotherapy, occupational therapy and psychological support. Through these interventions, Ahmad regained his ability to perform basic tasks and learned how to use crutches to move around more freely. The interventions also prepared him physically and mentally to go back to school.

“I went through dark moments and I lost faith that I would regain my normal life,” he told HI’s team. “Now I can dress by myself, especially the shoes.” His mother reports proudly that even though he suffered concentration difficulties following his injury, he got high marks in his first semester at school. “I am lucky that I can walk again, when I felt I wouldn’t,” Ahmad concluded.

From “Supporting the rehabilitation of Palestinians injured at Gaza border demonstrations,” published by the United Nations Office for the Coordination of Humanitarian Affairs (OCHA).

Defense for Children International Palestine keeps track of the violence done towards children, so that their lives are not forgotten. While being respectful of the dead and their families, it is also important to put a human face on the suffering in Gaza and Palestine. As such, we urge you to find respectful ways to share these images and stories in your Kumi Community: https://www.dci-palestine.org/tags/fatalities_and_injuries

Think carefully about what and how to share to social media. If you do so, include the hashtags #nowaytotreatachild, #KumiNow, and #Kumi22.

Today the headlines clot in my blood.
A little Palestinian dangles a truck on the front page.
Homeless fig, this tragedy with a terrible root
is too big for us. What flag can we wave?
I wave the flag of stone and seed,
table mat stitched in blue.

I call my father. We talk around the news.
It is too much for him,
neither of his two languages can reach it.
I drive into the country to find sheep, cows,
to plead with the air:
Who calls anyone civilized?
Where can the crying heart graze?
What does a true Arab do now?

By Naomi Shihab Nye, a poet, songwriter, and novelist born to a Palestinian father and American mother. As published in the Anthology of Modern Palestinian Literature, edited by Salma Khadra Jayyusi.

“No Way to Treat a Child: Palestinian Children in the Israeli Military Detention System” (2016):

Additional reports from DCIP can be found at http://www.dci-palestine.org/publications

Reports from other organizations:

We have a YouTube playlist with videos about child fatalities

And our previous entry with the DCIP addresses Palestinian Youth Detention: