Just the Facts: Women in Conflict 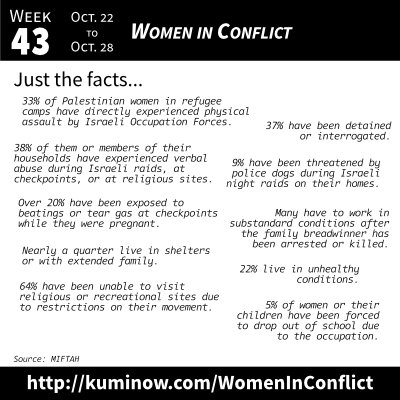 These facts are taken from the MIFTAH data in “Palestinian Women: The Disproportionate Impact of Israeli Occupation” from MIFTAH, PWWSD, WCLAC, TAM, and Karama.

We suggest you also read the following reports:

To go deeper, we will be developing an extensive list of Additional Resources at the bottom of this week’s entry as well as a YouTube playlist on the subject.  Once you understand the situation you’ll want to get involved. Here’s the Kumi Action for this week: