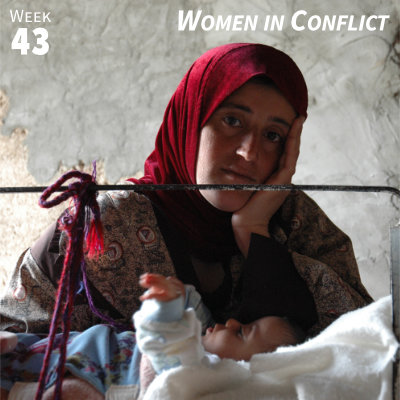 There is a twisted irony at the intersection of war and gender: war is almost always declared and fought by men. But it is women and children that suffer much of the violence. The end of war is no different: men negotiate treaties, while the voices, needs, and expertise of women are ignored. In reality, however, women, and by extension children, bear unbelievable levels of violence and harm, especially in refugee camps, military occupations, and the ongoing crisis in Gaza. The United Nations acknowledged as much with its landmark resolution on women, peace, and security, Resolution 1325, on October 31, 2000. Kumi Now organizations and networks such as the Coalition of Women for Peace, MIFTAH, and Women in Black are Kumi Organizations working to protect women and make them part of the solution to the Israeli-Palestinian conflict. Here’s what you need to know about violence against women in war and what you can do so that together we can rise up.

While the Israeli occupation has inflicted suffering on all Palestinians, “Palestinian women in particular have been forced to endure both direct and indirect gendered violence emanating from the occupation, which has affected women in distinct and specific ways.” That’s the conclusion of a joint 2018 report. This gendered violence is also hardly unique to Palestine. The U.N. Office of the High Commissioner for Human Rights (OHCHR) outlines how military conflicts exacerbate violence towards women and how it continues long after the armed conflicts are over.

These acts of violence, direct and indirect, are carried out by Israeli forces or by settlers, with Israeli forces often standing by and failing to intervene. Furthermore, conflict makes gender-based violence more acceptable. Palestinian women, denied freedom of movement, particularly in refugee camps, are subject to domestic violence they cannot escape.

And what, exactly, are these acts of violence? They include:  destruction of their families due to imprisonment, denial of permits, night raids, residency revocations, home demolitions, violence at the hands of settlers and soldiers (particularly at checkpoints), psychological torture and lack of sanitation in prisons, increased domestic violence, and denial of health care (particularly in Gaza).

The report also outlines the psychological trauma caused by the occupation. Meanwhile, research by MIFTAH in 2014 found even more rampant violence towards women: “63.3% of Jerusalemite women reported having been victims of violence by the Israeli army at checkpoints between Jerusalem and the West Bank. 83.3% were hit at the checkpoints, while 90.4% were cursed at or had to face other degrading treatment. 65.7% of women living near the Annexation Wall endured aggression from the occupation army around the wall. Most released female prisoners reported being beaten upon arrest by occupation soldiers, and 96.7% reported being denied access to medication or doctor visits, including pregnant women left without healthcare while under detention.”

And as with all forms of violence against women, much of it goes unreported. Women in Black reminds us in their entry, “Palestinian women often do not report the violence they experience from soldiers and settlers because they fear the repercussions and do not believe the legal system can protect them. According to WCLAC only 105 out of the 1805 filed cases (6%) resulted in indictments between 2000–2009.”

Israel is bound to international humanitarian law through a variety of treaties. In particular, the Fourth Geneva Convention prohibits collective punishment and population transfers, and obliges Israel “to preserve the family, cultural, and religious lives” of Palestinians. Furthermore, the Committee on the Elimination of Discrimination Against Women has confirmed that states are responsible for the human rights of individuals “within their territory or effective control, even if not situated within their territory.” Thus, arguments from Israel and its supporters that such laws do not apply to Palestinian territory since it is not part of Israel do not hold up, given Israel’s control over such areas. And U.N. Security Council Resolution 1325 calls for the protection of women and girls during war, equal participation of women in decision-making, and the prosecution of those responsible for crimes.

Israel, as such, needs to make clear efforts to protect Palestinian women, including, but not limited to: allowing freedom of movement, providing psycho-social support to victims, allowing and supporting women’s and human rights organizations, granting family reunification requests, ceasing residency revocations, prosecuting and punishing soldiers and settlers who commit acts of violence, investigating all accusations of gender-based violence, granting basic prisoner rights, and pro-actively addressing gender-based violence so as to prevent it occurring in the first place, and to encourage the reporting and prosecution of the incidents that now go unreported.

Failing a sudden reversal by the government of Israel, what can be done? The suffering of women in conflict and post-conflict societies is also an opportunity to include them in the process of rebuilding, utilizing all of their experiences as victims, combatants, members of resistance movements, and as agents in peace processes.

For example, MIFTAH is working for the implementation of Resolution 1325, pushing for reporting of violations of women’s and girls’ rights under the resolution and encouraging local women’s organizations around the world to advocate for and work with Palestinian women. Women in Black recognizes the interrelatedness of war and domestic violence and how violence is used to control women. They use non-violent and non-aggressive forms of action, such as holding vigils, sitting down to block a road, entering military bases and other forbidden zones, refusing to comply with orders, and “bearing witness.” And the Coalition of Women for Peace is protecting the rights of women to resist the occupation, and focusing on the rights of women in Gaza.

Through the week, Kumi Now will publish essays and stories from these and other organizations further exploring this topic and highlighting what they are doing to help Palestinian women.

Many Palestinian women have given testimonies on the effect of the violence of the Israeli military occupation on their lives.  A young woman from Burin recounted the effect Israeli settler violence has had on her life: “I do not have control over my life; I cannot leave my house or my village because of the problems caused by the settlers. Whenever I go anywhere, I stay on the phone with my mom to make sure that everyone is safe, and to know if there are settlers nearby. I really wanted to go to university, but that’s impossible under these conditions. I feel like I have lost my childhood because of what they do to us. They killed our animals, destroyed the crops and trees we planted, and burnt our house down. I feel like I am 100 years old. Instead of looking to the future, I find myself always thinking of the settlers and what they do to us. I don’t have any hope for the future.”

One Jerusalemite woman recounted how house demolitions and forced eviction affects her, and consequently her relationship with her family: “I never feel safe; I live with the constant feeling that I do not know what will happen to my home. I also feel insecurity in my relationship with my husband and my children. I try to make everything appear normal, but it’s very difficult. I feel stressed and nervous, and these feelings end up being projected onto my husband and children. When the kids are working on their homework and ask me for help, I get angry quickly and tell them to go away. The whole situation makes me feel and act this way. I cannot think about the future and do not allow myself to think of it because it would be too disturbing. My health is affected by this.” From MIFTAH

Take action and start a vigil on October 31! Follow this link to learn more about the general guidelines to start a Women in Black vigil. Coordinate with your local Kumi Community to publicize when and where your vigil will be. Take a picture of your vigil and share it on social media. Schedule your vigil so that you can stop and pray at 13:25 PM (1:25 PM) for one minute according to your timezone in honor of UNSC Resolution 1325.

If you are unable to join or host a vigil you can call a women’s organization in your area and tell them about the resolution and ask them to speak about Palestinian women this week in honor of UNSC Resolution 1325. If they ask for ideas or more information you can suggest that they publish the story from the Kumi action.

Post photos or videos from your vigil, or the messages you sent, on social media, tagging the women’s organizations you contacted. Include a link to this page of the Kumi Now website along with the hashtags #KumiNow and #Kumi43.

Literature:  From Occupied with Nonviolence by Jean Zaru

Most of the media images of Palestinians are of men and boys by the hundreds in the streets in Gaza, whether at demonstrations or funerals.… But when there is gunfire, when there are deaths, when there are funerals, women are involved. They do not leave the house and stream through the streets, but women are still holding up half the sky. Much of the work of women is invisible, especially in the eye of the media.

The women of Palestine are often referred to as the “glue of our society.” We are the ones who hold our families together, while our husbands, brothers, and sons are in prison, deported, wounded, or killed, or when they have migrated for economic or political reasons. Yet, as in all societies, we Palestinian women have been cast into roles that have kept us subservient and out of critical decision-making circles.…

So as a Palestinian woman, I find myself struggling on two fronts. Palestinian women must work for liberation on the national front while, at the same time, working for liberation as women on the societal level. We have to struggle to free ourselves from hierarchy and from the male-dominated structures of our society.

Jean Zaru, a Palestinian Christian woman, Quaker, and pacifist, paints a poignant picture of the many struggles women face under occupation