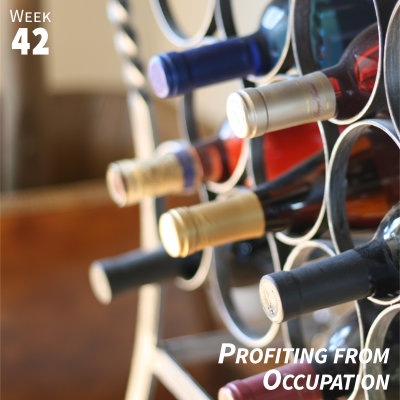 In November 2018 Human Rights Watch published “Bed and Breakfasts on Stolen Land,” detailing how travel companies such as Airbnb and Booking.com profited from the occupation. Despite years of reporting detailing how travel companies leech off of the occupation, this was finally enough to make Airbnb notice, and Airbnb announced it would stop listing properties in Israeli settlements in the occupied West Bank, as part of a new policy to bar listings that are “contributing to existing human suffering.”

It was an important step, but a small one, underlining the reality that hundreds of global corporations knowingly profit off of the occupation. The United Nations, well aware of the problem, in 2013 issued a report requiring the creation of a database of companies of businesses that have enabled or profited from settlements. In 2017 it got as far as sending letters to 150 companies. And in 2018 the U.N. said it had identified 206 companies with ties to Israeli settlements. The actual database, however, has faced fierce opposition, and has repeatedly been delayed year after year.

However, any database that is published may still be incomplete, for focusing on the settlements means that the many companies profiting off of tourism in the occupied territory (see Week 24), supporting the Israeli military (which has bases throughout the West Bank), exploiting natural resources (see Week 12), and in supplying other equipment used to enforce the occupation may not be included.

For example, the Israeli government makes use of equipment from Caterpillar (American), Volvo (Swedish), Hyundai (Korean), and JCB (English) to carry out home demolitions in the occupied Palestinian territory while a major supplier of tear gas, and possibly other equipment, used in the occupation is Combined Systems.

Another major profiter of the occupation of Palestinian land and the unjust system of discrimination inside the state of Israel is Hewlett-Packard. As Friends of Sabeel North America explain in their entry:

HP is directly involved in sustaining Israel’s occupation of Palestine. In 2015, Hewlett Packard Co. split into two corporations: HP Inc. (consumer goods) and Hewlett Packard Enterprise (corporate services). Both have contracts with the state of Israel and Israeli military, and both benefit from the HP brand name.

HP Inc. is the exclusive provider of computers to the Israeli military, which carries out the occupation of the West Bank, including East Jerusalem and the Gaza Strip, and in the last decade has carried out the brutal siege of Gaza.

HP Enterprise also profits off of oppression in Israel, providing servers and technology used in prisons. Israel’s prison system is used to suppress Palestinian political activity, and to stifle opposition to its policies. By helping Israel run its prisons, HP is at the heart of Israel’s use of mass incarceration to undermine Palestinian opposition to apartheid.

Throughout the week, Kumi Now will publish essays and stories from different organizations further exploring this topic and highlighting what they are doing to stop corporations from profiting off the occupation.

Our work on the HP-Free church campaign has sharpened our skills for action on all kinds of issues locally. Because we’re acting together for justice in Palestine and peace in the Holy Land, we’re learning how to act bravely for immigrants in our community. We’re learning how to act courageously for civil rights among transgender kids and gay couples. Because we took the step of becoming an HP-Free church and live with the criticism, we’re stepping out in faith and action all over our city and state. It’s unleashed a great spirit of care and determination in us. We can’t continue to preach solidarity and act as if it’s optional in the church. We can’t continue to denounce occupation and participate in it-with our investments and our choices and our spending habits. We are an HP-Free church because our Palestinian friends, beleaguered and organized, have asked us to act in faith. We are an HP-Free church because solidarity requires action.

Over the years, I’ve heard so many dear Palestinian leaders—young and old, Christian and Muslim—cry out for freedom and insist on action in the West. They’ve paid such an enormous price for their pain and courage. What am I to do? Nothing? If I do nothing, if the church does not act, we are complicit in injustice, in occupation, in human misery. Jesus urges us to stand on the other side of history. Moses doesn’t suggest that Pharaoh let the Hebrews go. He insists on it. Jesus doesn’t suggest that we free the imprisoned and liberate the oppressed. He insists on it.

I’ve been criticized mightily in our community. Some have even suggested that I’ve encouraged antisemitism through my support for the BDS movement. But I’m not buying it. I stand with a growing coalition of Israelis and Palestinians, a growing coalition of Jews and Christians and Muslims. We do this work together. We boycott HP as an act of moral courage and defiance: a protest against occupation, bigotry and destruction. It’s time for the church to act like the defiant, loving, creative church of Jesus Christ. It’s time for us to boycott companies profiting from human misery, and the occupation of the poor, and the destruction of native communities. For us, the HP-Free movement is a step in that direction.

HP means something different for Palestinians living under occupation. Use #HP and play with the letters ‘H’ and ‘P’ to send a creative message, illustrating one of HP’s many possible meanings. For example, #HP – How Pathetic, Help Palestine, Hear Please the cry of Palestinians, How have People wronged the Palestinians, or How is Peace possible with companies profiting from the occupation. Use one of these messages or get creative and make your own meaning for HP!

Include a link to this page of the Kumi Now website along with the hashtags #HPFree, #KumiNow and #Kumi43.

These are among the hardest words I have ever written. But they are vitally important. Not only is Israel harming Palestinians, but it is harming itself. The 1,200 rabbis may not like what I have to say, but it is long past time for them to remove the blinders from their eyes and grapple with the reality that Israel becoming an apartheid state or like South Africa in its denial of equal rights is not a future danger, as three former Israeli prime ministers—Ehud Barak, Ehud Olmert and David Ben Gurion—have warned, but a present-day reality. This harsh reality endured by millions of Palestinians requires people and organizations of conscience to divest from those companies-in this instance, from Caterpillar, Motorola Solutions and Hewlett Packard-profiting from the occupation and subjugation of Palestinians.

The Nobel Peace Prize recipient, the Most Reverend Desmond Tutu, is a South African Anglican cleric and theologian known for his work as an anti-apartheid and human rights activist. From “Justice requires action to stop subjugation of Palestinians,” published in the Tampa Bay Times.