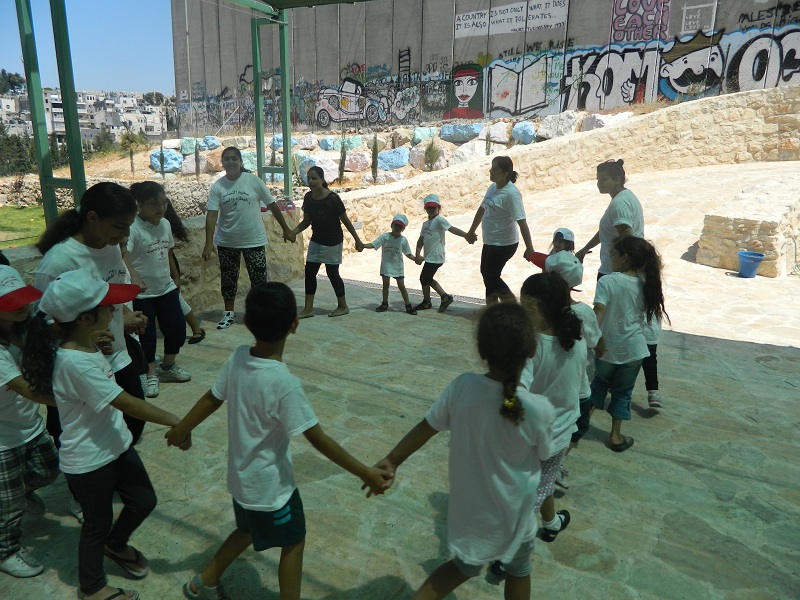 We often feel divided by our national and religious views and backgrounds. But when it comes to children we as humans are in agreement: children should not be the victims of the wars and conflicts of adults. But in the occupied Palestinian territory children bear the physical and mental scars of decades of occupation. Wi’am: The Palestinian Conflict Transformation Center is working to ensure that Palestinian children are allowed to be children. Here’s what you need to know and what you can do so that together we can rise up.

Wi’am: The Palestinian Conflict Transformation Center is a grassroots civil society organization based in Bethlehem. In Arabic,“wi’am” means “cordial relationships,” and developing relationships is the essence of our mission. Wi’am helps resolve disputes within the Palestinian community at the grassroots level by implementing the traditional Arab form of mediation, known as Sulha, along with Western models of conflict transformation. They have programs that empower children, youth, women and men, addressing the psychological and physiological consequences of long-term conflict.

Although Palestinian autonomy now extends into most major population centers in the West Bank, in reality 60% of the West Bank remains under Israeli military occupation. The Palestinian community has been severely weakened by a half-century of occupation, and the transition of power to the Palestinian National Authority is slow-moving. In addition to the newly established court system under the Palestinian National Authority, the traditional Sulha remains essential and legally binding. It is in this context that Wi’am continues its operations.

We at Wi’am believe that one of the most important things is for you to bring people, churches, and delegations to the “Holy land” to witness and meet the people of the land.  To come, learn, and listen, so that they may be empowered through knowledge and experience and return home to effectively advocate and share their witness. Such exposure visits help to deepen understandings, melt away misconceptions, and most importantly bridge the divide created between people that has been perpetuated by false narratives and reporting. Robert Frost explained the power in taking the less travelled road, and today and everyday we invite you to walk with us on this road. To see our pain and suffering, and then to return home hopeful.  No injustice can last forever! And with your help we may leave injustice and bask in the light of justice much sooner. We hope to see you soon.

Wi’am’s children’s program aims at affording children a normal childhood, allowing for them to develop as healthily as possible.  Our program aims at increasing hope and resilience among our children, all while equipping them with the necessary skills and knowledge to help them face any hardship and animosity which they may encounter, as a result of military occupation or domestic challenges and difficulties. Wi’am’s location, near Aida refugee camp, and besides the wall, has placed it in the center of tension within Bethlehem and in the heart of weekly violent clashes: The Hebron Jerusalem road near the wall and the Aida refugee camp have been deemed 2017’s most gassed area in the world by the Human Rights Watch and UC Berkeley School of Law study “No Safe Space”. In fact, the study’s results

“reveal a pattern and a level of distress consistent with high levels of anxiety and depression including: sleep disruption, acute stress responses, and chronic post-traumatic stress disorder. A consistent pattern of responses across all groups—men, women, and children of all ages—suggest that the residents of Dheisheh and Aida Refugee camps are exposed to very high levels of psychological distress on a regular basis.”

This is not just a result of the tear gas. Consider too:

Violence: The United Nations Office for the Coordination of Humanitarian Affairs (OCHA) reported that at least 961 children were injured at the hands of Israeli forces in 2017. Defense for Children International – Palestine argues, in “Year-In-Review: Worst Abuses Against Palestinian Children in 2017”, that, “Israeli forces routinely employ the use of excessive force and intentional lethal force in situations not justified by international norms, which in some incidents may amount to extrajudicial or wilful killings.”

Military detention: And in “No Way to Treat a Child” DCIP writes, “Israel has the dubious distinction of being the only country in the world that systematically prosecutes between 500 and 700 children in military courts each year. Since 2012, Israel has held an average of 204 Palestinian children in custody each month, according to data provided by the Israel Prison Service…From the widespread ill-treatment and torture of Palestinian children to the systematic denial of their due process rights emerges a system of control that masquerades as justice.”

Education: In its report “Palestinian Youth: With a Special Focus on Jerusalem. PASSIA reports that “The school dropout rate amongst Palestinians from East Jerusalem is very high: an estimated 36% fail to complete high school. Some 13% of Palestinian students in Jerusalem schools drop out of their classes each year, compared to only 1% of students in Israeli schools in West Jerusalem (and 6.4% in Arab schools in Israel proper). The Jerusalem Municipality does little to deter this trend from growing, as 30% of East Jerusalem schools lack any sort of dropout prevention program whatsoever and another 40% have only minimal service.”

Employment:  When it comes to employment, PASSIA reports that unemployment is incredibly high among Palestinian youth, especially among 20-24 year olds, with a 41% unemployment rate. PASSIA attributes this high unemployment rate to movement and employment restrictions, political hostilities, language difficulties, and other factors. Of great concern is the despair that the job market produces, with 86% of Palestinian youth feeling there are insufficient opportunities for growth.

Cultural identity: Finally, PASSIA argues that “Since 1967, Israel has employed a network of oppressive measures to undermine, if not eliminate, the (collective) identity of Palestinians, particularly in Jerusalem, with the ultimate goal of compelling them to leave (the city) in search for better living conditions elsewhere and, thus, minimizing their presence in general and in Jerusalem in particular.”

All these factors and more (settler violence, checkpoints, online harassment, Israeli control of curriculum, etc.) have created a multitude of Palestinians from each generation that suffer PTSD, including children. Or, in this context, what is more accurately referred to as CTSD: Continuous Traumatic Stress Disorder. Because of this, many children suffer trauma-related side-effects including bed-wetting, anxiety, lack of focus, irritability, disconnectedness, and a sense of hopelessness.  These side-effects permeate all aspects of their lives and often times strongly affect their schooling and development.

I have two brothers in Israeli jails and I, myself was placed in administrative detention when I was 12 years old.  I was kidnapped from my home in the middle of the night and taken for 3 weeks, during which I was interrogated and often times beaten.  When I was released I was very scared, I thought the soldiers would come for me again, so I stayed home. Finally after a few weeks, I began leaving the house, but most of my friends would no longer talk to me, out of fear that they would later be interrogated and kidnapped as well.

I started going back to Wi’am, where I was able to tell people, especially Americans, about my experience, and I was able to begin having friends again.  They taught me that what happened to me was not right, and that even as a Palestinian child I have rights and a voice. But, most importantly, is that they taught me that I was important and that I had the right and could be heard, that I could have friends, and that regardless of what happened and might happen, I will always have my friends and the people at Wi’am who will welcome me and help me.  Now, I want to work hard so that I can become an Arabic teacher so that I can write children’s stories that make them feel good and so that I can teach them love for our language and culture. I will also write about Palestine and our struggle.

Translated from Arabic by Wi’am

Israel ratified the UN’s Convention on the Rights of the Child in 1992. But the Israeli government has had difficulties identifying just what a ‘child’ is, as it argues that the Convention does not apply to the West Bank. Furthermore, while non-Palestinian children in Israel and around the world don’t become adults until they are 18, it treats Palestinians as adults at 16.   We need to help Israeli politicians learn what a child is. Share a photo of yourself as a child, along with messages such as:

Feel free to look at the Convention on the Rights of the Child treaty and remind Israel which parts of the treaty they are breaking:

A powerful way to share these photos and messages would be for your class or club or church group to post the childhood photos in a hallway, inviting others to identify who is in each photo. Or, simply share them on social media. Include a link to this page of the Kumi Now website along with the hashtags #KumiNow and #Kumi5.

“Returning to Haifa” by Ghassan Kanafani

“Returning to Haifa” tells the story of Said and Safiyya, a Palestinian couple who lose their infant son when they are forced to flee Haifa during the invasion. They return 20 years later and find their lost son. In the passage, Said realizes that his son has been the ultimate victim of the war, having lost his identity as a Palestinian:

“Man, in the final analysis, is a cause. That’s what you said. And it’s true. But what cause? That’s the question! Think carefully. Khalid is so a cause, not because he’s my son. In fact… but put the details, in any case, aside. When we talk about man, it has nothing to do with flesh and blood and identity cards and passports. Can you understand that? Good. Let’s imagine that you received us—as we’ve dreamed for twenty years—with embraces and kisses and tears. Would that have changed anything? Even if you had accepted us, would we accept you? Let your name be Khaldun or Dov or Ishmael or anything else…what changes? In spite of it all, I don’t feel any scorn towards you. The guilt isn’t yours alone. Maybe the guilt will become your fate from this moment on. But beyond that, what? Isn’t a human being made up of what’s injected into him hour after hour, day after day, year after year? If I regret anything, it’s that I believed the opposite for twenty years!”