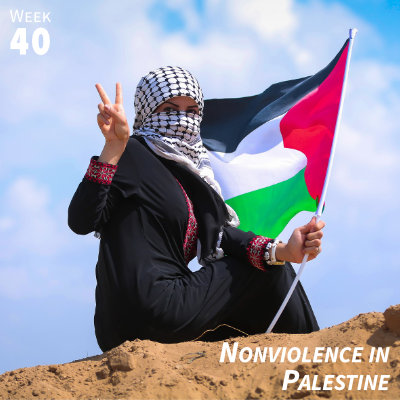 October 2 is the International Day of Non-Violence, celebrated annually by the United Nations on the birthday of Mahatma Gandhi. Dedicated to teaching “the universal relevance of the principle of non-violence” and working “to secure a culture of peace, tolerance, understanding and non-violence,” it is an international holiday that is dear to the Kumi Now community. This week, we look at the organizations and individuals working on all sides of the conflict in Palestine and Israel to bring a just solution through nonviolence. Here’s what you need to know about nonviolence in Palestine and Israel and what you can do so that together we can rise up.

First, we must work to change the world’s perception of Palestinian resistance and Israeli aggression. For the reality is that Israel has, recently, won the war for the hearts and minds of the world (or at least American politicians) through a propaganda campaign that paints Palestinian resistance as violent, Israeli aggression as defensive, and any criticism of Israeli policies or actions as antisemitic.

The presumption that the Palestinian struggle is mainly violent is disturbing. And the dismissal of the people who have sacrificed time, money and even their lives to fight injustice with nonviolence is callous.

Although Palestinian nonviolent resistance dates back to the early 1900’s, the image of armed and violent Palestinians still prevails …

Navigating children through militarized checkpoints, attempting to harvest crops while being attacked by Israeli settlers and living in a tent near the home recently taken over by settlers are all forms of nonviolent resistance or as the Palestinians call it sumoud or steadfastness.

Bono, Kristof, and President Obama should not discount the millions of Palestinians who are struggling against daily obstacles peacefully. Nonviolent resistance in addition to protests includes blogging, boycotts, and creating youtube videos.

It would benefit Bono, Kristof and President Obama to take the time to learn about Palestinian history and meet some of the living Palestinian and Israeli Gandhis active today.

Eli Massey, in an article titled “What Israel Fears Most,” outlines the lengths that Israel goes to in order to cover up the peaceful nature of Palestinian resistance and to paint all Palestinians as terrorists:

Because what Israel fears more than suicide bombings, Hamas rockets, and stone throwers, is a genuinely nonviolent resistance movement that insists on self-determination, democracy, equality, peace, and justice for all. Indeed, in one Wikileaks cable from 2011, an Israeli military official conceded as much, explaining, “We don’t do Gandhi very well’ and went on to make clear their intention to ramp up violence against protesters ‘even if the demonstrations appear peaceful.”

Mazin Qumsiyeh wrote his book Popular Resistance in Palestine: A History of Hope and Empowerment precisely to counter misrepresentations of Palestinian resistance and to communicate the efficacy of past popular resistance movements and potential for future movements. He starts with the successes of nonviolent resistance under Ottoman rule and traces the relationship between armed and civil resistance up to the current international BDS movement and the publication of the Palestine Kairos document (see Week 48).

Examples of nonviolent resistance in Palestine that activists should know about include:

The defeat of the Great Revolt left a generation of political leaders dead, imprisoned, or deported. After World War II, the United Nations partition of Palestine, and the ethnic cleansing of the Nakba, Palestine was left with brutal military rulers that oppressed local organizers and cut them off from international activists. According to Qumsiyeh, “The decades to come would prove that it was a catastrophe for the whole region … because it ushered in a volatile period that was to include many wars, acts of violence on all sides, but still more outstanding acts of popular resistance.”

Starting with Palestinian peasants attempting to return to their homes and lands, popular resistance after the Nakba “slowly gained in strength and saw its fruition in the formation of Palestinian organizations with sophisticated political structures.” These included the Arab Popular Front, the Land Movement, the Arab Jewish Committee, Palestinian student leagues, Fatah, and General Union of Palestinian Students (GUPS). The Palestine Liberation Organization (PLO) was founded in 1964 but initially sidestepped both traditional Palestinian leadership and grassroots activists, before being taken over by Fatah and other factions following the defeat of Arab forces in 1967. It “expanded into all sectors of Palestinian life in exile. The Palestinians under the umbrella of the PLO soon forced a supine and reluctant world not only to recognize their existence but also to recognize that they had a national liberation struggle with political goals that were to be respected.”

Despite the losses of 1967 (the Naksa), the groundwork was laid for a new generation of popular resistance. Key movements include:

One of the most notable moments of the First Intifada was the 1988 tax revolt of the residents of Beit Sahour. They then discarded their Israeli IDs. The siege and harassment of the town was only ended “due to bad press and international outrage.”

The outcome of the First Intifada was mainly a success: international attention was brought to the Israeli occupation, numerous U.N. resolutions critical of Israel were passed or raised (before being vetoed or opposed by the U.S.), and Israel was forced to participate in the Madrid Conference of 1991.

The nonviolent resistance efforts in Palestine and Israel continue to grow. It would be impossible to list them all, and such a list would soon be out-of-date. However, there are continued ongoing campaigns that you should know about:

Israeli politicians like to describe their country as the only democracy in the Middle East. This seems to blind them to the reality of how they treat Palestinians, refugees, and other minorities in Israel and all of the Palestinians living under occupation. But as we explain in Why Nonviolence?, the rights of oppressed and minority peoples to advocate for their human rights using the tools of civil and nonviolent resistance is enshrined in international law. Israel can only ignore these rights while the world’s population remains in the dark about the nature and goals of Palestinian nonviolence, and the righteousness of nonviolent resistance in general.

Nonviolence is a core value of Kumi Now for all of the religious, ethical, philosophical, legal, and practical reasons mentioned here and throughout the book. As such, we will dedicate this week to bringing awareness to the many organizations, individuals, and campaigns using nonviolent resistance throughout Palestine and Israel to effect change, and highlighting ways that you can become more involved.

My activism is political, social, and cultural. One of the most important challenges I face is the fact that I live in Gaza, which has been under siege for more than seven years now (since 2007). I have missed several opportunities to travel and study abroad because of the blockade. This blockade is fatal not only for my freedom and liberty of movement, but also for my intellectual and cultural development. I am very ambitious, but the conditions of the blockade, the war on Gaza and the occupation (both direct and indirect) prevent me from achieving what I wish to achieve.

I am active in the Boycott, Divestment, and Sanctions campaign against Israel, known internationally as BDS. I joined the campaign directly after the war on Gaza in 2008–2009. One of the most important factors that pushed me to do so was the helplessness I felt during the war. I consider the Boycott campaign to be a weapon of resistance and a chance to show the world the real face of Israel.

I would like to stress that ending the occupation is a necessity, because it is illegal. I do not think that by ending the occupation we can guarantee a solution to the Palestinian-Israeli conflict. We must still talk about the return of the refugees. I support the idea of living in a single democratic and secular state for all, regardless of any differences of race, religion or gender. I would also like to see some cultural life in Gaza; we have no theaters here, no cinemas, and no concerts.

During the assault on Gaza, I was active on an individual level and focused my work on supplying humanitarian aid during the “humanitarian ceasefires,” which were generally violated by the Israeli army.

I also wrote in English about my experience and the reality I was living, and published this writing on the Internet so the world could see the daily life in Gaza under the airstrikes and destructions.

I do not think there is a single person in Gaza who was not hurt during the war. I think we all suffered at least psychologically, even though we tried not to let it show sometimes. During the last assault, I lost several friends and relatives. Others have become handicapped or homeless after their houses were destroyed, while other friends lost their jobs, after their workplaces were bombed.

We live in the city of Deir al-Balah, in the center of the Gaza Strip, which is why many relatives sought refuge in our house, even though it was no longer safe. No place in Gaza was safe, and now no place in Gaza remains undestroyed or free of suffering. There is no electricity, no potable water, no emergency medications, and no infrastructure. There are thousands of destroyed houses. To top that, no one can leave the Strip. Education is in bad shape as well and there is a considerable increase in unemployment.

My activities are not free of challenges and social pressure that seek to disturb or stop it. But I am of the opinion that the occupation feeds this pressure. For example, if Gaza were not under siege, I could have moved to any other place in Palestine in order to work and be independent. However, the current situation only increases the social pressure and this ties me down.

When I exercise my activism in Gaza, I do not face the occupation directly, but it is there, lurking in every corner of the Strip. The occupation fights us from a distance; it is a hindrance to our lives and our work without direct engagement.

Originally published by CWP in “This is What Happened: Testimonials of Women Human Rights Defenders Resisting the Israeli Occupation.”

It is time to do some self-promotion! Find a way to promote Kumi Now by speaking about it to a friend, sharing your experience doing Kumi Now with your religious community, giving a presentation on it to a class at school, and/or posting about Kumi Now on social media. You can say something like, “I believe nonviolent action is a powerful way to resist injustice and bring peace to Palestine” and share the link to our Kumi website.

Include a link to this page of the Kumi Now website along with the hashtags #Nonviolence, #KumiNow, and #Kumi40.

Conflicts can only be resolved politically and legally, on the basis of parity of rights and the global rule of law. All, without double standards, should adhere to U.N. Security Council resolutions and international law, including the Geneva Conventions. No state is above the law. To resort to violence as an instrument of change should be rejected. However, that should by no means lead us to suppose that we should hold a passive attitude to the circumstances that confront us.

Our road to renewal and to a just peace is to be “truth-tellers.” The “cover-up” is the tool of our contemporary culture. Half-truths and lies fill government halls, institutions, and the media. As Jeremiah declared, “They all deceive their neighbors, and no one speaks the truth; they have taught their tongues to speak lies” (Jer. 9:5). It is our duty to tell the truth, to uncover our scars and wounds. This requires great courage, yet it is the way by which we disarm the principalities and powers whose lies and deceit are fed by silent cooperation.

From “Violence” by Jean Zaru, a Palestinian Christian woman who is a Quaker and pacifist, in her book Occupied with Nonviolence.