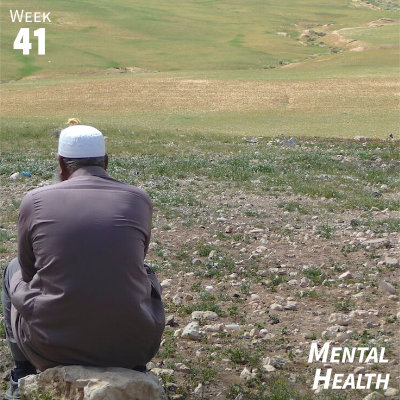 Mental health is too often a taboo subject even in the healthiest of societies. But in societies torn apart by violence or affected by constant hardship mental health can become an even more difficult subject to address. World Mental Health Day, celebrated on October 10, was founded by the World Federation of Mental Health to raise awareness of mental health issues around the globe and direct resources where they are needed. One such area is Palestine, where the constant use of tear gas, night raids, checkpoints, and other forms of psychological warfare take their toll in the West Bank and the combined injustices of the blockade of have created a society on the brink of crisis in Gaza. Here’s what you need to know about mental health in Palestine and what you can do so that together we can rise up.

The people of Palestine face staggering concrete problems imposed by the Israeli occupation—targeted killings, intermittent bombings, detainment, maiming and torture, economic impoverishment, home demolitions, restricted movement, loss of airways, roads, agriculture, and infrastructure—but there is in addition the intangible burden of psychological damage which these physical violations impose on victims, families, and witnesses. This damage is no accident, since maximizing injury to the morale of the Palestinian community has long been an explicit goal of Israeli policy. In this way, the Palestinians have been the object of intense, prolonged, deliberate psychological warfare and humiliation aimed to erase their identity as a people.

The pervasive nature of this threat can be appreciated through observing, as an example, one single issue: detention by Israeli forces, which is so commonplace that approximately one-third of all Palestinian men have been in detention since 1967. Hundreds of Palestinian children are detained—some for an entire lifetime. Torture in detention is common, and large numbers of detained children report sexual abuse as a standard technique of interrogation. The problems posed by detention (and the often-associated torture) is a major public health threat, with many long-term negative consequences for the well-being of children, adults, and families, since almost every family in Palestine has had one member in detention and often many members.

Mental health clinicians in Palestine thus face complex challenges. Since the population overall is chronically victimized by systemic violence, many individuals suffer symptoms of anxiety, depression, and trauma-related syndromes. The economic impoverishment and political chaos inflicted by the occupation, on the other hand, disrupt the processes of adequate planning, funding, administration, training, and overall functionality of the Palestinian health sector. As a result, there are many Palestinians suffering from psychological effects of the occupation and a very small number of clinicians, clinics, hospitals, and supportive services.

Beyond this, mental health clinicians in Palestine are challenged by forms of mental suffering which do not fit well within the established diagnostic categories currently in use for individual patients within Westernized systems of medicine. Palestine is a “people-culture” with a strong sense of and communal identity; the damage to well-being inflicted by the occupation too is a collective as well as an individual injury.  Individualized therapies are not fully adequate to address the psychological needs of the community which has suffered an assault on its collective sources of identity, resilience, value, and meaning. There is a need not only for expanded services in Palestine, but for expanded research that seeks to address collective identity in positive ways.

And finally, clinicians in Palestine suffer themselves from direct assaults on their bodies and spirits as members of a besieged community and secondary trauma related to what they witness and observe in their patients. The economic, social, and professional isolation imposed on all Palestinians also afflicts the community of mental health workers, who lack access to the training and support available internationally through a global community of colleagues.

While mental health is often overlooked when we talk about victims of occupation, the harm is real and far-reaching. And unlike physical violence, where their is a clear cause and effect connection between an act of Israeli violence and a Palestinian injury, mental violence comes from many angles and in many forms. Thus, while ‘mental health’ might not occur in the title of many reports on the occupation, it is often noted in the effects.

In particular, the United Nations has acknowledged the mental health issues of the blockade of Gaza. In 2005, the UNRWA began the Community Mental Health Programme “to assist Palestinian refugees in the Gaza Strip who had lost their ability to cope with the deteriorating conditions.”

Other organizations and programs are trying to help fill the need, but there is much to be done. Through the week, Kumi Now will publish articles and stories from those organizations highlighting efforts to address mental health.

The USA-Palestine Mental Health Network (USA-P MHN) supports colleagues in Palestine, represented by the 20,000 members of the Palestinian Union of Social Workers and Psychologists (PUSWP). Here is one personal story illustrating our struggle in solidarity with them:

In 2018, the PUSWP issued a call asking professional people internationally to stay away from a 2019 conference planned in Tel Aviv by the International Association for Relational Psychoanalysis and Psychotherapy (IARPP), as part of a larger call for avoidance of academic and cultural meetings in Israel. In this spirit, the USA-P MHN wrote the IARPP Board of Directors, asking them to reconsider the choice of Israel. The Board refused. The USA-P MHN then launched a global petition asking for reconsideration of the Tel Aviv location, in teamwork with the UK-Palestine Mental Health Network and Jewish Voice for Peace, now signed by over 1,400 professionals. The USA-P MHN also asked for a table at the literature section of the upcoming 2018 IARPP meeting to be held in New York to explain our position. IARPP refused the use of a table.

Undaunted, the USA-P MHN then rented a room at the same hotel during the time of the four-day 2018 IARPP conference in New York—a time slot chosen so that it did not conflict with any scheduled IARPP speaker—to hold a free-of-charge alternative panel on mental health, called “Voices on Palestine.” The USA-P MHN cordially invited the IARPP Board. They did not reply but launched two manipulations to prevent our event from taking place.

First, the hotel phoned the USA-P MHN to request that we dissolve our room-rental contract, explaining that IARPP had complained that the USA-P MHN intended to “disrupt” their meeting. The hotel—fearing a public disorder—then requested the New York police to be present during our event. When the IARPP’s distortions of fact were clarified however, the hotel permitted our event to move forward.  Second, the IARPP scheduled a memorial service for one of its recently-deceased members at the same time-slot as the “Voices” event.

Considerable pressure was brought against the IARPP Board by several of its own members—some of whom withdrew from the organization in protest and some of whom withdrew from making presentations in protest—as well as by activists and health workers internationally. The Board finally relented and changed the memorial service to a different day. And after considerable international pressure, the IARPP at last agreed to notify its membership of the “Voices” event on its own website.

The “Voices” event then took place on June 15, 2018, with 150 mental health clinicians filling the conference room and spilling into the hall. Four expert panelists from Palestine, Israel, and the U.S. presented witness accounts of mental health realities in Palestine, complete with an exciting long-distance report from a child psychiatrist in Gaza. Many members of IARPP and its board were present, and a vigorously honest discussion ensued. We noted that the Homeland Security forces as well as the police were posted outside, but the participants in support of Palestine were not to be silenced.

This week, help us inform mental health workers around the globe of the mental health crisis in Palestine. You can help by reaching out to your local mental health clinics and practitioners and doing the following:

Asking that they read and sign the Mental Health Workers’ Pledge for Palestine: https://usapalmhn.org/mental-health-workers-pledge-for-palestine/

Telling them that USA-P MHN and the UK-P MHN send delegations of clinicians and human rights workers to Palestine to introduce them to their colleagues in the West Bank and East Jerusalem who are involved in the daily work of mental health practice and human rights advocacy.

Sharing a report with them on mental health in Palestine. You could print out a copy and/or send it to them digitally. We suggest:

“A Decade of Distress: The harsh and unchanging reality for children living in the Gaza Strip” from Save the Children.

Share your messages to local mental health providers on social media, tagging them whenever possible. Include a link to this page of the Kumi Now website along with the hashtags #KumiNow and #Kumi41.

In the field of medicine, we often speak of the social determinants of health. In Palestine, not only social, but political determinants of health have a grave impact on the wellbeing and mental health of our community. I am not just talking about the political blackmail through recent blatant cuts of the U.S. administration of millions of U.S. dollars from East Jerusalem hospitals and defunding UNRWA educational and health services, but also through the daily realities of dismal work opportunities, a vacuum of leadership, the threat of political detention haunting our youth, and the pervasive experiences of loss and grief. Centuries of political oppression has created a cascade of damage to collective identity and individuals’ personalities.