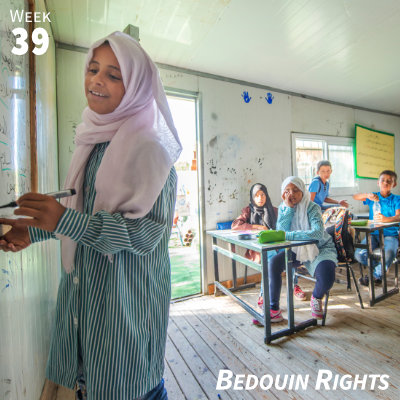 Refugee Bedouin communities in Palestine and Israel have experienced decades of home demolitions and forcible transfers along with virtually non-existent services. In September 2011, Israel adopted the Prawer Plan. One of its goals was to relocate 40,000 to 70,000 Negev Bedouin from their chosen homes to government-mandated lands. Here’s what you need to know about Bedouin villages such as Al Khan al-Ahmar and what you can do so that together we can rise up.

The Bedouin are a minority group often singled out by Israel for harassment. Israel’s failure to understand the traditional nomadic Bedouin lifestyle and efforts to get them to settle permanent villages and integrate into mainstream Israeli society—while at the same time coveting Bedouin land for use by the state and Jewish Israelis—eerily mirror American mistreatment of Native American tribes as they were forced onto reservations and their land was used for European settlers and fortune seekers.

In their entry for Kumi Now, the Regional Council of Unrecognized Villages explains the current situation:

“In Israel there are dozens of Israeli-Arab communities that the state of Israel does not recognize, either by intentionally not placing them on the map or by refusing to provide them with services. Some 224,000 Bedouin lived in the Naqab in 2014, around a quarter in unrecognized villages, according to Israel’s Central Bureau of Statistics. Ironically, the majority of these communities existed before the establishment of the State of Israel. But the government continues to deny them recognition and has deemed many of the lands belonging to these communities as ‘agricultural lands,’ so the people who live in them are considered illegally squatting on the land by the State.”

Adalah explains, “The state denies the inhabitants of these villages access to basic services such as water, electricity, sewage, education, healthcare, and safe roads. The state deliberately withholds these services in order to “encourage” the Bedouins to give up their ancestral land.”

While Israeli pressure on and mistreatment of the Bedouin goes back to the founding of Israel, Israel’s recent mistreatment roughly follows what is referred to as the “Prawer Plan.”

Adalah, in their entry, provides a history of the Prawer Plan:

“In 2011, the Israeli government approved the Prawer Plan. The fundamental aim of the plan is to forcibly displace the Bedouin citizens in the unrecognized villages to concentrated, government-planned townships in the northern Naqab, and to expropriate their lands. In 2013, following popular demonstrations and extensive international pressure, the Israeli government froze legislation that would have facilitated the discriminatory plan through law. However, toward the end of 2016, Israeli Minister of Agriculture Uri Ariel declared his intention to promote an amended version of the Prawer Plan in the near future, which is in fact little different from the original plan.

“Despite rejection of the plan by much of the Bedouin community, and strong disapproval from the international community, the Prawer Plan is being implemented on the ground. Israeli authorities are demolishing and razing hundreds of homes, structures, and agricultural fields every month, and thousands of Bedouin families are being evicted or coerced into leaving their lands. The plan is therefore grossly violating the rights of Bedouin citizens to property, dignity, equality, adequate housing, and freedom to choose their own residence.”

While Bedouin communities in the Naqab of Israel faced Israeli meddling starting in 1948, many Bedouin resettled in the Jordanian-controlled West Bank. These tribes too would find themselves under Israeli occupation when Israel occupied the West Bank. Jahalin Solidarity in its entry tells us what happened to those villages, and focuses on one village facing imminent destruction, Al Khan al-Ahmar:

“When Israel occupied the West Bank in 1967, the Bedouin were mostly left alone, although the military took over large areas of land in that region in the 1970s for ‘security’ and then gradually ‘gave’ those lands to the settlers, to develop Ma’ale Adumim and Kfar Adumim settlements, next to Al Khan al-Ahmar village. This changed following the 1993 Oslo Agreement, when Al Khan al-Ahmar became a part of Israeli-controlled ‘Area C’ (which accounts for 60% of the West Bank).”

What happened next was that “In 2010, Regavim, a rightist settler group, lobbied for the removal of the village and demolition of the iconic ‘car tyres’ school, built in 2009, so that more settler homes could be built…” In 2012, Israel announced a plan to relocate the village. Residents rejected that plan. In 2015, the village’s solar panels were confiscated, and in 2017 they were told that they must move to a site near a garbage dump. In 2018, the Israeli High Court ruled the military could begin demolishing the village. The case went to appeals, and an alternate location was offered. This location is near a sewage treatment plant.

The fight continues, with the village facing frequent harassment from Israeli settlers. And sewage from the nearby Israeli settlement has been leaked multiple times, creating a sewage lake near the village.

The world has been clear in their condemnation of Israeli treatment of the Bedouin: The European Parliament passed a motion warning that the destruction of Al Khan al-Ahmar would be a “grave breach of international law.” And Adalah states:

“The United Nations and the European Parliament both criticized the original Prawer Plan and called for its cancellation. The United Nations Committee on the Elimination of Racial Discrimination (CERD) urged the Israeli government to withdraw the Prawer Plan on the grounds that it was ‘discriminatory’ and would ‘legalize the ongoing policy of home demolitions and forced displacement of the indigenous Bedouin communities.’

Further, in a report released in February 2014, the U.S. State Department called the treatment of the Bedouin one of Israel’s “most significant human rights problems,” noting that relocation would require them “to give up claims to land they had [inhabited] for several generations and would separate them from their livelihood.”

With the international community and United Nations clear on both the illegality and immorality of Israel’s treatment of Bedouin villages one would hope that Israel would reconsider its harsh treatment of the Bedouin tribes. Alas, civic and military officials seem deaf to these arguments and continue to push pro-settler plans. The courts have been more restrained, but that restraint has only served to slow the tragedy of the Bedouin villages so it plays out over years and decades. This means that Bedouin communities are living their lives year after year with, at best, a sense of uncertainty as to their futures. It also means that constant work and effort are required to keep up challenges in the courts and to keep the public aware.

Through the week, Kumi Now will play its part by sharing and publishing a variety of stories from these and other organizations about how Bedouin communities and their allies are defending their lands and communities.

I’d also like to speak English. There’s an English teacher here. Her name is Sahar. She teaches us the letters and how to read properly. Here the English teacher explains everything and helps us to understand the general idea. The teachers are very supportive because of the threat of demolition.
Some girls’ fathers refuse to send them to school but my father lets me go. They study because the school is here but they won’t go if it’s far away. They are allowed to go because it’s nearby.

There is a girl in my class from another community. She is the best in our class. She’s very, very smart. She gets the best marks in all the exams. She has a lot of work at home because she’s the eldest and because her mother is very ill she has to help her grandmother with the animals. So she won’t be able to study if the school is far away.
The principal said that if they demolish the school we will set up a big tent and study in it. Also for the young children that weren’t in kindergarten. There was a kindergarten here, some time ago, but then a strong wind hit it.

Smuggle a sheep to Israel! Minister of Agriculture and Rural Development Alon Schuster needs to know that the Bedouin people should be free to control their own communities. You can send a picture of a sheep (or goat or camel) to Alon Schuster. You can draw a sheep, or find a photo on the internet. Get creative and write a message on your picture such as the phrase, “If you really want to respect the Bedouin people, their lands, traditions, and communities, abandon the Prawer Plan!”

You can send it via fax at +972 03-9485835 or via email at (aschuster@knesset.gov.il and moked.sherut@moag.gov.il). Or you can even chat with a member of the office online. Next, share the picture you sent on Twitter, Facebook, or Instagram and encourage others to carry out the same action. Include a link to this page of the Kumi Now website along with the hashtags #AbandonthePrawerPlan, #KumiNow, and #Kumi39.

“In their ruling, Justices Amit, Meltzer, and Baron described an imaginary world with an egalitarian planning system that takes into account the needs of the Palestinians, as if there had never been an occupation …

This ruling shows once again that those under occupation cannot seek justice in the occupier’s courts. If the demolition of the community of Khan al-Ahmar goes ahead, the Supreme Court Justices will be among those who will bear responsibility for this war crime.”

“That this House … believes that the demolition of these buildings would be a flagrant disregard by Israel of both the will of the international community and the international legal order; further notes that the coercive environment of threatened demolition, illegal settlement expansion and forcible displacement are a daily reality faced by communities in the occupied Palestinian territories.”

“In their ruling to authorize the village’s demolition the justices have given the state a green light to embark on a campaign of mass destruction and deportation of some 20 other Bedouin communities in the same area.”

“‘With this shameful and manifestly unlawful ruling the Supreme Court has confirmed a pattern of complicity in the crime of forcible transfer of Palestinian communities for the expansion of Jewish only settlements. The court has not only completely denied the petitioners the protection provided to them by International Humanitarian Law, it has also validated the discriminatory policies of the Israeli authorities. If the international community does not immediately take the necessary action to stop this crime from taking place, thousands of other Palestinians surrounding Jerusalem and in the Jordan Valley will now face an imminent risk of forced displacement.’ …

Forcible transfer of people under occupation is a serious breach of the IV Geneva Convention. The deportation or transfer of all or parts of the population of the occupied territory within or outside this territory constitutes a war crime under Article 8 of the Rome Statute.”