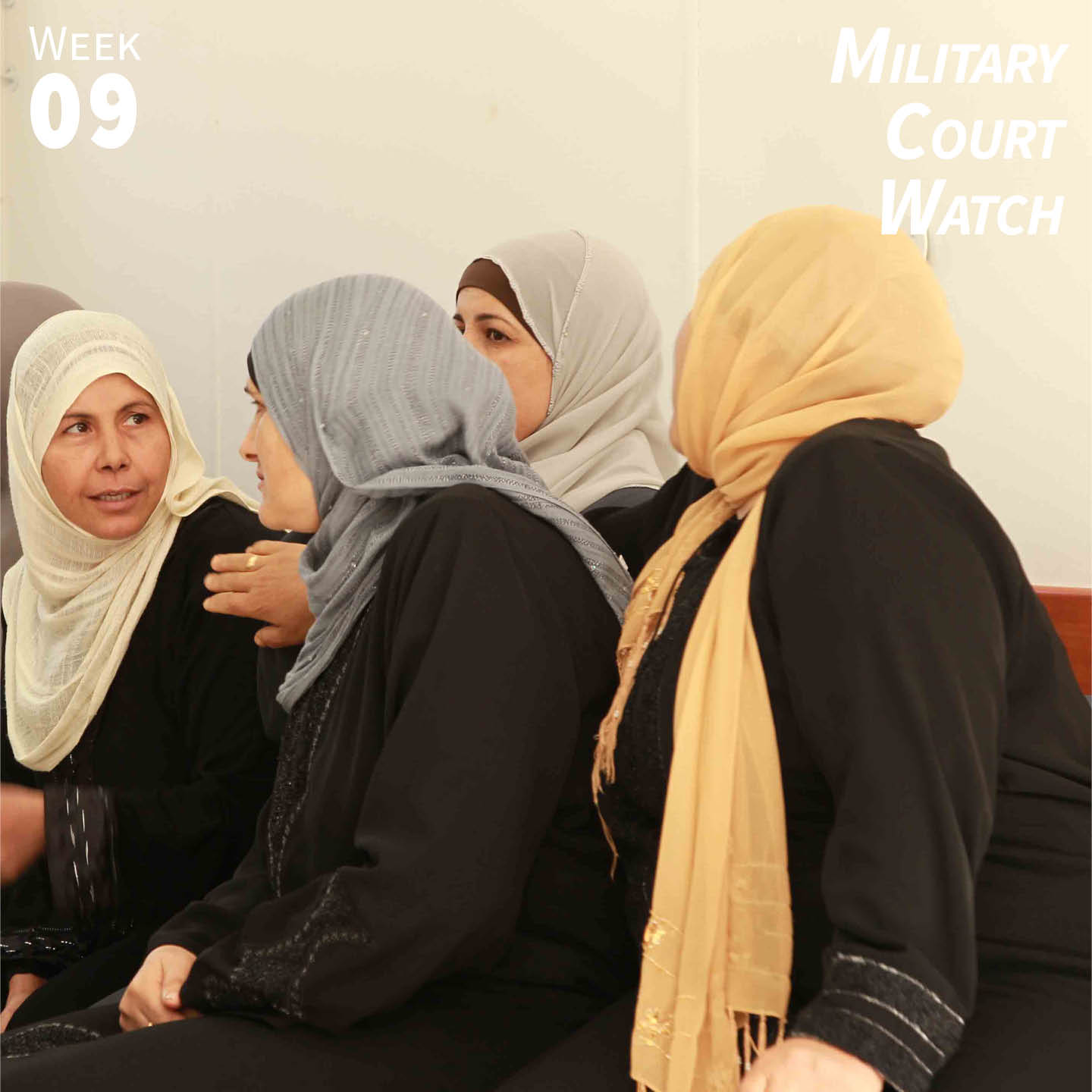 Many of the injustices committed against Palestinians combine in the use of night arrests and military prisons to traumatize children most of all. Military Court Watch (MCW) is dedicated to publicizing and countering this process. Here’s what you need to know about Palestinian children in the Israeli military system and what you can do so that together we can rise up.

Military Court Watch (MCW) is a registered non-profit organization that monitors the treatment of children in the Israeli military system. The organization monitors 13 issues of concern and focuses on the first 24 hours of arrest because that is when most allegations of abuse and denial of rights occur. The organisation is guided by the principles that all children detained in the system are entitled to all the rights and protections guaranteed under international law and no state is permitted to discriminate between those over whom it exercises penal jurisdiction based on race or national identity.

Since its foundation, MCW has established a reputation as a professional, independent, and non-political organization producing reliable tools for policy makers, diplomats, lawyers, journalists, and others. This is a strategy aimed at influencing discussion and decisions in a measured and objective fashion. As part of this strategy MCW seeks to engage with more conservative audiences in order to change opinion, as opposed to engaging with those who already share similar views.


Over the years, MCW or its board members have played key roles in the production of some landmark reports as well as award winning documentaries (ABC Four Corners, Stone Cold Justice) that have furthered this strategy. Most recently, MCW assisted Breaking the Silence on its book project marking 50 years of occupation by briefing and taking a number of internationally renowned authors to the military courts. The resulting book, Kingdom of Olives and Ash (2017), included two pieces on children in military detention (Ayelet Waldman and Arnon Grunberg) and a third author, Nobel prizewinner Mario Vargas Llosa, wrote an op-ed published in El Pais following his visit to the military courts.

Since its foundation, MCW has collected nearly 500 testimonies and conducted hundreds of briefings and visits to the military courts, addressed thousands of individuals, given dozens of media interviews, and written dozens of op-eds, reports, and U.N. submissions. MCW has conducted speaking tours to the US, UK, Germany, Netherlands, and Norway and continues to explore legal options in multiple jurisdictions.

The result of this exposure is two-fold. The issue of children held in Israeli military detention has significantly raised the political agenda. Progress in regard to each of MCW’s 6 recommendations has also been made.

You can find Military Court Watch on their website at http://www.militarycourtwatch.org/. Or find it on Twitter at https://twitter.com/MCourtWatch.

For the past 50 years Israeli authorities have operated military courts in the West Bank which have been used to prosecute many thousands of Palestinian civilians, including minors (12-17 years), for offences ranging from acts of violence to peaceful protests and traffic offences. While international humanitarian law allows for the establishment of military courts during times of military occupation to try civilians in specific circumstances, a military occupation is required to be temporary in nature.

Evidence indicates that as Israel’s occupation of Palestinian territory has completed its fifth decade, fundamental principles of international law are being eroded and individual rights ignored with corrosive consequences for societies in the region and beyond. The evidence includes a report published by UNICEF in 2013, which concluded that “the ill-treatment of children who come in contact with the military detention system appears to be widespread, systematic and institutionalised.”

Further evidence compiled by Military Court Watch in 2016 indicates that the majority of children resided or were arrested within an average of 1.02 kilometres from a settlement, checkpoint, or major road used by settlers (Route 60 and 443).
While a rule-based approach alone will not achieve peace, MCW believes that any attempt to achieve a resolution divorced from the existing international and domestic legal framework is also unlikely to produce a just and durable peace, and, in turn, may do irreparable harm to the legal framework and institutions established in the aftermath of World War II, with implications extending well beyond the region.

In pursuit of these principles, MCW investigates, litigates, advocates, and educates in the region and beyond.

While a state of occupation exists, MCW advocates, as an interim measure, that the following six recommendations should be effectively implemented immediately in order to protect children who come in contact with the military detention system. The intention must be to avoid entrenching military occupation or facilitating a “best-practices” occupation.

These recommendations have been carefully selected based on a number of considerations. First, the recommendations primarily embody existing legal rights under Israeli military and civilian law, as well as accepted norms under international standards for juvenile justice. Second, were these recommendations to be substantially implemented, the military court system would not be able to maintain its current conviction rate of 95 percent for minors, thereby loosening the controlling effect the system has on the civilian population.

On February 1st, 2017, a 14-year-old boy from Beit Ummar, West Bank was arrested by Israeli soldiers at 3:00 a.m. He was interrogated for 2 hours before being informed of his right to silence.

“The soldiers took me outside the house where they tied my hands to the front with three plastic ties: one on each wrist and one connecting the two. Then they walked me for about 10 minutes towards Route 60 and took me to a bus for troops with other detainees. I sat on a seat.

“The bus drove to the nearby settlement of Karmi Zur and then to Etzion. At Etzion I was taken to a room where I sat on a bed but I could not sleep because the soldiers were making a lot of noise. Then I was taken to a doctor who examined me while I was still tied. I remained in the room until around 9:00 a.m. when I was taken for interrogation.

“I was interrogated while tied. The interrogator accused me of throwing Molotov cocktails and pipe bombs at soldiers. He interrogated me for about four hours.

“About half way through the interrogation he showed me document which said I had the right to remain silent but he did not say anything about the right to consult with a lawyer. When I denied the accusations he slapped me on the face and painfully twisted my ear.

“Then I was taken to see a policeman who printed out my statement after he asked me the same questions and told me I had the right to silence and the right to consult with a lawyer. The statement was written in Hebrew and the interrogator asked me to sign it and I did without understanding what it said. Then they took my fingerprints and my photograph and then strip searched me and took me into a cell. There they removed the ties and I remained in the cell until around 8:00 p.m.

“At around 8:00 a.m. some soldiers shackled and handcuffed me and took me to the back of a police car where I sat on a seat. The car drove for about 90 minutes to Ofer prison. At Ofer I was strip searched again and taken into Section 13.

“The following day I was taken to Ofer military court. My parents were not notified so they did not attend but my lawyer was there. I had four additional hearings which my parents attended and I was allowed to speak to them.

“On the last hearing I was sentenced to two months in prison but my lawyer was able to get me out in return for a fine of 2,000 Shekels (about $600 USD). I also received a suspended sentence of three months valid for two years. I was released from Ofer on 9 February 2017 and I arrived home with my parents at around 6:00pm.”

Host a potluck and a screening at your home, school, church, synagogue, etc. of the documentary Stone Cold Justice, which can be found here at http://www.militarycourtwatch.org/video.php?file=L1N7EQz6UZa21873AagKps9MB8i. Share a photo from your potluck or film screening on social media. Include a link to this page of the Kumi Now website along with the hashtags #KumiNow and #Kumi9.

“Journey into Hades: Diary of a Palestinian in an Israeli Prison” by Salah Ta’mari and “To the Children” by ‘Abdallah Radwan

“The moment the door of the cell has closed, I felt deserted. The rest of the world was on the other side, a united front against me. Then the old giant within me rose to protest: ‘You are not alone! So many others are with you or struggling for you. Don’t give in to abandoned feelings! Don’t give in to the present moment! In this instant you make your own history, so do it the best way that you can…

Before that brave voice within me could catch his breath to continue, I answered ‘Oh, but I hurt! Pain, agony, I don’t know what I am, I want to see things, I am sick of walls, I want to sleep, you say it is a womb but I call it a filthy horror!’”

By Salah Ta’mari, one of the founding members of Fatah in 1965 who was arrested in Sidon, South Lebanon, and held in solitary confinement for several months.

This country suffering under the waves of dying—

Who can recreate it?

Who can return the love of the sun to us,

The love of our country?

Who can bury this fear dark as night?

Besides the little children of my country?