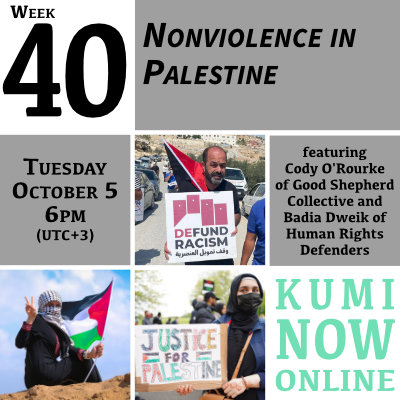 On October 5th we learned about the Palestinian nonviolent struggle against occupation. Our guests were Badia Dweik of Human Rights Defenders and Cody O’Rourke of Good Shepherd Collective.

Cody O’Rourke has been working in Palestine since 2005 when he went on his first delegation with the Christian Peacemaker Teams and has been living full time since 2012. He’s the co-founder of the Good Shepherd Collective. In addition to the Good Shepherd Collective, Cody is providing communications support in the campaign to Defund Racism, a national call from Palestinians to disrupt the flow of material and political resources to Israeli settler organizations.

Badee Dwaik is a resident of Hebron and a committed practitioner of nonviolent resistance. He is poet, writer, lover, revolutionary .He has travelled and spoken widely in the context of his advocacy for the occupied city and its people. He has a BA degree in Social Work from Al Quds Open University and has been involved in many trainings, workshops, seminars and conferences throughout the world, regarding peace, justice, and the freedom of Palestine. A noted poet and author, his work has been published in several newspapers and in on-line forums. His poems focus on the actions he has taken part in, most notably, Bab al- shams (Gate of the Sun). He was one of the main organizers of the protest that took place in January of 2013 regarding the Israeli occupation, and continued expansion of illegal settlements.

Badee has been fighting for justice for his people since the first intifada, at the age of Fifteen and has been arrested and detained about 19 times. His first arrest was at the age of 19, after the Oslo accords were signed. He was sentenced to 3 years in prison and was subjected to harsh interrogations, During his stay in prison, he spent his time studying and learned to know the act of peaceful protest even stronger, and accepted the fact that not all Jewish people were against the Palestinians, and has worked with the extensively in the struggle for human rights, peace and freedom.

Kumi Action is at:
https://kuminow.com/nonviolenceinpalestine/#kumiaction

It is time to do some self-promotion! Find a way to promote Kumi Now by speaking about it to a friend, sharing your experience doing Kumi Now with your religious community, giving a presentation on it to a class at school, and/or posting about Kumi Now on social media. You can say something like, “I believe nonviolent action is a powerful way to resist injustice and bring peace to Palestine” and share the link to our Kumi website.

Include a link to this page of the Kumi Now website along with the hashtags #Nonviolence, #KumiNow, and #Kumi40.

It only takes a minute! Sign the petition at https://defundracism.org.

While you’re there, sign up for the newsletter and think about how you can pass along the website and petition to others.