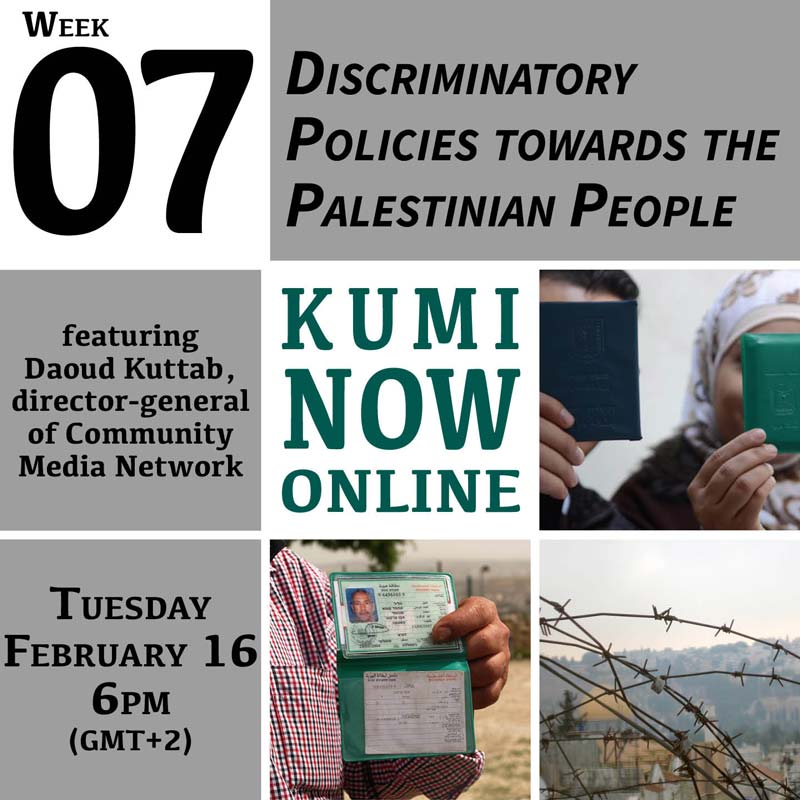 We learned from those on the ground in Palestine who are fighting against the discriminatory policies that seek to divide Palestinians from one another. Our guest was Daoud Kuttab, a regular columnist for Al-Monitor’s Palestine Pulse and director-general of Community Media Network.

Daoud Kuttab is a Palestinian journalist, a media activist and a columnist for Al-Monitor’s Palestine Pulse. He is a former Ferris Professor of Journalism at Princeton University and is currently director-general of Community Media Network, a not-for-profit organization dedicated to advancing independent media in the Arab region. He was also a founder of AmmanNet.net, Jordan’s first community radio station, back in 2000.

He has received a number of international awards, including the CPJ Freedom of Expression Award, the IPI World Press Freedom Hero, PEN Club USA Writing Freedom Award, the Leipzeg Courage in Freedom Award, and the Next Foundation (UK) Peace through Media Award.

His writing has appeared in, among other places, the Huffington Post, Palestine News Network, Al Arrabiya.Net, the Jordan Times, the New York Times, the Washington Post, the Los Angles Times, the Daily Telegraph, and Tokyo’s Shimbum Daily.

Also, we can’t not mention the fact that he was a writer for the Palestinian version of Sesame Street.

Palestine Pulse: https://www.al-monitor.com/pulse/palestine where he recently published an article on increased violence in Arab communities in Israe. And here’s his just-published piece on Project Syndicate.