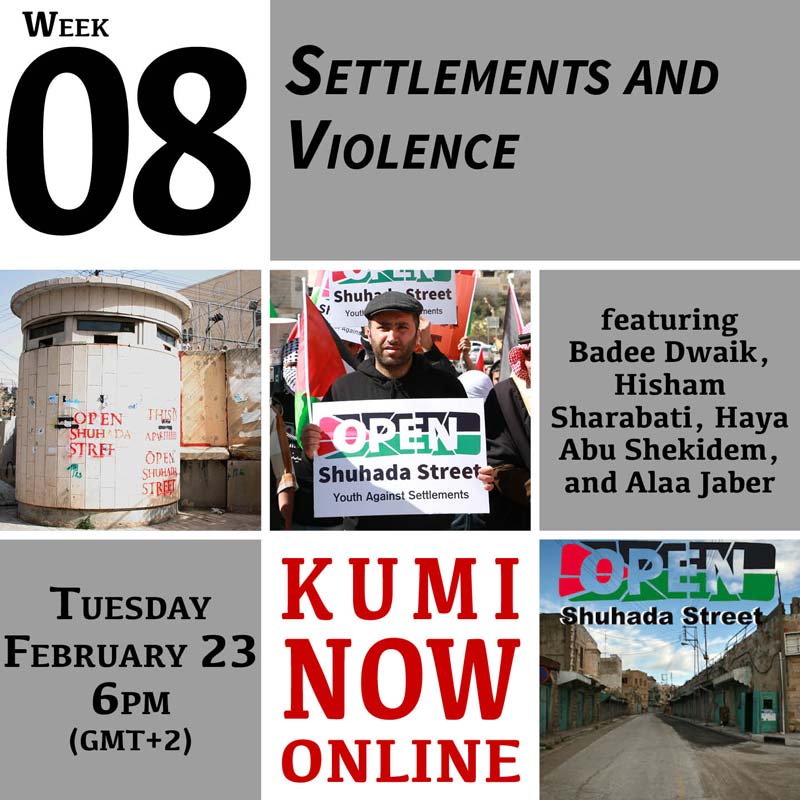 We learned about Israel’s settlements in the West Bank and the violence they bring. Our guests included Badee Dwaik, president of the National Association of Human Rights Defenders, Hisham Sharabati, coordinator of the Hebron Defense Committee, Haya Abu Shekidem, journalist and activist in the Human Rights Defenders Association, and Alaa Jaber, an activist and resident of the old city of Hebron.

Badee Dwaik is head of the National Association of Human Rights Defenders in Palestine and a founder of the “Capturing Occupation Camera project” with his partner Imad.

He joined the struggle for the freedom of Palestine at the age of 15, when he participated in the First Intifada that began in 1987. He has been arrested and detained more than 19 times by the Israeli occupation. The first time he spent three years in prison, less than 20 years old.

He, along with his friends and allies, haven founded the international campaign to lift the closures on Hebron, under the name #DismantleTheGhetto, using the month of February as a month for activities in solidarity with Hebron, where the massacre of the Ibrahimi Mosque took place on February 25, 1994.

The YouTube channel of his Capturing Occupation Camera Project is at https://www.youtube.com/channel/UCcp4VPvAxptCYutqEqf7SJA

Hisham Sharabati is a Palestinian political analyst living in Hebron, a field worker with the Palestinian human rights organization Al-Haq and a coordinator and co-founder with the Hebron Defense Committee, a nonviolence resistance group that works against the colonial presence and the occupation in the city of Hebron and all forms of colonialism and racism in Palestine.. You can hear him interviewed on a past episode of Palestine Remembered.

He studied Journalism and worked in the media field for local and international media for long, currently he works as a field worker for the Palestinian Human Rights organization Al-Haq. He documents the occupation’s  violations in the city of Hebron and also the violations of the Palestinian Authority departments.

He is based in Hebron where he lived most of his life seeing the growth of the colonial settler enclaves in his city that inspired him to take an active role in the resistance.

Haya Abu Shekidem is a journalist and activist in the Human Rights Defenders Association. Haya Abushkhaidem graduated from Bethlehem University in 2016. She started her career as a journalist working with a local media and news outlet (PNN).

In 2019, she proceeded to work as a freelance journalist/producer and media consultant with different local and regional media outlets, such as Middle East Eye, 10Mojo, and Nofeedo, as well as local NGOs.

As a young Palestinian woman and activist, she has a keen eye for capturing the culture, struggles, and triumphs of Palestinian life. Thus, through her work, she focuses on telling the stories of her people, especially women, from their own perspectives.

Alaa Jaber is an activist and resident of the old city of Hebron.