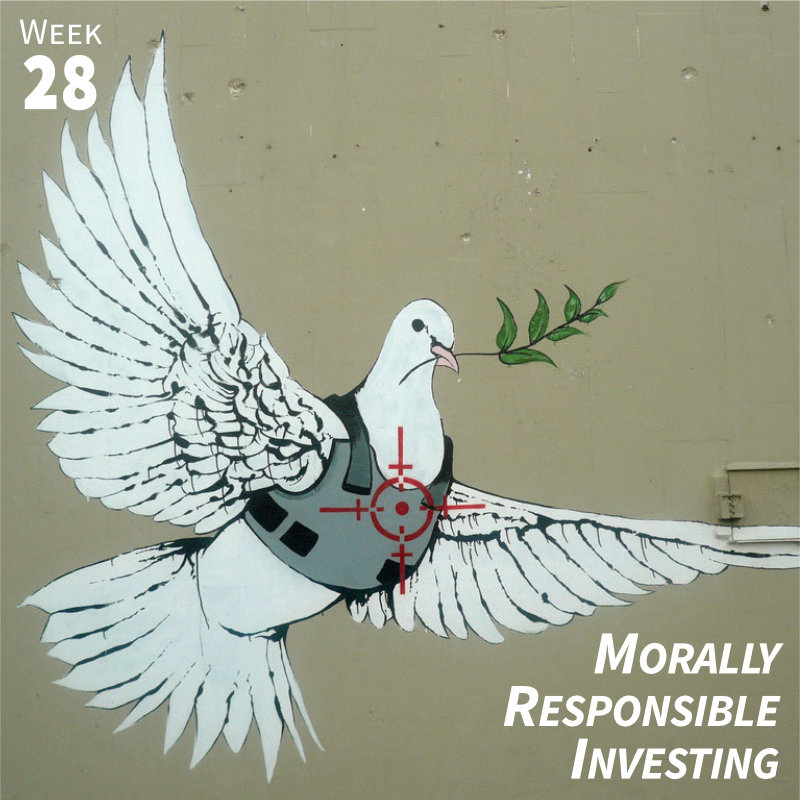 Israel’s oppression of Palestinians and flouting of United Nations  resolutions is ongoing and unwavering. Dozens of international corporations profit off this oppression by contracting with the Israeli government and participating in the construction of illegal settlements. As we mark the beginnings of the BDS Movement on July 9, 2005, here’s what you need to know about morally responsible investment and what you can do so that together we can rise up.

The Universal Declaration of Human Rights sets out that all persons, no matter who and no matter where, have the right to freedom of thought, to live free from torture, to move freely, to organize peacefully, to be represented politically, and to many other important rights. These rights form the basis of international law, which sets out clear guidelines on the responsibility of states to uphold human rights. This applies everywhere, especially in cases of conflict and occupation.

The harm caused to Palestinians by Israel’s occupation and the practices associated with the occupation breaks a wide range of international laws, including but not limited to:

According to the “United Nations Guiding Principles on Business and Human Rights,” companies have an obligation “to avoid causing or contributing to adverse human rights impacts.” This means that if they are involved, even secondarily, in any of these violations, they can be held liable. The United Nations has specified that civil society has a key role to play in helping to make sure that these standards are upheld.

Our goal, as a part of civil society, is to help Palestinians achieve their rights by insisting on Israel’s compliance with international humanitarian law. We can do so by making sure that our own institutions are not assisting or participating in human rights violations directly, or indirectly by investing in companies that do. Morally responsible investment is a part of our ethical and legal duty to prevent unlawful harm to people.

“Where you put your money, there your heart will be also” Matthew 6:21

The Bible makes it clear that the earth is the Lord’s as well as all the resources placed within it. We are stewards of these resources and our use of them is not to be driven by our self-interest and our own consumption but by care for the wellbeing of our neighbor, as well as ourselves.  We therefore have a moral obligation to use our resources and investments to promote human flourishing, to promote justice, and to end oppression and should not be investing in activities that cause harm to others or are deemed illegal under international humanitarian law.

There are multiple examples of violations of human rights in the Israel-Palestine conflict. International humanitarian law specifies that people living under occupation must be protected until the occupation comes to an end. It is illegal to build on or confiscate their land. It is illegal to kill or harm innocent civilians (whether Palestinian or Israeli). It is forbidden to employ collective punishment, degrading treatment, and torture. It is illegal to transfer parts of an occupying powers’ civilian population into occupied territories. International humanitarian law also forbids the acquisition of territory through war.

Earning money through investment in companies whose products and services are used in such a way as to violate international law and human rights is equivalent to profiting from unlawful acts and from the oppression of others.

Investment in such companies can be seen as condoning the harm of innocent civilians under occupation and the illegal Israeli settlement policies that lead to human rights violations.

Investment in such companies enables the government of Israel to sustain the ongoing violation of human rights of innocent civilians.

Continuing such investments, once the facts are brought to our attention, constitutes deliberate condoning of these practices.

We have a moral duty to withdraw our investments in these companies.

What are we asking communities of faith and religious organizations to do?

While this essay, submitted by Kumi Now partner Sabeel-Kairos UK, focuses on how churches can lead the drive for morally responsible investing, the framework can be used by any individual, school, municipality, or other community. Throughout the week we will publish stories highlighting communities that have done just that, as well as other reports and stories exploring the topic.

Essay and following story contributed by Sabeel-Kairos UK. Updated for the second edition of Kumi Now.

HeidelbergCement is a multinational corporation headquartered in Heidelberg, Germany with subsidiaries in 40 countries. The company is among the world’s largest producers and suppliers of cement and ready mix concrete. In 2007, HeidelbergCement acquired the British company Hanson plc, with its wholly owned subsidiary, Hanson Israel.

Through its subsidiary Hanson Israel, HeidelbergCement owns and operates four plants in illegal settlements in the occupied West Bank. These plants include an asphalt plant and an aggregates quarry south of Elkana near Nahal Raba, concrete plants in Modi’in Illit, and a plant in the Atarot Industrial Zone.

Materials of stone and gravel extracted from Palestinian land have been providing the raw material needed for the Israeli expansionist construction industry, without which the construction sector could not have thrived economically, generating profit for many Israeli companies. Both HeidelbergCement in Nahal Raba, and Ashtrom in Netivei Adumit and Netivei Beitar extract raw materials from the occupied Palestinian territory and supply them to Israel proper and to Israeli settlements in the West Bank.

The production of raw construction material enabled the building of Israeli settlements since the first few decades of their existence, and to this day it constitutes an important cornerstone of the physical expansion and the economic activity of the industry of the occupation.

Hanson Israel, as all companies operating illegally in the West Bank quarries, sells nearly all of the quarried stone to the Israeli market, including the settlements. In June 2013, Who Profits documented a Hanson concrete truck leaving Nahal Raba quarry to supply concrete for construction projects and the expansion of the settlement Industrial Zone of Barka. Additionally, on the 20th of June 2016, a Hanson truck was documented delivering raw material to a construction site in the Ofarim settlement in the occupied West Bank, located near the Palestinian village al-Lubban al-Gharbi, 3.8 km kilometers east of the Green Line.

Nahal Raba quarry is a 600 Dunam aggregate quarry, owned and operated by Hanson Israel. The quarry is located in Area C of the West Bank and is licensed by the Israeli Civil Administration. The adjacent Palestinian village of Alzawiyah owns the Palestinian land on which the quarry is situated.

This land was taken by Israel’s Civil Administration after declaring it to be state land, despite the fact that it was privately owned by the Palestinian villagers in the adjacent town of Alzawiyah. As mentioned by Human Rights Watch in its recent report, “Occupation Inc.,” in 2004 Israel built the separation wall in the area to encompass the quarry from the east, unlawfully diverting the route of the wall into occupied territory beyond the pre-1967 armistice line. Today, the quarry is enclaved into Israeli territory, while the separation wall separates the village of Alzawiyah and its rightful owners from their land and quarry.

While Hanson Israel’s income reached 17 million Euros by the end of 2015, Hanson Quarry Products’ income was 13 million Euros through the operation of Nahal Raba quarry. According to the company, its asphalt operating line in Israel achieved an increase of 2.7% to 0.4 million tons in sales volumes. Revenues of the ready-mixed concrete-asphalt business line rose by 7.0% to 221 million Euros (previous year: 207 million).

The Israeli mining companies in the West Bank operate under Israeli military jurisdiction and the Civil Administration, which issue mining permits and in return collect royalties (licensing fees for the operation of the quarries). Corporate royalties are then redistributed to the Israeli settlement construction sector and to directly fund the settlements’ regional councils, a viscous cycle that reproduces the illegality of the occupation, sustaining it economically while facilitating its physical expansion as well.

In the case of HeidelbergCement, the company has stated in a letter to Human Rights Watch that in 2014 Hanson Israel paid approximately 3.2 million Euros in royalties to Israel’s Civil Administration and an additional 430,000 Euros directly to the Samaria Regional Council for the operation of Nahal Raba quarry.

As mentioned above, any financial benefits reaped from an occupied territory without serving the occupied population, constitute a violation of International Humanitarian Law. Such practices also contradict the Oslo accords specific provisions. According to article 31 of the second annex of the Oslo accords, the rights to operate “mines and quarries” should be gradually transferred to Palestinian jurisdiction, including “licensing and supervision of the establishment, enlargement, and operation of quarries, crushing facilities and mines.” In reality, all this remains under Israel’s direct and exclusive control, through the executive arm of the Israeli Civil Administration that continues to collect royalties for the exploitation of Palestinian land and resources.

Together we can take effective action in support of human rights and justice for Palestinians. As individuals we can take bold positions, but as a collective, we can really affect change.  We have seen in recent years how churches around the world have successfully applied policies to exclude companies which profit from the occupation of the Palestinian territory from their investments.

Write to your church, company, school, place of worship, or any community you belong to and find out where/how they invest their money. Write them with a message such as, “I stand for moral and ethical investment. Yet, many companies are profiting from the Israeli occupation of Palestine. Is our community investing in these companies?” Find out whether they have an ethical investment screen, and if so, ask if it includes Israel/Palestine. If not, apply pressure for them to introduce one, using Sabeel-Kairos UK’s “Investing for Peace – a guide for local Church activists” to help you form a campaign group and take this forward in your community. Also of help will be the list of companies that the American Friends Service Committee (AFSC) has chosen to divest from.

Include the links above and share your messages on social media. Include a link to this page of the Kumi Now website and the hashtags #MorallyResponsible, #KumiNow, and #Kumi28.

A Challenge from Archbishop Desmond Tutu

“The end of apartheid stands as one of the crowning accomplishments of the past century, but we would not have succeeded without the help of international pressure—in particular the divestment movement of the 1980s. Divestment from apartheid South Africa was fought by ordinary people at the grassroots. Faith-based leaders informed their followers, union members pressured their companies’ stockholders and consumers questioned their store owners. Students played an especially important role by compelling universities to change their portfolios. Eventually, institutions pulled the financial plug, and the South African government thought twice about its policies. Similar moral and financial pressures on Israel are being mustered one person at a time. If apartheid ended, so can this occupation, but the moral force and international pressure will have to be just as determined. The current divestment effort is the first, though certainly not the only, necessary move in that direction.”

The Nobel Peace Prize recipient, the Most Reverend Desmond Tutu, is a South African Anglican cleric and theologian known for his work as an anti-apartheid and human rights activist. He is the patron of Sabeel.

“[God] will judge the world in righteousness; he will govern the peoples with justice. The LORD is a refuge for the oppressed, a stronghold in times of trouble. He does not ignore the cry of the afflicted … The LORD is known by his justice; the wicked are ensnared by the work of their hand … But the needy will not always be forgotten, nor the hope of the afflicted ever perish.”

There are several useful databases which highlight companies profiting from the occupation. The most comprehensive is by Who Profits  – www.whoprofits.org

You can also use the American Friends Service Committee Investigate database – http://investigate.afsc.org

For more on the Sabeel-Kairos UK Investing for Peace campaign please visit: http://www.sabeel-kairos.org.uk/category/taking-action/investing-for-peace/

We have a YouTube playlist with videos about Morally Responsible Investing.